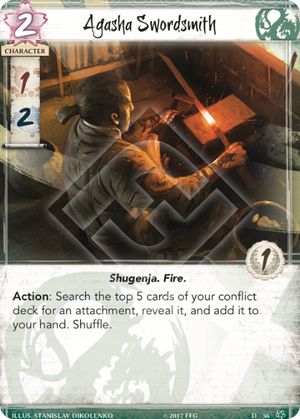 I Fight Dragons – 5/5
Repeatable tutor-draw for a card type that your deck already wants lots of? Yes please. Good stats to boot? Yes please. This card is crazy good for its cost and if it weren’t for cards like Assassination, would probably carry a Dragon deck to ludicrous levels with lots of fate.
Kingsley – 5/5
Conquest players may remember the extremely powerful Earth Caste Technician – well, Agasha Swordsmith is basically ECT except you can repeat its effect! If not for Assassinate, piling two or even more fate onto this guy might often be overwhelming, and even as it stands this is an excellent card. Players (like me) who are unfamiliar with the L5R lore may be surprised to note that this also benefits from the Shugenja trait!
Grendel – 5/5
For Real? For Real Real? This is a real card? This is a real card!
Benjoewoo – 5/5
Unless cards come out that make Fine Katana and Ornate Fan unplayable, you play this regardless of whether you’re an attachment heavy deck, because it tutors top 5 for an attachment. If naked Dragon decks become a major thing, this card loses value, but that seems unlikely any time soon.
nyxnyxnyx - 5/5
Nuts card, so let’s see some math. Without trying too hard, it’s probably reasonable to expect at least 10 attachments in a Dragon conflict deck, so that’s the number I’ll work with. For those of you who’re interested, you calculate hypergeometric probability using this site. Population size = 40 (Conflict deck size), Number of successes = 10 (the number of attachments), Sample size = 5 (number of cards Agasha sees), Successes in sample = 1. We’re interested in the cumulative probability of P(X>1), which is 0.7834, or ~78%. This means 78% of the time we will see at least one attachment when we activate Agasha (not a whiff), which is pretty okay. Each ‘successful’ use reduces your successes in sample and population size by 1 (because of the shuffle), which gradually increases your chances to whiff. Contrast this to Earth Caste Technician from Conquest (which was busted).
Unlike Shrewd Yasuki, Agasha Swordsmith’s ability can be used outside of a conflict, which means it conveniently sidesteps Assassination, guaranteeing at least one activation even if your opponent is eagerly caressing his copy of Assassination. Would recommend using the action during the first action window of the conflict phase and not your dynasty phase, unless you have 0 chance of passing first that turn anyway.

Ok, so not disagreeing this is good and a definite include, but I am finding it is not quite as good as I first though.

Like Kingsley says, it is a repeatable Earth Caste Technician. like nyxnyxnyx says, the whiff chances are very low. Even lower than he says, I reckon, as we're talking about a dragon deck: 15-20 attachments is more likely than 10, which is more like a 95% hit chance, though the repeating nature of this does mean that in late game the odds of having a deck that is mostly non-attachments does increase

The difference here is the cost: at least 2 Fate, probably more.

However, get to 4 fate invested, and suddenly you're at risk of Assassination happening. You'll have got a single card out of it for sure, so long as you remember to use it before the first conflict, but 4 fate for 1/2 and 1 card is a bad enough deal that its worth the opponent spending a card and 3 honour.

So probably the sweet spot here is putting 1 fate on the character if we're in early game, or 2 fate if the opponent isn't in an honour position to play assassinate.

Adding on cards like Reprieve or Above Question seemed like a good answer to this problem, and theoretically you could play a long term investment of this card with 4 fate on it, and then drop down a Reprieve or Above Question on it, and hope to survive long enough to get a load of cards out of it. However, those cards cost fate too, and do nothing else useful there, and are key enough cards that the Niten Adept and the big beatsticks want them more.

So anyway, my big rambling point here is that these cards are good, but they're not THAT good. Rather, they are probably worth spending 3 fate for a weedy unit and 2 extra attachments in hand. That's good, but not as exemplary as I first thought they were.

He excells with Above Question or Reprieve in my personal experience (much better than I originally thought).

Bare in mind you can fetch a Daymio's Favor in turn one, activate it and get a cheaper way of the dragon on him. Then search for another card (potentially an Above question or reprieve). That way, you duplicate the card benefit with a minor fate investment. I have pulled that move twice, and it snowballs hard in hand advantage.

A raw value of 2 for 2 is the average that most of characters have, so that more than fine. Plus, Dragon has Kitsuki's method along Ornate fans, so it's easily boostable.

But I see your concern with assassination and the fear to invest hard on it. As you said, it can be interesting to invest just 1 fate and taunt your opponent. A lot of times, he wont assassinate it just in case you inted to put attachments on him. Then you pass and he lost the opportunity to deal with him. After conflicts have been declared, you play way on the dragon on him and start activating twice (next turn you will be able to activate it twice before your oponent even has a chance to kill it).

I agree with everything said. Characters are very balanced in this game, even if it apparently doesn't seem so. The problem is that each one fulfills certain tasks, and no character excells at everything. That's the beauty of the game. The subtleness behind every choice. The Swordsmith is a great economy character that has huge synergies with Dragon attachment mechanics, but you can't solely rely on him.

Well that's a thing, Way of The Dragon. I just don't use it. Not that I think it is bad, more that there are no card slots left for it, and it gets cut.

My main thought here though is that if you invest Way of the Dragon on this character AND Above Question AND Daimyo's Favour - well, we're pretty much on our way to saying we need 3 Fate minimum there to get a return on investment.

Honestly, I'd rather save the Daimyo's Favour for when I see Niten Master!

You have 3 favors. And Swordsmith searches them really fast (it's common to have two of them for turn 2-3 with a swordsmith on the board). Anyway, that's one of the goodnesses of Dragon and Way of the Dragon: the benefit of attachments is great and versatile enough for you to adapt to your dinasty flop without waiting a lot of turns for your "needed" character to appear.

Great character. Synergyzes with the Clan and can use his ability before being assassinated. In addition, he is a shugenja.