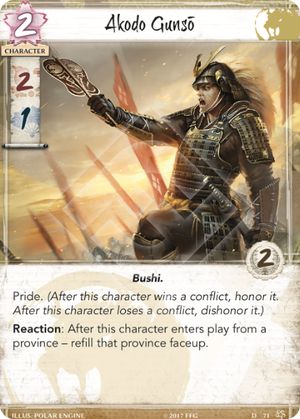 nyxnyxnyx - 4/5
It’s a neat ability that pretty much means he refills his own dynasty slot. This also works when he’s Charge’d in. Pride is a little more tricky. By default it’s a double-edged sword, but Lion has plenty of tools to make sure Akodo Gunso wins, especially on MIL, so it shouldn’t be too hard to get him to a 4/3 honored stage and avoid being 0/-1.
Kingsley - 3/5
Refilling a dynasty slot is quite strong for a swarmy deck, but aside from that this guy has little to offer IMO, with weak stats for his cost and a keyword that can often be a downside. While I do like this card as a dynasty fixer, I'm never really hyped to see him, and if I have strong plays without playing him I'll often go for those.
Benjoewoo – 4/5
Famous Bazaar that is a guy—old card reference. He’ll be useful for some time to come because he’s 1 of 2 dynasty acceleration cards for Lion. His stats are not inconsequential and he has pride, so he can become significant militarily and politically when honored. Pride will also likely allow him to fit into Lion honor decks in the event they become viable.
I Fight Dragons – 4/5
Akodo Gunso is a fantastic 2 drop that you almost always want to buy first, as he opens up more options for your dynasty phase. He doesn’t have drastically low stats for a 2 drop, either, and if his pride triggers he becomes an amazing force for the Lion player next turn, if they spent a fate on him.
Grendel - 3/5
I don’t like his stats. I don’t like his cost. I don’t like pride. I do like his ability. I often find the best play with him is with 0 fate.