85 replies to this topic

Thank you all for participating in the Spring 2020 Online Tournament! 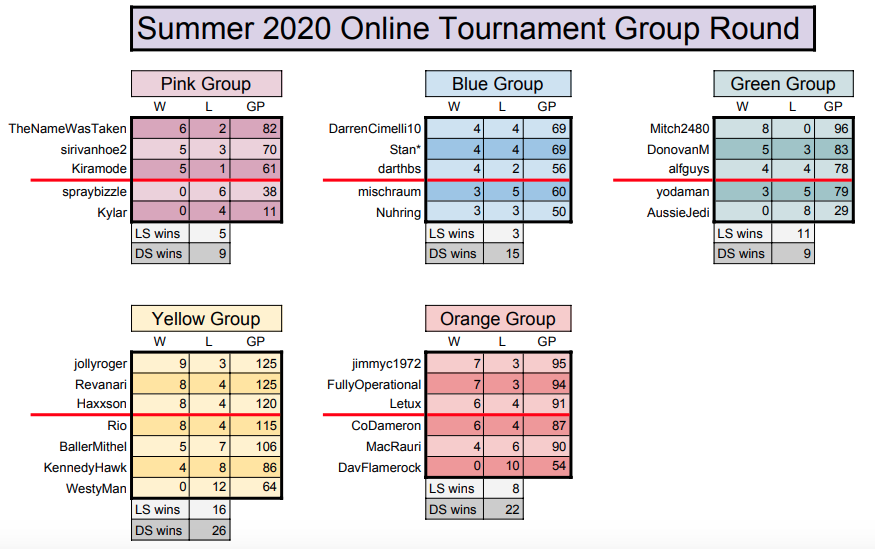 Note: DarrenCimelli10 beats Stan via the 2nd tie-breaker: He finished his matches first.

A)   IamBatman LS beats DavFlamerock’s DS with the dial at 9.  Players report

MacRauri DS beats Letux’s LS.  Letux has 2 objectives in victory pile and 2 damage on the board.  Players report:

C)   DavFlamerock wins as DS blowing up a 3rd objective.  Kiramode’s LS only finished 1 objective but has 9 points of damage on the board. players report:

Ranking at the end of the Group round will be based on the following in order:

To move the tournament quickly into the elimination round, unfinished matches without any communication with me will result in zero wins, zero game points.  To communicate with me please open a group message here on cardgamedb with me, yourself and the other player no later than Sunday August 2nd stating your availability to play with your opponent.  If the match is unable to happen I will use the communication log to try to determine a fair result.

Any player who has not finishes reported any games 3 weeks into the tournament (July 20th) will be dropped unless they communicate with me.

Given the amount of participants and the size of the groups, this tournament will have a 15-player single elimination round with the top 3 players per group being seeded!  Since we have 5 groups this time, the first seeds in each group will be ranked by comparing their records using the above tie-breaker system.  The top ranked 1st seed will become player "1A" and will have a first round bye.  That player's group will be group "A", the 2nd ranked 1st seed will become player "1B" etc for purposes of filling out the bracket.

Since the groups are not equal sizes wins and game points will be converted to per game for all first seeds.

We are pleased to announce that our Summer Champion, as well as the 2nd and 3rd place finishers, will work the the organizers of the next online tournament to influence the cardpool!

Game 1 Kiramode wins with LS with dial at 5.

Game 2 Kiramode wins with DS having lost 1 objective and having 2 damage across all objectives.

Game 1 Darren wins with DS  having 1 objective destroyed and 6 damage across all objectives.

Game 2 Anton wins with DS having having 2 damage across all objectives.

Games were strong and recorded. Check them out if you want!

Should BallerMithel have 18 game points? 12 for the win, 4 for an objective as LS and 2 for the ; damage?

Your correct, sorry. Thanks for the correction. Original post edited.

Clarification for all participants:

Reporting your match results here is equivalent to turning in a match sheet during a tournament: both players agree on the result of the match.

It is incumbent on both players to keep a legal board state.  If a card is misplayed try to correct it, but once the game has been reported that shows an agreement on the result of the match.  It is not practical to force players to replay their games or give a game loss days or weeks after a misplay is discovered.

Mitch 2480 wins game 1 as DS, yodaman destroyed 2 objectives and had 5 damage on objectives

Always enjoyable games against Mitch2480 and it's great to see him back playing the game and participating in the tourney.  He recorded our match and we will try to get it up on Yoda's Hut at some point.

I am in blue group and will be free to play games every night from 19:00 GMT-00:00 monday to friday and anytime at the weekends.. my skype email is darrenthesonofjohn@hotmail.com if anyone wants to play.

MacRauri wins game 1 as DS, DavFlamerock had destroyed 2 objectives with 1 damage on a 3rd

MacRauri wins game 2 as LS with the dial at 4

mischraum wins game 2 as DS, 1 objective destroyed, 8 damage across objectives so it's 12-7 as well

Darren wins first game as DS, mischraum destroyed 1 objective and had 3 damage across objectives so it's 12-5

Game 1: MacRauri wins as DS, LS has zero objectives destroyed and 2 damage on the board

Game 2: FullyOperational wins as DS, LS has 1 objective destroyed and 3 damage on the board