74 replies to this topic 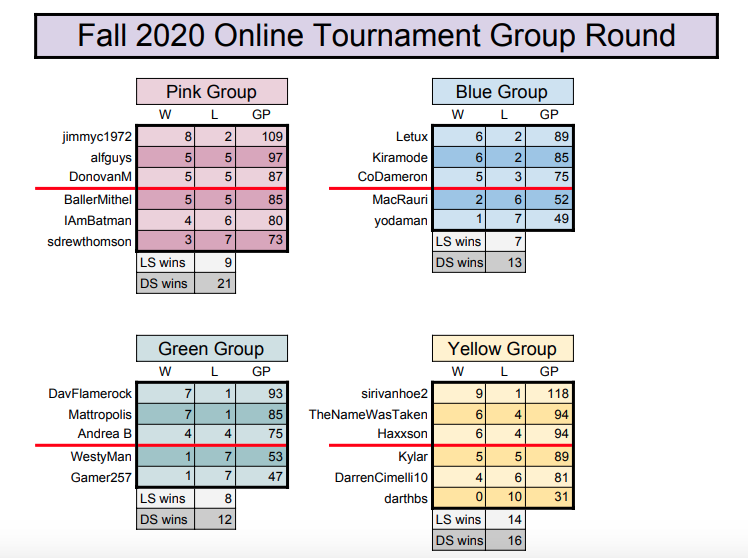 *Noted names are not on cardgamedb.  Please coordinate through Facebook.

Note: TheNameWasTaken beat Haxxson by the 4th tie-breaker!  They were tied on gamepoints and their last game was against each other, but TheNameWasTaken played their 2nd to last game first.  They both advance to the Elimination Round, but it goes to show getting your games in early can matter!

A:   IamBatman LS beats DavFlamerock’s DS with the dial at 9.  Players report

B:  MacRauri DS beats Letux’s LS.  Letux has 2 objectives in victory pile and 2 damage on the board.  Players report:

C:   DavFlamerock wins as DS blowing up a 3rd objective.  Kiramode’s LS only finished 1 objective but has 9 points of damage on the board. players report:

Ranking at the end of the Group round will be based on the following in order:

To move the tournament quickly into the elimination round, unfinished matches without any communication with me will result in zero wins, zero game points.  To communicate with me please open a group message here on cardgamedb with me, yourself and the other player no later than Sunday November 1st stating your availability to play with your opponent.  If the match is unable to happen I will use the communication log to try to determine a fair result.

Any player who has not reported any finished games 3 weeks into the tournament (Sunday October 18th) will be market for a potential drop the next week unless they communicate with me or report a finished match.

Given the amount of participants and the size of the groups, this tournament will have a 12-player single elimination round with the top 3 players per group being seeded!  The first seeds in each group will be ranked by comparing their records using the above tie-breaker system.  The top ranked 1st seed will become player "1A"  That player's group will be group "A", the 2nd ranked 1st seed will become player "1B" etc for purposes of filling out the bracket.  All first seeds have a round 1 bye in the Elimination Round.

Since the groups are not equal sizes wins and game points will be converted to per game for all first seeds.

We are pleased to announce that our Fall Champion will work tournament organizers to create the next online tournament cardpool!

Was the draw streamed and was there more to see than just the draw? I saw Anton's post with the expected time, but I couldn't be present then and now can't find the video on either of the FB groups I know of.

Was the draw streamed and was there more to see than just the draw? I saw Anton's post with the expected time, but I couldn't be present then and now can't find the video on either of the FB groups I know of.


I believe he posted it to the main FB page. In addition to the drawing we did a recap of the summer tournament and heard Josh’s thought process of designing the fall cardpool.

Kiramode wins game 1 as LS with dial at 6.

Codameron wins game 2 as LS with dial at 7.

MacRauri wins game 1 as DS, 1 objective destroyed for LS, 1 damage on board

IamBatman got the dial to 4

sdrewthomson got the dial to 6

On LS DonovanM took one objective and had 9 damage on the others.

On LS IamBatman took no objectives and dealt no damage.

Game 1: Yodaman wins with DS, MacRauri gets 0 objectives, 4 damage on the board

Game 2: MacRauri wins with DS, Yodaman gets 0 objectives, 6 damage on the board

When one side gets everything and the other nothing. SW Games are very short!

Game 1: Andrea LS wins with the dial at 8

Kiramode wins game 1 as LS with the dial at 3.

I got the dial to 9 on DS and popped one objective on LS.

Kiramode and Sirivanhoe2 each are up 2 games in their respective groups.

Just found out that I'm playing an illegal deck, for some reason I thought Obi Wan was still in the pool. Can you treat my LS win as a Loss. With Zero points. So SirIvanhoe2 (24) Darthbs (6)