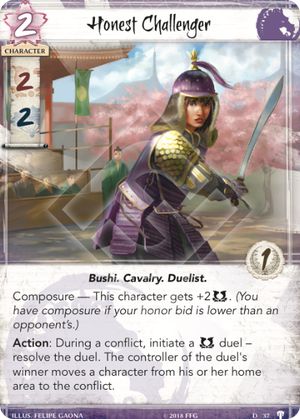 Type: Character
Cost: 2
Military Skill: 2
Political Skill: 2
Glory: 1
Clan: Unicorn
Bushi. Cavalry. Duelist.
Composure — This character gets +2[Military]. (You have composure if your honor bid is lower than an opponent’s.)
Action: During a conflict, initiate a [Military] duel – resolve the duel. The controller of the duel’s winner moves a character from his or her home area to the conflict.
Deck: Dynasty
Number: 37
Illustrator: Felipe Gaona
Want to build a deck using this card? Check out the Legend of the Five Rings Deck Builder!

It's below her - they fight their duels on very small ponies...