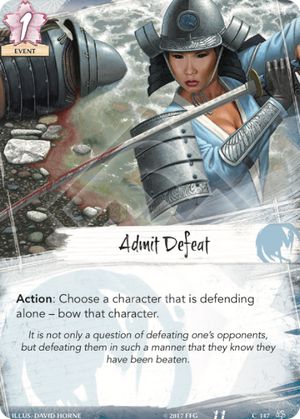 Type: Event
Cost: 1
Clan: Crane
Action: Choose a character that is defending alone – bow that character.
It is not only a question of defeating one’s opponents, but defeating them in such a manner that they know they have been beaten.
Influence: 2
Deck: Conflict
Number: 147
Illustrator: David Horne
Want to build a deck using this card? Check out the Legend of the Five Rings Deck Builder!

Kingsley - 4/5
This card has a very strong effect, though it suffers a bit from being stronger early than late - since you're less likely to have free fate early than you are late in the game, that does hurt a bit.
I Fight Dragons – 3/5
Bow effects are certainly powerful, and Admit Defeat is certainly a card that when it triggers will single handedly win you the conflict. The threat of this card means your opponent should strongly consider defending with two guys every time you attack them, which is nice passive value. This card loses a few points for being very difficult to trigger once board states get wider, and that’s usually when you want the targeted bow the most.
nyxnyxnyx - 3/5
The kind of card that provides benefits merely by existing, though it isn’t super amazing by itself. If your opponent respects that you might have it and plays around it when you don’t, you benefit. If the opponent doesn’t respect that you have it and plays into it, you benefit. Very potent in combination with other removal effects, such as Assassination.
Benjoewoo – 4/5
Card deters the currently common turn 1 play of defending with the lone fate-less person to negate Ring of Water. Combos with Kakita Kaizen to make his duel even more of a mind game. This could become a 5/5 if cost curves rise and/or meta gameplay tactics prefer going into the conflict phase with multiple fate in the pool.
Grendel - 2/5
Just a little too limited in use to be the card you want it to be.

With each game, I realized more and more that this card is powerful, very powerful. Essential combat tool for many decks. A lot of conflicts are 1vs1 out of necessity so if you use single attacker they either have to overcommit in defence opening up for you second challange (or dropping their own attack) or risk being bowed.

Works really well in military decks where it's easy to get 1 character up to province breaking levels. Commit a lone character to a province, let your opponent do whatever with what's likely to also be a lone character to try and prevent you from winning/breaking (attachments, Banzai etc), then tap them. They've wasted a bunch of tricks and you've got your break.

Agree with y'all. The big question is not to include or not, but how many copies. The card pool is so strong that I've ended on 2x.

I think 1x or 2x are probably the right choice, because it can be a dead card.