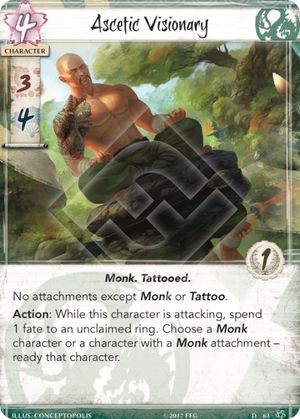 Type: Character
Cost: 4
Military Skill: 3
Political Skill: 4
Glory: 1
Clan: Dragon
Monk. Tattooed.
No attachments except Monk or Tattoo..
Action: While this character is attacking, spend 1 fate to an unclaimed ring. Choose a Monk character or a character with a Monk attachment – ready that character.
Deck: Dynasty
Number: 63
Illustrator: Conceptopolis
Want to build a deck using this card? Check out the Legend of the Five Rings Deck Builder!

I Fight Dragons – 2/5
This card suffers from a lack of real windows to make use of its ability, alongside being a 4 cost character which is expensive and needs to really impact the board consistently to be worth the cost. Since he only works while attacking, you need to either be bowed while attacking, or already of attacked or defended with a monk to make good use of his ability. What puts the nail in the coffin for this card is that he also can’t use any attachments that aren’t monks or tattoos.
Kingsley – 2/5
Ascetic Visionary has a really cool ability, but since it requires you pay a fate to an unclaimed ring it may not always be playable on the turn you buy an expensive four cost character. Further, the monk deck isn't there yet, and this guy can't even take most of your attachments! One to watch for the future but not to play until later IMO – while the stats are strong and the ability is interesting, there's too much antisynergy here.
Grendel – 3/5
I see where this character is going and I like it. Unfortunately, after Togashi Initiate and Kitsuki Investigator how much fate can you keep throwing away? As those traits become printed on potentially more powerful cards, he can change in value.
Benjoewoo – 4/5
This guy is bad in a core only environment, probably a 2 or 3 out of 5. But, of all the things to get support in the future, monks will be one of them, and this guy will get significantly better as better monks come out. He’s a large pile of stats for 4 and isn’t a slouch of an ability—it’s just not very useful now because most of the ideal targets are not monks.
nyxnyxnyx - 3/5
4 for 3/4 is pretty good, stats-wise. Tattooed Monk, okay. No attachments except Tattoos and Monks is pretty likely to be more harm than help right now, considering Cloud the Mind isn’t in every deck but Fans and Katanas are. Ready effects are great but this guy’s is a little funky, having to target a Monk or a character with a Monk, and the nature of conflicts in the LCG meaning he won’t be able to ready himself. Plus you have to ‘spend’ fate. Clunky.

That's one of the best stats for it's cost, and the ability can be played on any character with the tattoed wanderer, which will usually be on the board due to the high rating it's been given. It can also target himself in case of a bowing effect. That makes him a hard hitter just by himself, so he really has no need of attachments, which will usually go on his sidekick.

The fact that cannot be Poisoned/Pacified is huge. Oct 18 2017 03:44 AM
I run 2 of him as he's a great character to use charge on in a close battle, even better when you already have some bowed monks on the board. If I flip him early I'll usually just discard him unless I have a charge on hand. For 2 fate you can charge him in and get a 2nd use out of another monk character, that's great economy for a 3/4...and considering that Raistugu and Togashi are my main targets for Kazue (monk attachment), that could be game breaking. Situational card, but definitely worth 2 of due to the possible swing he can provide in one turn.

The fact that cannot be Poisoned/Pacified is huge.

Not as huge as the fact that he can't take 90% of the attachments that currently make up a Dragon deck.

One for the future, I think, once we can fill a deck with monk and tattoo attachments.

I've been playing him as a 2x, and I honestly can't say whether he's good or not because when he turns up in my provinces, he never seems worth playing for 4.  Time to remove him entirely, I think.

Not as huge as the fact that he can't take 90% of the attachments that currently make up a Dragon deck.

One for the future, I think, once we can fill a deck with monk and tattoo attachments.


He dont need attachments to break so you can save them for the rest of the characters. You can aid this card with events instead of attachments, but he cant be debuffed, and thats more important than the fact that cant use weapons etc you can play or build the deck around him, your enemy cant without events.

And yes, when tatoos arrive this will become an awesome guy

What, you're saying that because he has Strength 3/4 he doesn't need attachments to break?

You know that people have defenders, right? And that Dragon decks tend to have fewer events because they carry more attachments?

Not sure how 4 for 3/4 and loss of access to most of the Conflict Deck's benefits or the Stronghold's bonuses could be considered any sort of efficiency. Especially considering that staples like Above Question or Reprieve can't be offered to him either, which makes him pretty vulnerable to soft control and direct kill effects.

Compare him to Niten Master, who can ready himself usefully twice per round, and has no qualms about taking whatever attachments you can give him. THAT is the 4-coster of choice in Core set.

Until we get the tattoos and the monks, this guy is really weak.

3/4 can break a province if opponent doesn't defend. Simple. So your opponenet NEEDS a political character to defend or a province will break. He is immune to the first mirumoto's fury or similar bowing effect and posion/cloud the mind. With the imperial favor, political 5 breaks everything.

Your weapons can safely go into a Ninten Master who doesn't have a raw value of 4 (so your weapons are free to be stacked on him) and heavily depends on cards in hand to do everything the Monk does by himself. Also, he has the strongest stats so far in the game. 3/4 for 4 with NO drawbacks (but a good ability) is huge.

Maybe not suitable for every kind of deck or playstyle, but he is far from weak. At least, that's my game experience with him. With Mantra of Fire, he is very resilient and becomes a constant annoyance for my opponent.

As for value in stats, I'd note that there's many other 4-costers who are way more efficient and ACTUALLY don't have a drawback.

Honored General is effectively 4 for 5/3, with an extra useful ability on top of that, and no negative text. Bayushi Yanako can operate as 4 strength and blank in political, or 4 strength and a very powerful ability in Military. Isawa Atsuko is 4/4 on her chosen ring, and effectively even higher if defended against. Guest of Honor has 4 only in the one conflict type, but has ability text that wins games with no combo trickery required. They are the real strong 4-cost beatsticks with no drawbacks.

Atsuko's example is not valid, as you need a void ring, which is not always possible/optimum. So her skill is definitely situational (of course, you can help her with Phoenix cards, but you can also boost the Monk in other ways via events).

Yunako has 4 military and an ability that count as an average of -1 or -2 debuff, except few 3/0 and similar charcters. Against a 1/2 or 3/2 she doesn't do much else. Her strenght is against peak value characters (but then, situational) or her ability to get 4 political but no skill at all.

Honored general is really strong, indeed. But he cannot be further honored, so he cannot get to the 6 value other 4 costers can. Rather than a drawback, i'd consider that a limitation.

Visionary monk cannot have an ornate fan. But he is also immune to cloud the mind and poison. Those cards destroy every 4 coster you mentioned (except honored, he's a beatstcik, but he's Lion and we are talking about a Dragon character). And I always find a cloud the mind in my hand by turn 3. So, is it really a drawback? Is it a limitaton (like other 4 costers?). His strenght doesn't rely on the boost he gets, but very strong stats and a big pack immunities.

He's different. Players have in high regard cards like let go and Mirumoto's fury. This monk simply doesn't care. Also, if you find his ability situational, along a Togashi initiate you can pay 1 fate to ready it and get the Imperial Favor with his 2 glory value.

Of course, I still think the Crab Whitchhuner's skills is more solid. But she is a 4/2, not a 3/4 and has no immunities. Plus, the sacrificing effect needs some planning. So I think it's at the same level as others. And he will shine with a some more Monk cards.

Fair enough! I expect to be running this card in future decks, but glad to see you can make him work in core.