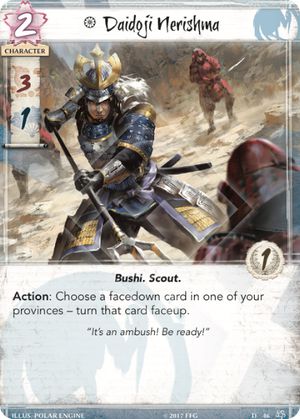 Kingsley - 4/5
The likely-to-be-misspelled Nerishma (did you know it's not spelled Nerishima?) offers solid stats and a decent utility ability. In many cases this ability may not shine for you, but it's one of few things that can save you from a bad dynasty flop, and three military for two fate is quite strong in Crane.
I Fight Dragons – 4/5
Very good stats for a 2 drop and leaning military is very nice for the politically leaning crane. His ability is useful, but doesn’t break the game. I wouldn’t give up the first passing fate in Dynasty to use it usually but it’s rather useful in the conflict phase to dig for holdings, charge targets (if you run it in crane), or to soft mulligan your flop next turn. Oh, and he’s a 2 cost unique so that’s kinda swell.
nyxnyxnyx - 5/5
Great stats, and pretty decent ability, plus he’s unique. Cost-efficient military character in a clan that lacks it.
Grendel - 5/5
Stats are above curve, Unique is more a bonus than a drawback and his ability directly counteracts that drawback. His ability while doesn’t directly contribute to the fight it smooths a bad flop and future turns. A bad dynasty flop can the decide match. He could get worse if more ways to smooth it become available, but for me this guy is a lynchpin and I would run him in every single deck in the game in the game if I could.
Benjoewoo – 4/5
This guy is auto-include in core because he’s essentially one of 3 military oriented characters and he has dynasty acceleration, few and far between now. He’s only 4/5 instead of 5/5 because it seems likely clans will get more “opposite” options and/or dynasty acceleration in the future. Not too amazed with him - mostly charge fodder but being 2 cost makes him vulnerable to Assassination. Being unique is not an advantage for cannon fodder character - if you waste action using his dupe you most likely will lose race to pass and miss that 1 fate you just "gained".