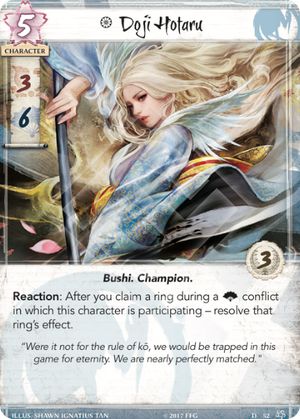 Type: Character
Cost: 5
Military Skill: 3
Political Skill: 6
Glory: 3
Clan: Crane
Bushi. Champion.
Reaction: After you claim a ring during a [Politics] conflict in which this character is participating – resolve that ring’s effect.
“Were it not for the rule of kō, we would be trapped in this game for eternity. We are nearly perfectly matched."
Deck: Dynasty
Number: 52
Illustrator: Shawn Ignatius Tan
Want to build a deck using this card? Check out the Legend of the Five Rings Deck Builder! Aug 31 2017 07:36 AM
But the timing of the second claim is after claiming the ring. So for example, if you are Keeper of Fire and win with Fire in attack, you can honour Hotaru then claim the ring then trigger the reappearance of your Keeper Initiate in your discard pile with 1 fate then trigger Hotaru to honour the 2 glory Initiate.

Kingsley - 4/5
WARNING: This card has had an unusual ruling made on it recently (as of this writing) that makes it weaker than you might think; if you use this ability after winning a conflict on defense, the attacker gets to target the ring! I quite dislike that ruling given the flexibility that Hotaru seems to have at first glance (and which was promoted in the preview articles!), as it makes her (and Toturi) into a relatively straightforward aggressor. Don't get me wrong, Hotaru is quite a strong attacker, but it's still a little disappointing. I wish she were a Courtier, though!
I Fight Dragons – 4/5
Hotaru has a really powerful effect, but it’s actually on the weaker end of clan champions overall, I think. The recent ruling for her ability on defense hurt her a little bit in this regard, but she’s still a truck on offense and still a great card overall. You also can basically consider her a 6/9 most of the time due to the extra honoring effects Crane seem to get and that is just a fantastic, beefy statline.
nyxnyxnyx - 3/5
The political half of the payoff-on-winning clan champ duo (the other half being Toturi from Lion). She cannot even trigger beneficially on defence, so you’re limited to getting her effect on ATTACK, and only in POL conflicts. Deducted points for not being a Courtier (wut?), the possibility of Captive Audience, and also the FeelsBadMan moment when you get Display of Powered. (PS: She scores 5/5 on art and waifu)
Grendel - 4/5
Double Ring effect on the attack is very good. Not as good as I thought she was when you could trigger on the defensive.
Benjoewoo – 4/5
With the current ruling that her ability is not optimal to use on defense, she is not a 5/5. She could go to that rating if an errata/FAQ was issued to change that, or if more multi-ring element/effect cards come out that Crane can use. With the only current option being air in an environment where honor victory is a lie and dishonor more incidental, she gets a 4 because she’ll often be a 6/9, one of the most powerful champions stat wise. While the effect can be game winning she is disappointing against other champions. I'd expect she will be replaced as soon as new version is released. Even her Lion evil twin is better since he has interaction with Charge and some of their cards. "Doji Hotaru's ability can also be used after you win a political conflict as the defender, not only denying your opponent an opportunity to use a ring effect, but getting to use that ability for yourself." (FFG article) Hotaru is better now than she was in core.

Firstly and most importantly, she's one of the best characters for Policy Debate.

Secondly, the meta seems to currently favour mid-high cost characters with more fate in them, and it's become very clear that she's stronger for being a Crane, because of the synergy between her stats and the Crane conflict deck.

This serves her well for moves like Outwit and Admit Defeat, with a double-Fire activation being very useful for setting up future Voice of Honor and Noble Sacrifice. Also, she's a great target for Curry Favor, either to win Imperial Favor or as first player to defend an opponent's political challenge (which folk often do second vs Crane).

My own thoughts is that she's a surprisingly synergistic character, and one that has been mildly under-rated.