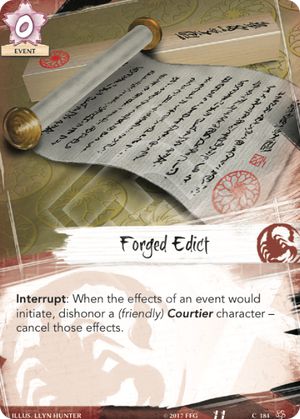 Jan 10 2018 09:45 PM
I'm not sure how well I like this card. It could be useful against Assassination, but it still causes you to dishonor a character. Only if your character is 0 glory would it help.

Fair point, but actually all the game's event-cancels (Voice of Honor, Forged Edict and Censure) are considered to be top tier cards despite their limitations.  Its rare to see a Scorpion deck that doesn't carry three of these.

Broadly, Scorpion can dishonor their characters fairly painlessly, as they have a lot of cheap courtiers that have 0 or 1 glory. More importantly, when those characters leave play, the honor loss can be mitigated by the Stronghold.

Cancelling events at a timing of your choosing is basically a very strong play in any game, as it normally represents a tipping point that makes a stack of investments worthwhile or not.

If you've dropped multiple fate on a character, then given it an attachment or two to get to break threshold, used your Way of the Scorpion to weaken the defender, used your Sinister Soshi to stack the combat maths, then you've invested a lot into the break. A single event card by an opponent can often mean the difference between success and failure - a single Mirumoto's Fury, or a single Banzai, or For Shame bowing, and so on and so forth. What's more your opponent knows that tey can do that, and can hold back to make that play after you have overcommitted resources.

In that circumstance, a cancel is a wonderful thing, as it is something that the opponent couldn't know for sure whether you have or not, and thus messes up his relative certainty of coming out on top of the exchange. When one cancel can mean the difference between break + ring effect + imperial favor or nothing being the outcome of many cards and much fate, it suddenly becomes very worthwhile to take the hit of dishonoring your Bayushi Liar.

In fact, so critical to Scorpions is this card that any decent player going against Scorpions will avoid playing any high-swing event when a Scorpion has non-dishonored courtier. Forged Edict always needs to be considered when playing against Scorpion. If you're playing as Scorpion, then you want 3 copies of this card, barring weird low-courtier builds.

The best counterplay, of course, is to drop a Steward of Law, and THEN play that decisive event, and say "oh sorry, were you planning to cancel that?"

Jan 13 2018 01:41 AM
Not only the above, but the Edict is in fact the best cancel in the game, since it's the only one of the bunch, which is active from the moment the game starts, provided that a courtier is out. And if a Scorpion player starts the game without a courtier out, he's doing something wrong. Like its attachment hate bro this should cost 1. The courtier restriction isn't really a restriction in scorp.