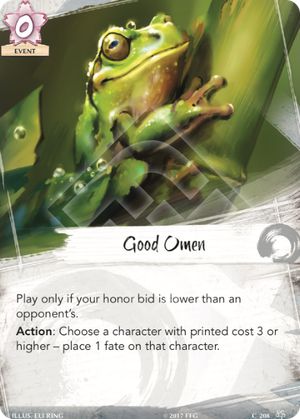 Type: Event
Cost: 0
Clan: Neutral
Play only if your honor bid is lower than an opponent’s.
Action: Choose a character with printed cost 3 or higher – place 1 fate on that character.
Deck: Conflict
Number: 208
Illustrator: Eli Ring
Want to build a deck using this card? Check out the Legend of the Five Rings Deck Builder!

Benjoewoo – 2/5
With an honor dial referencing restriction, the card may never be playable if bidding meta runs high, but it increases fate efficiency with its 0 fate cost action to add 1 fate to a 3 cost or greater character. In certain decks this can have more than minimal value given play style, so it’s 2/5.

nyxnyxnyx - 3/5
Essentially trades a conflict card for a post hoc fate on any character you want, which is a sweet deal. Not gamebreaking by any means, but pretty decent.

Grendel - 2/5
A conflict card for a fate is pretty good value. The stipulations are a bit rough and depending on the meta bidding style can reduce/increase its potential effectiveness a lot. If a deck comes around that can engineer the stipulations I could see this even being very playable in it.

Kingsley - 3/5.
While potentially quite strong, Good Omen's triggering condition may be hard to achieve. It's currently too early to tell how the meta will end up looking with respect to common bid strategies, but if your deck can consistently activate this it's solid.

It's quite nice that there's no per-turn limitation on playing this card though, so you can stack up 2 or 3 of them and play when the opportunity arises.

I wouldn't play this out of Scorpion, but in most other clans, there'll be a time when you can safely bid 1 in the mid-to-late game, safe in the knowledge that your opponent needs a higher bid to keep their hand healthy. I don't think the opportunity window is all that narrow.

Main thing is that there are so many good conflict cards, this might never make the cut. I think 3/5 isn't far off though.

Hmmmm ... I like this to fuel Wandering Ronin. Bid low if you already have attachments in hand. Potentially swing with 6-7 skill.

Otherwise (and even in this case) quite situational. Could be a clutch late-game card, though.

In mid/late game it can keep your 4-5 cost characters on the board for another turn. Considering such a brute force provided by a 0 cost card, i'd say it's wonderful (4/5). Of course, not applicable to every deck, since it requires to be able to bid 1-2 a few 50% rounds without comprimising your hand too much. would a duel change the honor dials so that this card is affected, or is the honor bid not affected by dials?

I wasn't putting this in decks because a) it seemed like the condition could be a problem, and b ) it was easy to cut instead of cards that really felt necessary.  But eventually I forced myself to try it out in decks.

Unfortunately, the condition is more of an issue for me than I originally thought.  First turn, you can usually buy not always reliably bid lower than your opponent (although one game, my opponent and I both had Good Omen in hand, and he played an expensive guy with no Fate that kind of telegraphed it - so we both bid 1).  But after that, my games tend to mostly become 1-1 every turn.  The requirement to bid LOWER and not just "hey, bidding 1 is low enough" makes it often impossible to fulfill.

would a duel change the honor dials so that this card is affected, or is the honor bid not affected by dials?

The post-duel value would count for this, yes.