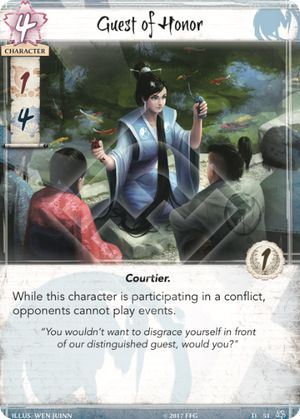 Type: Character
Cost: 4
Military Skill: 1
Political Skill: 4
Glory: 1
Clan: Crane
Courtier.
While this character is participating in a conflict, opponents cannot play events.
“You wouldn’t want to disgrace yourself in front of our distinguished guest, would you?”
Deck: Dynasty
Number: 51
Illustrator: Wen Juinn
Want to build a deck using this card? Check out the Legend of the Five Rings Deck Builder!

Kingsley - 3/5
Guest of Honor has a very powerful static ability but somewhat underwhelming stats, and Crane decks don't have to worry about events as much as some others. While Guest of Honor makes a great closer, I'm going to go out on a limb here and say she may not be as good as it seems.
I Fight Dragons – 4/5
Guest of Honor is absolutely fantastic, which one of the most powerful static effects out there. Almost every conflict deck (sans Dragon) is probably over 50-60% events, so she pretty much turns off all of the best conflict effects for your opponent if she happens to show up. I’ve won several games off the back of this ability, as it gives you a ton of insurance on final pushes for the win.
nyxnyxnyx - 3/5
Rather narrow prohibition effect. Attachments, conflict characters, all abilities on currently active cards are still on. Does do a good job sealing the deal on a specific conflict when losing on cards, and being really annoying with movement like Favored Ground / Mount.
Grendel - 4/5
This card will never stop irritating me with it’s one sided conflict card block. Can do some silly things with favorable ground or favored mount.
Benjoewoo – 3/5
She’s fairly niche now, and should rise and fall in viability with whatever the current meta is as cards come out. Because she may not always stop the meta decks effectively, even if her ability is strong, her stats don’t make up for relative inconsistency. Sorry were you going to way of lion me? fate worse than death me? charge me? censure me?

-and i'm just gonna pummel you into the ground with policy debate.

This lady is awesome in the current meta- being able to play events while your opponent cannot is absolutely op. -and most importantly she stops your opponents cancel events so stuff like noble sacrifice is guaranteed to hit.

Absolutely essential in Crane (although probably not on turn 1), and bring some favoured grounds so you can wheel her into 2 conflicts per turn if required.

Yeah she's not cheap, but when you can banzai and the other guy cant... you can make a few dudes go a long way.

Yeah, I think this card is now well recognised as a clear 5/5, as trading powerful event effects is pretty much where the meta is at the end of the Imperial Cycle.