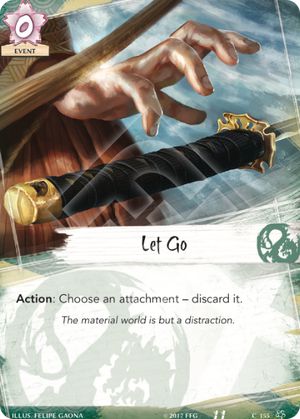 Type: Event
Cost: 0
Clan: Dragon
Action: Choose an attachment with printed cost 1 or lower – discard it.
The material world is but a distraction.
Influence: 2
Deck: Conflict
Number: 155
Illustrator: Felipe Gaona
Want to build a deck using this card? Check out the Legend of the Five Rings Deck Builder!

I am one with the wind and sky.

I Fight Dragons – 5/5
Anyone who’s talked with me about splashes knows how I feel about this card. Attachments are very good in this game for value, and every single deck has great attachments that you will probably want to remove. Thanks to a cost of 0, this card almost always goes even (dropping a Fine Katana, Fan, or other free attachment) where it’s merely fine, but once it starts trading for impactful 1 or 2 cost attachments, it starts getting into a real value territory. Do to this card being 0 and being easily splashed by just about anyone, I don’t expect many high cost attachments to be playable without a massive impact to counter-act the risk of hate cards like this. As such, this card is the very definition of a meta-defining card in my opinion.
Kingsley – 5/5
I think this card is where it needs to be power-wise – you can't really make it cost one or more because then you're down on net if you use it against various strong zero-cost attachments, most notably Fan/Katana – but I really wish it cost more influence to import, because this is going to be everywhere. If not for this and to a lesser extent Calling in Favors, I think the game would look substantially different.
Grendel – 5/5
Not sure if anyone ever told me in 2017 I’d be playing a card game where attachment hate was mainboard.
Benjoewoo -- 5/5
You play this because it's 1 of 2 attachment removals in core only, and will likely see continued play as a no cost event barring other attachment hate with greater utility at cost become popular. I don't see that trumping Let Go unless fate production numbers rise more than 1 point, and this card will see play for time to come. Also one of the primary reasons you splash Dragon
nyxnyxnyx - 5/5
Worst case, you trade exactly 1-for-1 with an Ornate Fan/Katana. Best case, you absolutely blow someone out because he played Togashi Kazue / Jade Tetsubo / Sashimono. Crazy good card in Core set meta, might change if there comes a day when no one runs attachments and there’s a risk it becomes a dead card in hand.