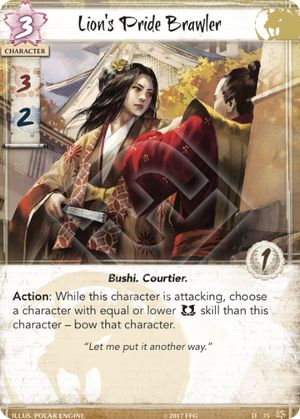 Type: Character
Cost: 3
Military Skill: 3
Political Skill: 2
Glory: 1
Clan: Lion
Bushi. Courtier.
Action: While this character is attacking, choose a character with equal or lower [Military] skill than this character – bow that character.
“Let me put it another way.”
Deck: Dynasty
Number: 75
Illustrator: Polar Engine
Want to build a deck using this card? Check out the Legend of the Five Rings Deck Builder!

nyxnyxnyx - 5/5
I think its hilarious u kids talking trash about LPB. u wouldnt say this stuff to her irl, shes jacked. not only that but she wears the freshest clothes, eats at the chillest restaurants and hangs out with the hottest dudes. yall are pathetic lol
Seriously, THE best card in the game. Every other card wishes they were Lion’s Pride Brawler, I would play 40 of her if I could. Let’s take a look. 3-cost to dodge Assassination, check. Bushi AND Courtier traits, check. (a trait combination shared only by Bayushi Shoju, a fooken Champion) 3 for 3/2/1 stats, which is fairly costed, check. Great art, check. SICK ability, check check check. Her ability is essentially one bow every turn, with extremely loose limitations. All you have to do is put her on attack, which you will do every turn, then pick a character with equal or lower MIL that doesn’t even have to be participating in the same conflict, and that character is out for the turn. At base 3 she sweeps a TON of useful characters, including champions. With the Lion stronghold she hits almost the entire cast. With any other MIL buffs, you have your pick of the entire cast of characters in the Core set. The funny thing is that it’s almost impossible to favorably ‘trade’ or ‘deal with’ LPB. You can Cloud her Mind, but you’re down a card and a fate and still have to deal with a 3/2. You could buff your MIL to guard against her ability, but then she gets to pick off someone else instead. Or, you could listen to the sage advice of someone from Discord, and commit everyone you have to defending against her conflict. (The author cannot personally recommend this move.) What actually ‘counters’ LPB… is another LPB. In a Lion mirror getting to attack first is huge, allowing some huge swings off the back of one LPB bowing out the other. Doji Challenger/Yogo Hiroue are also strong contenders with their harpoon effects, allowing them to pull LPB in on defense and ‘negate’ her ability.
Unlike Doji Challenger, LPB is perfectly capable of abusing people with - for MIL, since the RRG conveniently states that “If a skill value for a dash character is required to resolve a card ability, treat the card as if it had an unmodifiable skill value of 0.”, which makes anyone with a - instant food for LPB. I could go on and on but I think it’s enough to say that you run 3 LPBs in Lion from now until the end of the game, and smile about it.
Kingsley - 5/5
This is probably the best card in the game right now. Being able to bow at equal strength on a character with mid-high strength and easy access to buffs means that she will usually take one of your opponent's guys out of the game for a turn when she attacks. The only weakness of this card is that it is much worse when going second; I seriously wish she had been printed for Unicorn instead of Lion, as it would be a strong but subtle addition to their "going first" theme (which currently feels very weak to me, but we'll get to that later...)
Benjoewoo – 5/5
You play her. It’s hard to say she’s not one of the best cards in the game because if you’re already winning a conflict, she can bow a character outside of the conflict to increase advantage. Also a bushi and courtier, two of the most powerful traits right now.
I Fight Dragons – 5/5
If Kingsley didn’t change it for the article (Editor's note - I did), my actual rating for LPB is a 6/5 because she simply doesn’t seem to be costed on the same scale as any other 3 drop in the game. She’s got it all: 3 cost to dodge assassinate, good stats, and a great ability that bows anyone of EQUAL (for some reason) or lower military skill whether or not they are in the conflict she’s attacking in. This is in the faction with the most military pumps as well, pretty much making LPB bow whoever she darn well pleases when she attacks and it’s often your best character sitting at home hoping for a counter-attack. Are you running Cloud the Mind yet?
Grendel – 5/5
Most powerful card in core? Can run away with the game on turn 1 if the first player is Lion. Gives Shoju a run for his money at two fate less.