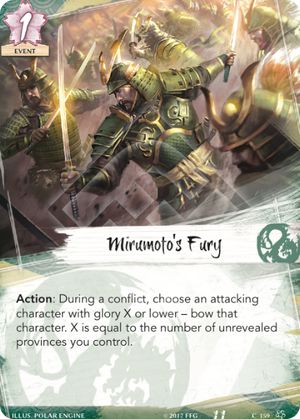 Type: Event
Cost: 1
Clan: Dragon
Action: During a conflict, choose an attacking character with glory X or lower – bow that character. X is equal to the number of unrevealed provinces you control.
Influence: 2
Deck: Conflict
Number: 159
Illustrator: Polar Engine
Want to build a deck using this card? Check out the Legend of the Five Rings Deck Builder!

I Fight Dragons – 5/5
Bow effects are good. Cheap bow effects are even better. Cheap bow effects that can hit just about any character for the first few turns are amazing. It is correct to say that this card is obviously less good once you only have 1-2 unrevealed provinces left, but that won’t happen until turn 2-4 anyways and even then this card still has value. In the early game, this card can get you really ahead as you can pay 1 to bow what is likely just a lone attacker and fizzle the entire conflict from your opponent. Thank goodness this card can only be used while defending.
Kingsley – 5/5
Another amazing card for many decks. Early in the game this will hit almost any character out there, and late in the game it will still hit a lot of the roster, especially against low-Glory clans such as Crab or Scorpion.
Grendel – 5/5
Kind of outshone by TW and Let Go, but it is a really strong effect and shouldn’t ever be forgotten when constructing your 40.
Benjoewoo – 5/5
This always bows 0 glory people, and will often always bow 1 glory people. Early game you can bow 4 glory, and often you’ll meet the requirements to bow 2-3 glory people, who are currently relatively rare. Could get worse if clans regularly start playing higher glory stat characters, but that seems unlikely given how much of a drawback that is when dishonored.
nyxnyxnyx - 5/5
Reaaaally good, considering you start with 5 unrevealed provinces and the highest Glory value so far is 4. Very easy to find a high-value target with this, especially since the Hotaru/Toturi ruling makes them go on attack more often.

Absurd. Probably one of the most annoying cards of the game, more even than Counters. Another card because you don't want to attack Dragons.

What ? You don't want to attack ? You play alone with your card and the honor counter of both ? You are a crane and you have 15 cancel because you splach scorpion ? I should not even talk about people with dubious honor who fight each other with bits of papers while wearing skirts. Tsss. I think dragon is to weak....looool. But for sure, Mirumoto fury become less essential with the new numbers of "counters" you can find now. And it's not going to get better. I think it's time to up 38 attach + 2 banzaï.