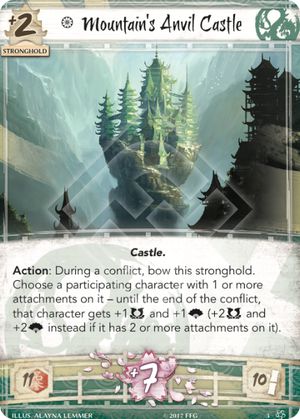 Type: Stronghold
Strength: +2
Clan: Dragon
Castle.
Action: During a conflict, bow this stronghold. Choose a participating character with 1 or more attachments on it – until the end of the conflict, that character gets +1[Military]and +1[Politics] (+2[Military] and +2[Politics] instead if it has 2 or more attachments on it).
Starting Honor: 11
Fate Value: 7
Influence: 10
Deck: Stronghold
Number: 3
Illustrator: Alayna Lemmer
Want to build a deck using this card? Check out the Legend of the Five Rings Deck Builder!

I Fight Dragons – 4/5
This is probably the strongest of the core set Strongholds. The attachment requirement is very easy for Dragon to fulfill so this Stronghold essentially gives you the ability to throw out a sizeable amount of stats in just about any conflict you want, military or political, attack or defense. Very versatile and potent.
Kingsley – 5/5
Mountain's Anvil Castle is a serious contender for the best stronghold in the core set – similar to the Crane, Lion, or Crab strongholds, this will often be a buff of +2 strength, but unlike those strongholds it can be used on attack or defense and in both military and political conflicts.
Grendel – 5/5
Can provide a +2/+2 stat bonus at the cost of 2 cards (that you were going to play anyways), works offense or defense. Just don’t set yourself up to being blown out by assassination or I can swim.
Benjoewoo – 4/5
You play this if you want to play dragon, so auto-include for now. Compared to other strongholds, this makes for interesting math tricks because normally really painful attachments, e.g. Cloud the Mind, are +1/+1 for purposes of the SH assuming you have 1-2 attachments. The fact it can be used on attack or defense in either conflict makes it very flexible, and a fairly strong contender for any attachment favoring dragon deck.
nyxnyxnyx - 5/5
11 honor, +2 province strength, good. Ability works on both attack and defence, mil and pol, though it might be tricky to get it to the +2 stage. Conveniently works with opponent’s attachments as well, so go nuts with those Cloud the Minds.