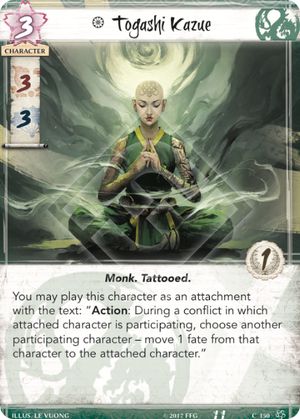 Type: Character
Cost: 3
Military Skill: 3
Political Skill: 3
Glory: 1
Clan: Dragon
Monk. Tattooed.
You may play this character as an attachment with the text: “Action: During a conflict in which attached character is participating, choose another participating character – move 1 fate from that character to the attached character.”
Influence: 2
Deck: Conflict
Number: 150
Illustrator: Le Vuong
Want to build a deck using this card? Check out the Legend of the Five Rings Deck Builder!

I Fight Dragons – 3/5
Kazue is a very powerful and flexible card. Paying 3 for 3 in each stat as a conflict character is solidly okay, and extra copies of her can keep her around multiple turns because she is unique. As an attachment, Kazue is currently a very risky gambit to take do to a strong presence of both Calling in Favors and Let Go which can blow out the game if Kazue gets targeted immediately after entering play. I expect to see her more in the future, but for now you are probably best passing her up.
Kingsley – 2/5
While Kazue's ability is really powerful, her stats don't have the raw efficiency offered by Tattooed Wanderer, and playing an attachment that costs three fate is extremely risky in the present environment. I do think she has some potential merit, since three fate for a 3/3 conflict character isn't horrible (once you compare it to anyone other than Tattooed Wanderer or Political Rival) and the fate steal can be crushing on the right board, but right now there are just too many copies of Let Go and Calling In Favors out there.
Grendel – 3/5
The effect is actually worth the cost is why this card is a bit of a trap. The problem is with a 3 fate investment, you need to affect the game now.
Benjoewoo – 2/5
She’s way too expensive as a character, and as an attachment too vulnerable to the various attachment hate cards. Could get better if Dragon get ways to play conflict/attachment characters for cheaper or if fate manipulation means Dragon will always be rich fate wise.
nyxnyxnyx - 3/5
A very expensive way to ‘super-Void-ring’ someone. Would have been an amazing effect for 2 fate, but at 3 it’s exactly at the point when you wonder if you could have put that 3 fate towards something better, like a 3-cost character perhaps….The option to do either makes it better than if it was a straight-up attachment though, and I expect she’ll still see play. Very painful to have this be Let Go / Calling in Favors-ed.

An amazing card. At the beginning I was hesitant to play her as a character, and I thought she was only viable as an expensive attachment, but fortunately it's not true. She shines in both, attachment and character types, can swing games on your favour controling the battlefield or the conflicts. Trust me, a 3/3 from hand is very powerful. I play her x3 in my deck and I'm happy with it.