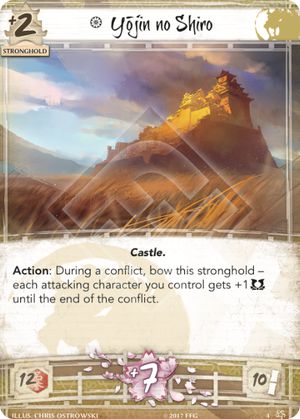 Type: Stronghold
Strength: +2
Clan: Lion
Castle.
Action: During a conflict, bow this stronghold – each attacking character you control gets +1[Military] until the end of the conflict.
Starting Honor: 12
Fate Value: 7
Influence: 10
Deck: Stronghold
Number: 4
Illustrator: Chris Ostrowski
Want to build a deck using this card? Check out the Legend of the Five Rings Deck Builder!

nyxnyxnyx - 5/5
12 honor, +2 province strength, making it the best province stats-wise of the lot. Put into perspective, you’re roughly half a card up on 11-honor clans and 1 card up on 10-honor clans. The ability, however, is pretty meh, only working on attack and boosting only MIL. Note that while it adds MIL, it’s technically usable while attacking in POL conflicts, for the purposes of stuff like Lion’s Pride Brawler and Duels. Also remember that it only buffs characters present at resolution of the ability, so characters you add in afterwards won’t benefit from it. Still a pretty good SH that will pump out 1-3 MIL reliably every turn.
Kingsley - 4/5
This isn't a very versatile stronghold, but the sheer military attack power it gives you is strong. In some cases you'll be able to use this in order to enable your card effects or disable your opponent's card effects during political challenges, but most of the time it'll just enable powerful military aggression.
Benjoewoo – 3/5
You play this if you want to play Lion, so auto-include for now. Compared to other strongholds, this is powerful, though not flexible. Not as good of a buff for Crab, but this usually ensures you win military conflicts, and will often get you a break. Also easily breaks normal buff metrics if you have 3 or more attacking characters. Could easily be replaced if there’s a different, equally strong effect on a Lion stronghold because this favors swarm over elite builds.
I Fight Dragons – 3/5
Shiro no Yojin is a stronghold that is really focused and not very flexible; but what it does, it does well. This Stronghold gives Lion an absurdly strong final push once they reach your stronghold that requires a lot to survive, and most decks simply can’t handle it. Outside of the final push, it does give a nice edge in military conflicts while the Lion player is attacking, which will happen every turn.
Grendel – 5/5
Allows multiple characters to get unbelievable values for their cost.