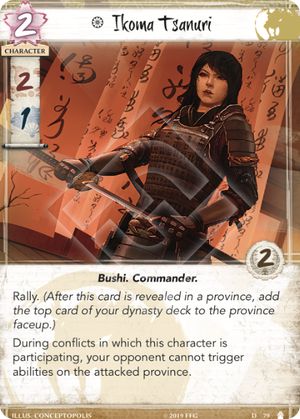 Type: Character
Cost: 2
Military Skill: 2
Political Skill: 1
Glory: 2
Clan: Lion
Bushi. Commander.
Rally. (After this card is revealed in a province, add the top card of your dynasty deck to the province faceup.)
During conflicts in which this character is participating, your opponent cannot trigger abilities on the attacked province.
Deck: Dynasty
Number: 79
Illustrator: Conceptopolis
Want to build a deck using this card? Check out the Legend of the Five Rings Deck Builder!