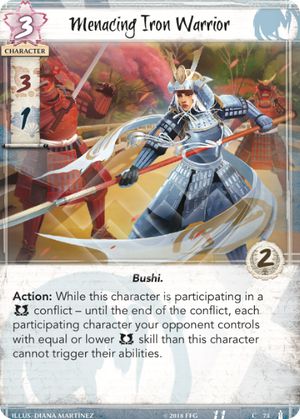 Type: Character
Cost: 3
Military Skill: 3
Political Skill: 1
Glory: 2
Clan: Crane
Bushi.
Action: While this character is participating in a [Military] conflict – until the end of the conflict, each participating character your opponent controls with equal or lower [Military] skill than this character cannot trigger their abilities.
Influence: 2
Deck: Conflict
Number: 73
Illustrator: Diana Martinez
Want to build a deck using this card? Check out the Legend of the Five Rings Deck Builder!

As I mostly rely upon my Lion Dynasty cards for effects, as I often bid quite low, this card intimidates me. If it is honoured, I have to add a lot of Mil to my chumpy guys, and I have to be careful with my big guys.

At least it is an action to set up which gives me a window. I have a feeling that many (most?) players won't really be scared by this much though.

Not sure how the ability works with the plethora of skill pumps, but 3 base military skill in Crane for 3 is nice.

The art on this card looks weird. It is as if the spear is sticking through her own armor skirt.

I am not sold of on the ability of this card. I guess it is good against prideand cards like Shrewd Yasuki (that stumbled in a military conflict) and brash samurai, but you somehow need to get this in a conflict at the right time. I think this might be the first thing you play as the defender in a challenge to turn off those effects. This seems very narrow.

On the other hand, I do like the two glory on a conflict character. It should be feasible to grab the imperial favor with relative ease with this card.

Agree the art is terrible.

Also agree the ability isn't as limiting as it might be. Sure, LPB will be annoyed, but +1 MIL isn't hard to find for Lion. Spiritcaller is outside the conflict anyway.

It's a shutdown of limited applicability applied to a limited number of conflicts. Would be worth running in a weaker dynasty pool, but not good enough for Crane, in my opinion.

Jul 17 2018 07:36 AM
It’s definitely tempting in a Crane splash, but it’s then competing for influence slots with Political Rival (which I still think is better).


Haven’t played enough main Crane to fully assess this yet, although 2 Glory on a conflict character in a clan that can honour its characters with relative ease seems.... pretty good. With a Way Of this becomes a non-Assassinateable 5 Mil for 3 fate that doesn’t lose anything stat-wise when Clouded (unlike Yoritomo).

It's a conflict card, which I didn't realise. Does that change anyone's thoughts?

I guess that helps, but it means its now competing with the same card slots as Political Rival and Steward of Law, which are far stronger cards....

The card looks pretty bad. Bad stats and an ability that your oponent can easily play around.