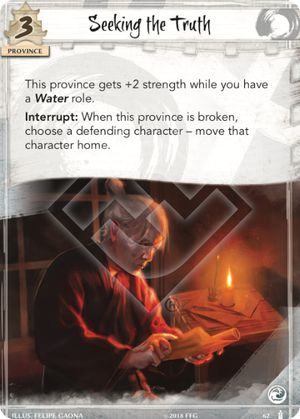 Type: Province
Strength: 3
Clan: Neutral
This province gets +2 strength while you have a Water role.
Interrupt: When this province is broken, choose a defending character – move that character home.
Element: water
Deck: Province
Number: 62
Illustrator: Felipe Gaona
Want to build a deck using this card? Check out the Legend of the Five Rings Deck Builder!

So, timing on this. It basically means you can defend it, but if they manage to break it, one of your defenders goes home before the bowing step and will be ready to do something else?

I suppose that works for the Water Role bump, meaning its one that you really don't want to break, or that encourages you to defend. I suppose if you have a way of forcing your opponent to hit it that could be okay. But then it becomes farmable safely as there is nothing you will trigger of it if it is attacked without breaking...

Hrmmm... I wan to like these provinces, but they don't quite work right yet.

I'm beginning to wonder if we'll ever get an actually decent water province.

I can get behind playing this if you have a water role. 5 strength water isn't available otherwise, and the ability ain't bad. The only requirement is that you want to defend your provinces. Breaking this always threaten a counterattack with an extra character. I can see this working out if you want to keep up with province breaks.

I don't mind playing elemental fury in my phoenix deck right now, but I do see merit in testing this one.

No, the last thing you want to do is play this cycle of provinces on-role. A 5-strength province with a break-effect is basically just farming central.

This is one of the weaker ones, I think. But given how the rest of this pack is probably the strongest of the cycle so far, I guess this is the quality balancer.

I disagree with that. An extra 5-strength province is very powerful against the decks that win by breaking your stronghold. The opposing players will need to spend additional resources to break this, and you do not even bow your defender if they end up breaking. And yes, your opponent can farm this province, a thing that I feel is overrated. You don't get infinite attempts to break provinces. Eventually you will run out of resources. You will need to either have your characters stay around way longer than your opponent, or you need to threaten a dishonor victory. You can build your deck to work well against this exact line of play.

Kudos if you can get that approach working.

For me, "resilient" provinces aren't a lot of use in the field, with the exception of Pilgrimage. I've even gone off Public Forum, as there's so much advantage surrendered when you give opponents somewhere they can "safely" attack.

A safe attack zone means they can commit minimal force and still use up a defender on your side. It means they can probe, then can play solely for ring effects, and so on.

On the other hand, those decks that give no safe place to attack are completely nerve-racking for the opponent, and number amongst the most successful tourney decks. The classic scorpion array, for example, has Meditations on the Tao as its weakest point, and most Scorpions will try and let that break as soon as possible, as it's the only point where they can get farmed.

To go full-resilient, I'd say you need to go to the other extreme where you present all resilient provinces, so you're not giving the opponent the choice between farming and resilience. Maybe you could go Pilgrimage, Public Forum, one of the new +2 strengthers, and Before the Throne, and that'd make every zone hard to break. However, in doing this you'd be surrendering so many action abilities...

The solution is to play cards that punish farmers. Examples of these are Guard duty, Fearsome mystic and Meddling mediator. You also play cards that don't mind defending, like the chikai order protector, so that you are actually only committing a 1 cost shugenja or courtier. The other thing you want to play are ways to perform a counter-attack after they realize that they need to send in a bigger force if they want to achieve anything on the attack other than taking some fate of a ring. This is done with a card like Political rival, or with a goblin sneak that has a legion of one backing him.

I think the best approach for clans that cannot run only provinces that you cannot farm is to at least make the farmable grounds hard to break. Not all opponents will care to try and win through farming rings effects after all.

Y'see I go the opposite with Crab. I run Defend The Wall on the Stronghold, then then Meditations, Fertile Fields and Pilgrimage, all of which are hard to farm on Crab. For sure, Meditations could be farmed, but playing characters without Fate gives long term advantage for Crab.

That 4th slot? Flooded Waste. It's only got an on-reveal effect, but I see its low strength as a boon, as it moves out of the way by breaking on the second attack on it, leaving nowhere for cheap farming. If it had 4 or 5 strength instead of 2 strength, I simply wouldn't run it.