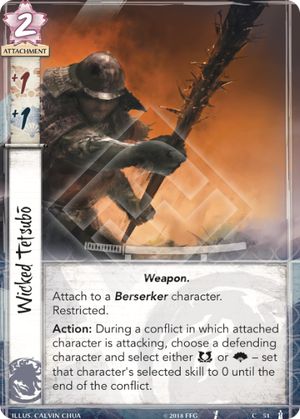 Type: Attachment
Cost: 2
Bonus Military Skill: +1
Bonus Political Skill: +1
Clan: Crab
Weapon.
Attach to a Berserker character. Restricted.
Action: During a conflict in which attached character is attacking, choose a defending character and select either [Military] or [Politics] – set that character’s selected skill to 0 until the end of the conflict.
Influence: 1
Deck: Conflict
Number: 51
Illustrator: Calvin Chua
Want to build a deck using this card? Check out the Legend of the Five Rings Deck Builder!

Ooh, more Tetsubos. That trait requirement nixes the idea of Lion/crab weapon decks though. So Crab/lion it is!

You could put it on a Matsu Berserker. That's it. That's all I got. More weapons is neat.

For sure, my friend Assassination is happy to see you put a 2-cost attachment on a 1-cost character....

Why does a tetsubo give +pol skill? It feels like this was a miscommunication between the design and theme

Why does a tetsubo give +pol skill? It feels like this was a miscommunication between the design and theme

Well, it is the kind of Tetsubo that is used to threated courtiers into silence... 'Attach to a Berserker character.'

So it means we cannot steal it with Calling in Favors?