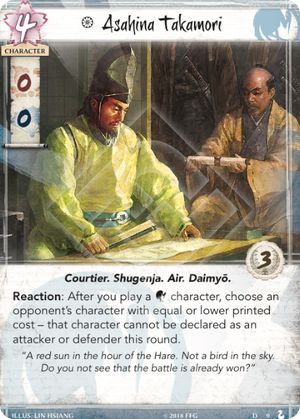 Type: Character
Cost: 4
Military Skill: 0
Political Skill: 0
Glory: 3
Clan: Crane
Courtier. Shugenja. Air. Daimyō.
Reaction: After you play a [Crane] character, choose an opponent’s character with equal or lower printed cost – that character cannot be declared as an attacker or defender this round.
“A red sun in the hour of the Hare. Not a bird in the sky. Do you not see that the battle is already won?”
Deck: Dynasty
Number: 9
Illustrator: Lin Hsiang
Want to build a deck using this card? Check out the Legend of the Five Rings Deck Builder!