New Lord of the Rings Deckbuilder

22 replies to this topic

So it has been a long time coming but the new deckbuilder is ready to use. I'm going to go over it a bit to show the improvements and changes.

First up a few small details. The new deckbuilder is redone from the ground up and as such it wasn't feasible to copy decks from the old system. I also can't guarantee that older browsers will work flawlessly. I always suggest using the latest version of your preferred browser. I like Chrome but anything recent will do. There are alot of old saved decks from over the past 4 years, many of them totally out of date. Because of this I'm going to be modifying the old deckbuilder soon to only export old decks as text. They can then be imported in the new deckbuilder under the import tab by copying and pasting the decklist. This should be a fairly painless process but I do ask that you only import the decks you actually want to keep. Eventually these old saved decks will go away and things will just have to be built from scratch. The other thing that is different is that some people had too many saved decks. I totally understand the need to have many decks saved to try out different ideas but I need to keep it to a workable number. So I've put a limit of 50 saved decks per game for the time being. Hopefully this will be enough and the number could be adjusted in the future but I think it is a reasonable amount that will encourage people to delete old decks they don't actually want. And lastly the old submitted decks section is being archived, the new decks section will not be cross posting the decks to the forums as this just caused confusion. The new submitted decks section has alot of new features though so I hope people will like visiting it.

The first and most notable change is that all card searches are done completely in your browser now. What does that mean you ask? Well it means that getting results back for your search is virtually instant now. When you first go into the new deckbuilder page it will download the full Lord of the Rings database and cache this file. The file is about 40K zipped up but if your browser doesn't support zipped files it could mean a slightly longer initial download. For those of you with larger monitors the new widescreen layout will let you see your searches happen instantly as you change the search criteria: 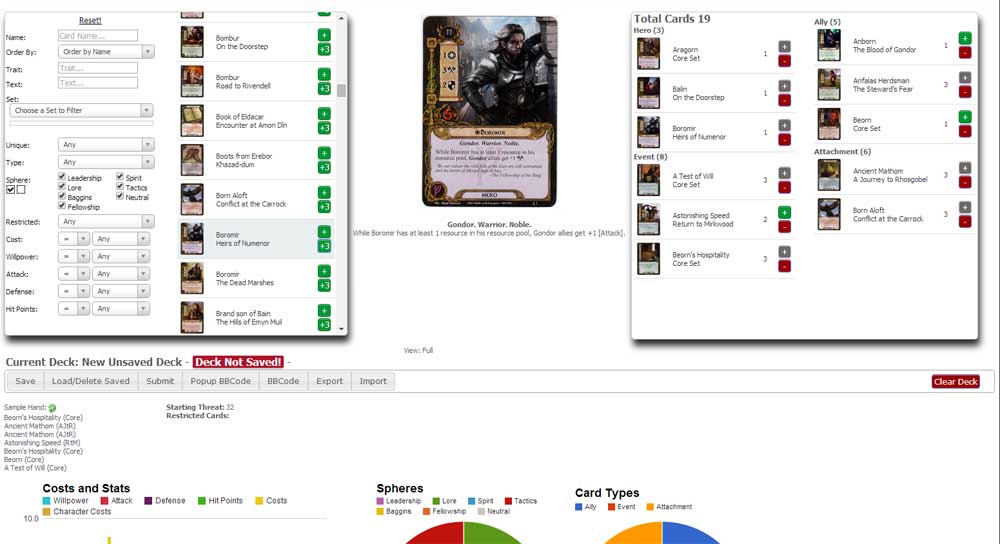 The widescreen layout will allow you to see more of your deck at a time and see your search in real time.

For those of you on smaller monitors things will collapse to give better views. 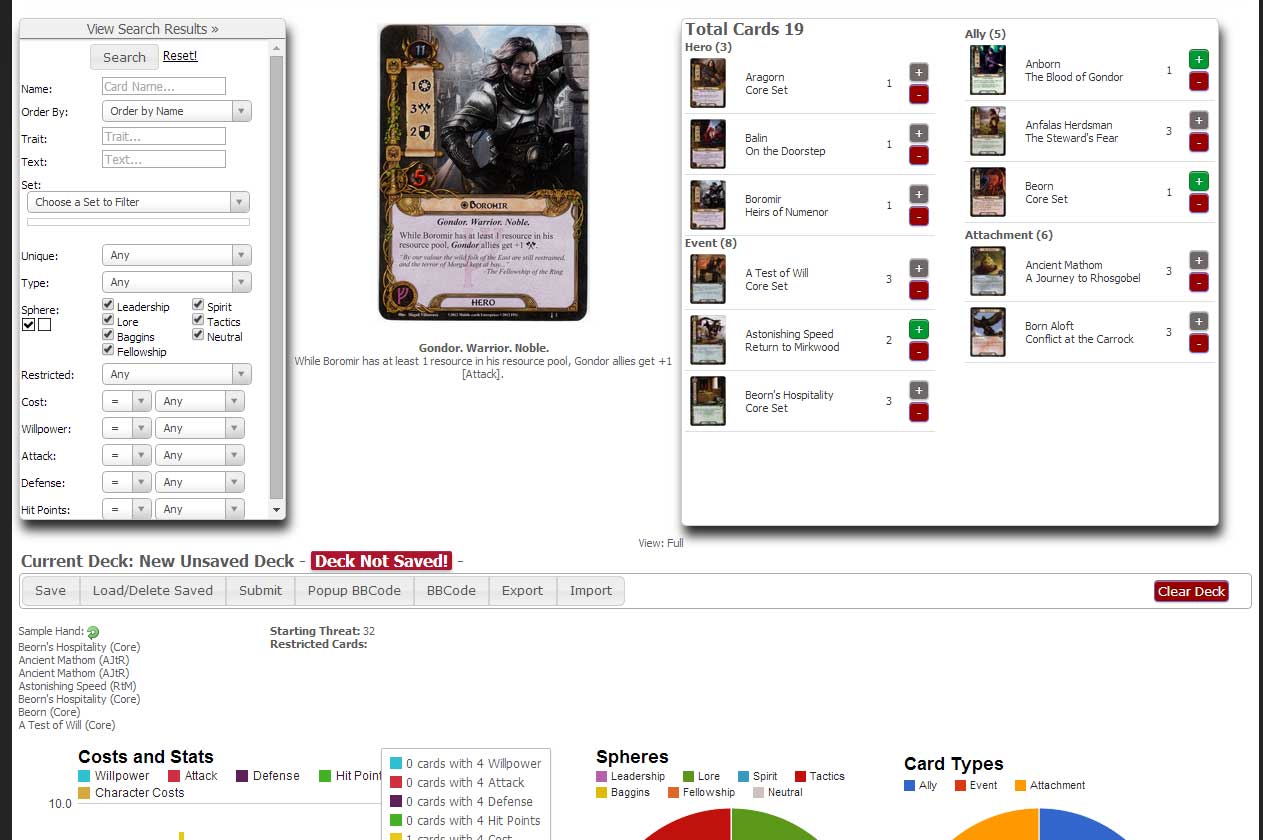 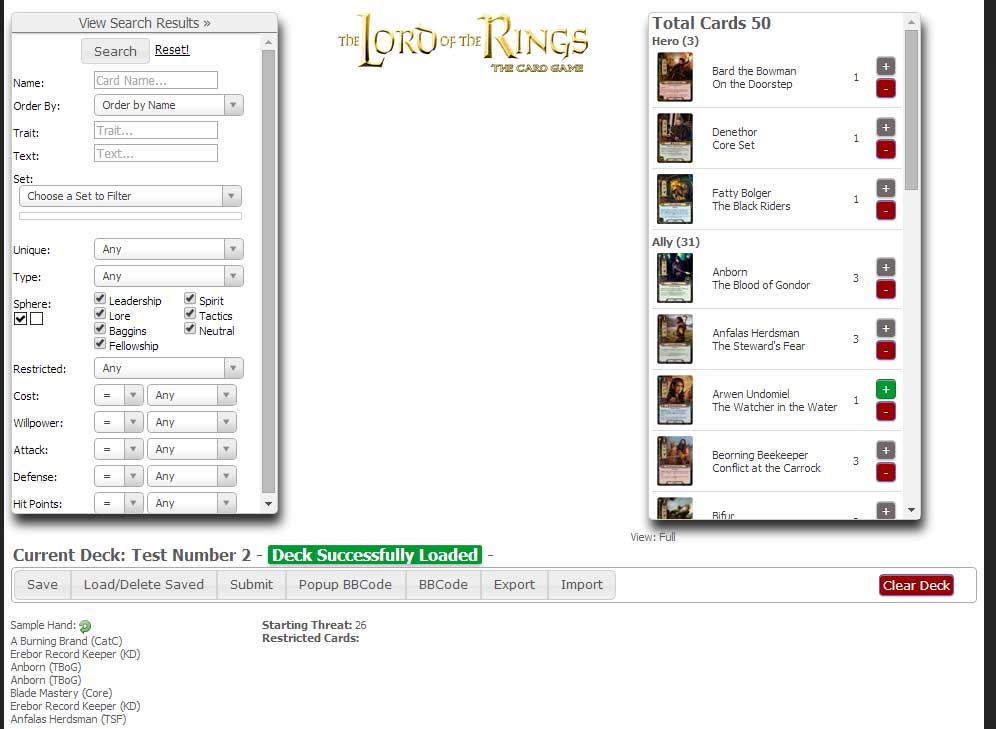 Next up there are 2 views for card records, if you want to see more on your screen switch from the full to compact view to remove the card icon images. You will also note that you can add 3 cards at once directly from the card search. (game of thrones image shown but Lord of the Rings is the same) 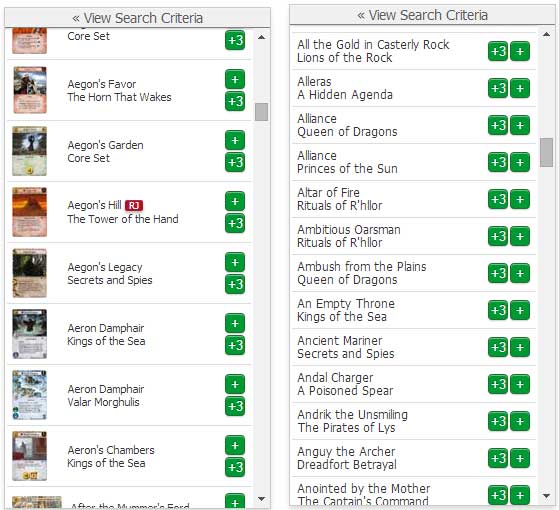 There are brand new non-flash graphs the same sample hand.

Perhaps one of the most confusing things about the old deckbuilder for new users was saving and submitting decks. I've tried to make this more intuitive by giving each action its own section. When you click on Save it will allow you to fill out the deck information, pick some pre defined tags and it gives you one of two options. Saving as a new deck will add it to your saved decks as a new entry, but if you have loaded an already saved deck the update existing deck button will be usable and will automatically update the deck. 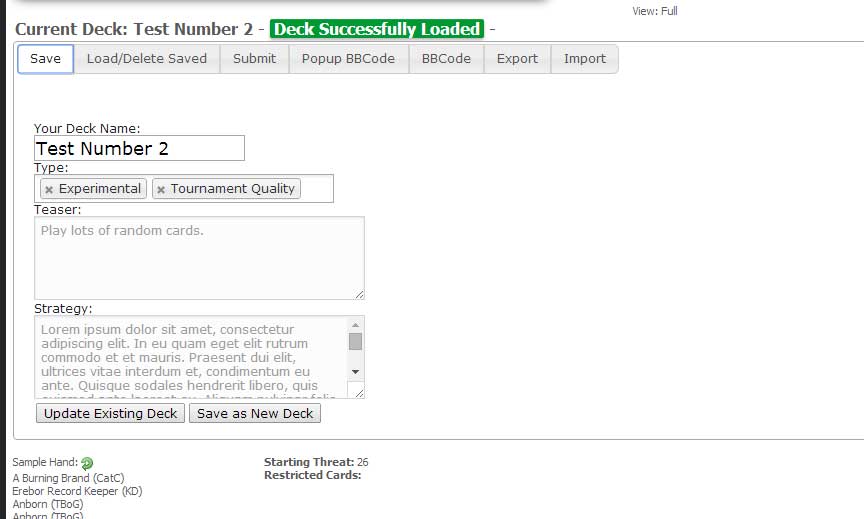 The load and delete saved section will show you your saved decks and let you get rid of them, load them or generate a private link you can share with a friend so they can see your deck without you having to submit it to the site.

The submit section lets you review any of your saved decks and send them to our submitted decks section. Deck approval is no longer necessary so whatever you submit will be immediately visible.

The new submitted decks section has filters so you can filter by a users chosen tags. Note that the deck version is automatically tracked so as long as you are submitting the same saved deck, every time you submit a new version of it the system will increase that counter and show it.

The submitted deck shows a sortable list of the cards in the deck, with export options and two different views

The new deckbuilder can be found here: http://www.cardgamed...ngs-deckbuilder

The new submitted decks can be found here: http://www.cardgamed...ubmitted-decks/

For those of you who play the other LCGs I'll be rolling out updated versions of all the deckbuilders over the next few days!

amazing stuff! No lackey export.. get back in the dungeon and do more work!!!

1) Will old decks that have been published be getting deleted? Not from the deck builder but from the forum for public viewing?

2) With the 50 deck limit, I can export it as a text file and import it later.. so basically have a dir on my drop box or something with a billion decks in it if i wanted. These I can load inot the deck builder to edit again at some point in the future?

2.2) To that end, if I publish a deck publicly using the new deck builder, do I need that deck itself saved as well, or can I delete it after publicly publishing it.

1) Will old decks that have been published be getting deleted? Not from the deck builder but from the forum for public viewing?

2) With the 50 deck limit, I can export it as a text file and import it later.. so basically have a dir on my drop box or something with a billion decks in it if i wanted. These I can load inot the deck builder to edit again at some point in the future?

2.2) To that end, if I publish a deck publicly using the new deck builder, do I need that deck itself saved as well, or can I delete it after publicly publishing it.

1) at the moment no. I"m going to put a link on the new deck section to the old one to view old decks. There won't be any new ones in that section though.

2.2) Once you publish it it creates a copy at that point and puts it in the decks section. The original deck in your private saved section can be modified or deleted and unless you submit that deck again the published deck will remain the same. The only hitch is that if you delete a deck you have submitted, then reimport it and submit it again it will create a new deck instead of updating the old one.

I didn't know about the new deckbuilders until just now, and when I looked, I discovered that the new LotR deckbuilder just went live! Awesome! I'm comverting all my old decks now.

By the way, a bug report. When importing my old Outlands deck, I noticed that the Costs and Stats bar graph was showing me "3 cards with 15 HP". A little experimentation proved that it was the Warrior of Lossarnach that was being incorrectly calculated as having 15 HP. While he can get pretty beefy when backed up by his fellow Warriors and a lot of Herdsmen, 15 HP seems a bit much. :-)

Apart from that small bug, it looks excellent so far! Thank you for a very useful tool.

Fixed Warrior, might have to ctrl+F5 to see the change.

In addition to F5, I also had to delete and re-create my Outlands deck: the incorrect HP stats had apparently been saved in the deck's saved data. So I exported it to a text file, deleted it, and re-imported it, and now the Costs and Stats bar is showing the correct HP values.

Another bug report: heroes' threat cost doesn't seem to be counted as "Cost" in the card filter. If I choose card type hero, only Lore sphere, and set the cost to be < 10, I still see Loragorn, Beravor, Elrond... The "Cost" filter is currently only looking at resource cost, so all heroes are counted as having a cost of 0. (Set cost to = 0 and I see all the hero cards show up.)

P.S. If you have a bug tracker on Github or somewhere, and you'd prefer bugs reported there rather than in this thread, let me know.

How long after clicking submit should it take a deck to post?

How long after clicking submit should it take a deck to post?

It should be instant, but make sure you are looking in the correct section. With the new deckbuilders the decks don't get copied into the forums anymore. Instead they are found here:

Ah so my deck did get posted!

Just curious, when can do you think Trouble in Tharbad will be posted to the deck builder?

Just curious, when can do you think Trouble in Tharbad will be posted to the deck builder?

And just FYI in case the http://www.cardgamed...e-three-trials/ thread somehow got missed, the two Lore cards from The Three Trials are still being mis-identified in the deckbuilder as being Leadership cards, so that still needs fixing too. (They're also being misidentified as Leadership on the spoilers page.)

The Trouble in Tharbad cards are showing up now -- thanks for that -- but they seem to be buggy: when I add them to an empty deck, they show up as having 0 copies rather than 1. (Same if I use the +3 button: 0 copies instead of 3). The + button next to the copies is grayed out and unclickable, but if I click the - button, the card disappears again and my empty deck now has "-1" cards in it. (And there's an error message in the pie chart saying "Negative values are invalid for a pie chart.")

Also, the two Lore cards from The Three Trials (Message from Elrond and Noiseless Movement) are still showing up as Leadership.

As I said before, if you'd prefer bug reports elsewhere, let me know where to submit them and I'll use that method rather than posting in this thread.

Hello. I am not sure, if i picked the right thread. I found out that Master of Lore (HoN) card has not been updated due to latest errata (picture and also text).

I was confused, because I made one deck by deckbuilder online and when i played with cards at home, suddenly this card seemed not so fantastic. So please, can you fix it

Is there a way to hide the boon and treasure cards from the card list in the deckbuilder? Ticking off 'fellowship' and 'hobbit' as resource spheres doesn't seem to do it.