Adept of the Waves 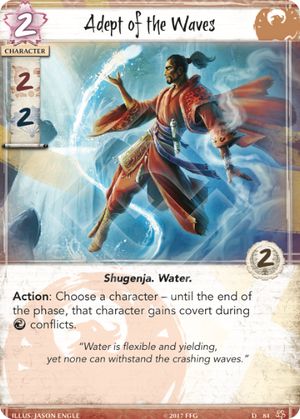 Adept of the Waves

Type: Character
Cost: 2
Military Skill: 2
Political Skill: 2
Glory: 2
Clan: Phoenix
Shugenja. Water.
Action: Choose a character – until the end of the phase, that character gains covert during [Water] conflicts.
“Water is flexible and yielding, yet none can withstand the crashing waves.”
Deck: Dynasty
Number: 84
Illustrator: Jason Engle
Want to build a deck using this card? Check out the Legend of the Five Rings Deck Builder!

Benjoewoo – 3/5
Like most of the Shugenja in core set, this guy is conditional. He is great if water ring is useful, but it often is not ideal to force it, making it more situational than the other similarly themed Shugenja.
Kingsley – 4/5
Two fate 2/2s tend to be a bit weak in my evaluation – I'd usually rather have a one fate 2/- or 2/0 – but Covert is so strong that it makes up for it, even if you do have to go in with water ring – which is something that you'll often want to do anyway if Tsukune is on the board.
Grendel – 5/5
Water ring is very dynamic in how strong it is, which I think leads to people missing how strong the ring is even when it’s not the “best” ring. I am sure by this point everyone has recognized how strong covert is. The body is decent, and the ability can get you there with free province breaks or even close the game.
I Fight Dragons – 5/5
This is an absolutely insane tempo 2-drop. Covert is probably the most powerful keyword in the game and the water ring is all about short term tempo. I like to covert a character with no fate then bow them with the water ring or use it after defending the first conflict to stand my best character again. The best part about this card is you can dodge assassination relatively easily because you can use his ability pre-conflict. Also, he’s a Shugenja.
nyxnyxnyx - 4/5
The water ring is kinda sucky, though the mechanic of fate going on unclaimed rings means that there will come a time for even Water to shine. 2 for 2/2/2 is kinda unexciting, though Covert is a pretty neat keyword. The way the ability is worded, you can put the ‘buff’ on a character in advance, and have it be ‘on’ during the Water conflict, in case you’re afraid of getting Assassinated or something. Having multiple of these Covert guys is great if you’re leading on provinces and are going on the final Stronghold push. Also a Shugenja for your Shugenjaing needs.

Oct 25 2017 02:36 AM
Good and versatile unit that can give covert to any remaining attacker you have. Solid in all decks, also shugenja its nice. If the enemy doesnt have 3 or more units can be pain in the ass and lets you claim a water ring that can be exchanged later with Know the world etc

This guy has become better with the new Keeper of Water role. Is a beast on late game.