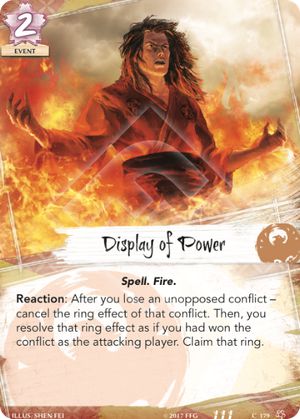 Type: Event
Cost: 2
Clan: Phoenix
Spell. Fire.
Reaction: After you lose an unopposed conflict – cancel the ring effect of that conflict. Then, you resolve that ring effect as if you had won the conflict as the attacking player. Claim that ring.
Influence: 3
Deck: Conflict
Number: 179
Illustrator: Shen Fei
Want to build a deck using this card? Check out the Legend of the Five Rings Deck Builder! Can anyone clarify how this card works? It's played as a reaction to losing (unopposed) - after Step 3.2.3 in RR, I assume. But does the player of the card immediately resolve the ring effect and claim it before proceeding to 3.2.4 (or other reactions)? Or is the "cancel the ring effect of that conflict" part of the effect a delayed effect, waiting until 3.2.6 for the cancellation to actually occur (along with the Display of Power's resolution of the ring effect)?

The most recent ruling we received from the devs says that you play Display of Power in step 3.2.3, it creates a delayed effect that resolves in step 3.2.6, when the normal ring effect would resolve, canceling it. Then the defender resolves the ring effect, and claims the ring.

Benjoewoo – 3/5
Arguably a trap card, but it can be very powerful. Risky though, at 2 fate cost and requiring you to lose a conflict unopposed, effectively also costing you an honor. Usually cards that require you to lose harder to use them are below average, but this card can turn games and ultimately claims a ring for you, so it’s at least average.
Kingsley – 4/5
Display of Power is bad to play under normal circumstances, but when it's on it's an incredible reversal. Just keep in mind that you have to spend two fate, a card, an honor, and often even a province (since you have to let them attack unopposed), and only use it when it Really Matters.
Grendel – 3/5
I don’t think playing this card just because you can is worthwhile, knowing when to play this card is the secret sauce, and when playing it at the correct time it can win you game.
I Fight Dragons – 5/5
What a card. For the cost of an unopposed honor loss and 2 fate, Display of power denies a ring effect from your opponent, gives the effect to you, gives you the ring, and also bows every character they attacked with. Especially good if your opponent is doing a poking attack or you manage to prevent a province break, which is totally doable. Display of Power is a card that’s not good in every conflict, but in a key conflict and ring claim can completely swing the turn and sometimes, by extension, the game. What makes this card so ridiculously good is that those types of conflicts happen every game and usually multiple times per game.
nyxnyxnyx - 5/5
The defining Phoenix spell. The effect is a huge swing, frequently netting twice of the ring effect (once when your opponent is denied, twice when you get it instead) on top of the Imperial Favor (because of the net 2-ring swing). Conveniently turns off some abilities that trigger off claiming rings while enabling them for you, such as Keeper/Seeker Initiate and Toturi/Hotaru. The only weakness is that it costs 2, making it a prime target for opposing event cancels.

City of Lies makes this card really nasty, easy to play and unexpected. Water Ring is situational (better in mid-conflicts); Air and Earth not really worth. But Fire and Void rings become huge swings in the board state with this card. I'm thinking about including the third copy in my Scorpion deck.

Oct 16 2017 02:29 AM
If you can’t break, you other winning prize is the chosen Ring. Denying it and being played against you is incredible. Very good control tool, lets you claim the ring also and that lets you grab Imperial Favour more easily.

Ive seen ppl play this without a shugenja in play ? Whats up with that ?

Ive seen ppl play this without a shugenja in play ? Whats up with that ?

You don't need any shugenja to play this card.

Really , but it's a spell ? Can you explain the rule for me that allows this ? Because if i play it like that, i will need to explain it to ppl.

Yes, you need to read this:

The bold text under the image are just traits. Traits can be referenced by other cards, but doesn't have rules per se.

Ok, i noticed this after a google search, but thank you for replying

Nothing worse than seeing a Phoenix player sitting on 2+ fate when you are trying to figure out what attack to launch. Display of Power has a huge impact on the flow of the game.

Nov 14 2017 09:02 AM
I've personally found that the benefits of Display of Power rarely justify the cost (2 fate plus 1 honour for unopposed... Plus the almost guaranteed loss of a Province). I prefer leveraging advantage through Way of the Phoenix and Know The World, however the fact that people seem so over-awed by Display of Power means its probably worth keeping in my decks for its psychological benefits at least.

It may be more worth it when you get an Imperial Favor based counterspell, of course...

Honestly though, I think that well-timed and well-played this is an amazing card. If you turn around a Void ring challenge, you've effectively prevented a fate loss from your character, taken a fate from an opposing character and stolen a Ring. So that's 2 fate from pool and a card from hand in order to create a boardstate change of +2 Rings and +2 fate in play. That is totally worth it.

Other rings, of course, will give other benefits, but you'll only play this card when the situational benefit is as big as that swing.

I have discovered after playing it in a number of games, that the most interesting rings to take over are void and fire, while water can be not worth it at all, or on the contrary a totally break (opponent does not ready a character, you ready your fatty for a second conflict).

It makes huge game swings, specially when champions are around. Wouldn't change my x2 copies in scorpion for any other card. And in Phoenix, with the Imperial cycle and the upcoming fight for the Imperial Favor, it will be brutal. Shame they are seekers, not keeper, because Display of Power can bring all your keepers back to the game.

Nov 14 2017 03:24 PM
Void can be a game-ending swing, if it saves your champ and wipes theirs. Fire is also huge. Air can win dishonour games, and against Phoenix your honour buffer needs to be bigger for this reason. Against another clan you can fix it by taking the air ring - here you lose either way. Water is niche, but can still be a big swing, especially if you have a bunch of Keepers ready to surge out.

If you also run Know the World you can hypothetically trigger the same ring 4 times. Though I don't actually think you want to go all in on this in practice

Fair points.  I agree that it will become more powerful once the new fight-for-the Imperial Favour cards come out.  But  depending on your opponent you have to run the Voice of Honour / Forged Edict gauntlet first in order to get there and claim the Favour so that Censure can be switched on....

I can see that using it to claim and trigger Void is a potentially powerful move and can really shift the balance, but - Water shenanigans aside - your pay-off doesn't come until the next round, whereas your broken Province this round could prove costly (because leaving a Province undefended means it probably needs only the slightest of nudges to break).  And Water, well.... it would be a brave opponent who declares the Water ring when attacking Phoenix between now and Winter Court 2018....

Still, I can't deny that using it to claim the Fire Ring is almost always absolutely worth it (and then some), and for that reason there will always be at least one copy in my Phoenix deck for the foreseeable future...