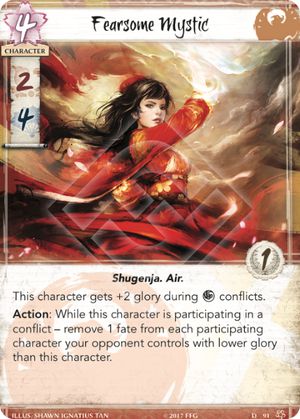 Type: Character
Cost: 4
Military Skill: 2
Political Skill: 4
Glory: 1
Clan: Phoenix
Shugenja. Air.
This character gets +2 glory during [Air] conflicts.
Action: While this character is participating in a conflict – remove 1 fate from each participating character your opponent controls with lower glory than this character.
Deck: Dynasty
Number: 91
Illustrator: Shawn Ignatius Tan
Want to build a deck using this card? Check out the Legend of the Five Rings Deck Builder!

Benjoewoo – 4/5
I think you’ll want to play her for a while, because fate control over multiple opposing characters is fairly strong. She can get up to 5 glory in air conflicts, which basically means she hits everyone except Tsukune or a serene warrior with the SH buff in the mirror match. Also not terribly inefficient and is a Shugenja.
Kingsley – 3/5
I like Fearsome Mystic, but I'm not sure how long she'll stay in the deck because her play, while strong, is extremely telegraphed. Strong with Elemental Fury or Kuroi Mori, but otherwise not thrilling.
Grendel – 3/5
4 is a nice number, the ability can cause an opponent to flatline. But not helping you this turn is a big downside in my book.
I Fight Dragons – 3/5
Fearsome Mystic offers Phoenix some great board control which is the name of their game, but can sometimes be awkward in order to pull it off. The Air Ring is far and away the least declared in my experience, so you often need to use your Stronghold to bring her up to threatening fate removal. The main reason for the 3 rating here is actually Isawa Kaede in the first pack fulfilling a very similar role but in a much more effective way.
nyxnyxnyx - 2/5
4 for 2/4 is passable. She gets +2 Glory during Air conflicts, which is intended as synergy for her Action, which strips fate from participating characters with lower glory than her. No one in their right mind will let you get any more than 1 Fate out of her ability. (2 is rare but possible, 3 is when you need to find better opponents) Requiring Air to get to 3 (5 with Stronghold) also means it’s possible to play around her. ’Lower” instead of ‘equal to or lower’ glory also means that even with Stronghold she barely misses 3-glory clan champs (that are more likely to have Fate on them) like Hotaru/Toturi/Yokuni who go on any non-air conflict. Hypothetically, if I get this to 5 Glory, would I be able to use the action repeatedly and strip all participating characters of all their glory?  Is there a rule that indicates an action can only be used once?

I do understand that if it is repeatable, you just wouldn't send big characters with lots of fate on them in the conflict, but knowing that, seems like this card is a good character to have on the defensive as it will prevent key characters from attacking.

Hypothetically, if I get this to 5 Glory, would I be able to use the action repeatedly and strip all participating characters of all their glory?  Is there a rule that indicates an action can only be used once?

I do understand that if it is repeatable, you just wouldn't send big characters with lots of fate on them in the conflict, but knowing that, seems like this card is a good character to have on the defensive as it will prevent key characters from attacking.

You can only do an action once per turn (if it isn't stated otherwise).

This card is underrated IMO. Is one of the few characters Phoenix have with a stat of 4, thats good in its own. Gives phoenix reliable board control, also good. In Air conflicts when honored she is a monster (even without trigger Isawa Mori Seido). And is a Shugenja (Against the Waves and Cloud the Mind say hello). Solid.

I can't decide if this card is any good.  I'm building a deck that's mostly based around Kaito Kosori and making every conflict Air (as much as possible).  Kudaka seems better than Fearsome Mystic in the 4 slot, and I'm having trouble finding room for this one, even when my whole deck is based around having 2 to 3 Air conflicts per turn...  Am I wrong, or is Fearsome Mystic just underpowered?

Well, This is a shugenja that you play pretty much only out of the original stronghold, Isawa Mori Seido. In those decks, she is very powerful. Getting her honored, boost her glory and attack in air makes for a 7/9 shugenja, that will void all defenders.

She is also modal, in the sense that if she becomes dishonored, you keep her out of air conflicts and have a respectable 1/3 body to work with.

She fits in any deck that is interested in controlling fate on characters, or as a response to character where many attachments are dumped upon. Her best friend is Favorable Ground so you can pull her in whichever conflict your mark is in. You want to play her with characters that raise the stakes of a challenge, like Asako Diplomat. Finally, she is one of 5 characters in phoenix that can escort the Haughty magistrate after you apply the glory bonus.

So in summary: She is potent, but not quite in a deck that only wants to go air, because high glory certainly has its drawbacks. If you plan to go air all the time, Kudaka's bonus might be better, especially if you are playing this out of Kyuden Isawa.

I was going back and forth on which box, since honoring Kosori and increasing her glory is also good.  But I think I settled on Kyuden Isawa.  Which yeah, probably means Fearsome Mystic is inferior to the other 4's and 5's available.  It's just a little bit sad that she's not even that good if the conflict is usually Air.  My big problem with her is that you never get 2 Fate off of enemy characters.  You're lucky to get 1 sometimes.