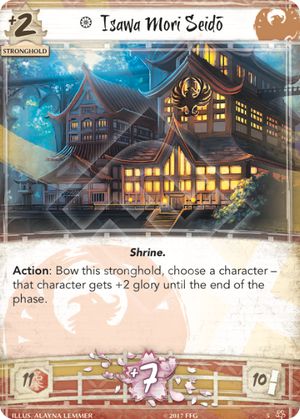 Benjoewoo – 1/5
Barring the next Phoenix SH is blank with the same stats, virtually anything will replace this. Requires other cards to make ability relevant outside of contesting the favor, but even then requires a standing character who unbowed or didn’t attack/defend.
Kingsley – 2/5
Despite being in contention for the worst stronghold in the game right now, Isawa Mori Seido has a fair number of uses – the problem is that all of them require other stuff to set up. Versatility is one thing, but Phoenix doesn't have enough honor/dishonor tech for this to be strong. On the other hand, I guess it makes up for the ridiculous Kuroi Mori?
Grendel – 3/5
The ability in and of itself is quite strong, but the lack of ways to manipulate a character’s status leaves this stronghold lacking. This could conceivably change with the introduction of one or two cards.
I Fight Dragons – 3/5
Isawa Mori Seido has a hard time shining in the core set. There are plenty of ways to honor characters, but many require winning a conflict while dishonoring your characters requires very little investment with cards like For Shame! and Way of the Scorpion. That said, this stronghold is very flexible. In addition to buffing up an honored guy you control, you can also use it to decrease the stats on a dishonored guy of your opponent, grab the imperial favor, or for some card synergies within Phoenix.
nyxnyxnyx - 3/5
11 honor, +2 province strength pretty decent. The ability is super flexible, being usable on attack, defence, in both POL and MIL, and doesn’t require a large commitment the way Crab’s or Lion’s does. The catch is that the 2 skill swing is only ‘on’ when your side has an honored character, or the other side has a dishonored one which is easier said than done given Phoenix’s lack of in-faction honor/dishonoring options. The swing is also undone by any subsequent honor/dishonoring, so it’s not always the most straightforward boost. The glory boost affects certain glory-matters cards, so that’s neat. You can also use this to claim the Imperial Favor most of the time, if there’s no better use for it.