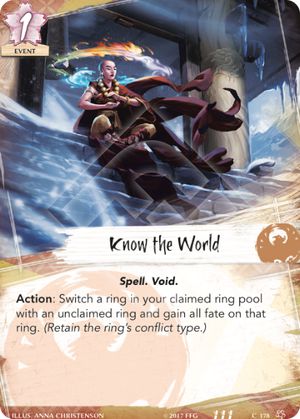 Benjoewoo – 3/5
The card is fairly situational, and requires other cards to maximize its use because it often will not gain you much benefit by itself. Can lead to powerful combos, and is part of the Phx deck that says you never play the game, assuming it comes to be.
Kingsley – 2/5
Combo card that isn't good yet except under rare circumstances. Hopefully it will never be good, because combo stuff like this can often have negative impacts on a game.
Grendel – 2/5
Seems like a dragon monk card in the making.
I Fight Dragons – 2/5
Know the World is a fun card and gives a lot of flexibility to the turn. You can use this to deny fate on a ring, as extra economy, to change your claimed ring to Earth for Solemn Scholar, or to simply double claim a specific ring. Unfortunately, Phoenix can sometimes struggle with reach right now, so you have limited options for cards that don’t help you actually win conflicts to begin with. I like this card, and I hope in the future there are tons of reasons to run it.
nyxnyxnyx - 2/5
Costing one is quite an issue, though it can potentially net fate when choosing a ring with fate on it. Just doesn’t quite pull its weight for costing 1, compared to the plethora of options available at that cost like AtW and such.

This card is amazingly good. One of the multiple tricks that Phoenix have to activate same ring twice in a round. Can also be used to activate Solemn Scholar,  Masahiro, Atsuko etc

Agree with you. In any other Clan it'd be mediocre, but Phoenix runs off stuff like this. Failing all else, it's often a way to trade a card for a fate bonus, or at least to deny an opponent fate from conflict declarations. At best though, it drives a very large number of combos very flexibly. Nov 17 2017 05:15 PM
I like this card a lot, but I must admit that its use isnt something great at the moment. Pay 1 fate to take 1 or 2 (most of the times 1 for 1) is below average. The effect helps you use some abilities or use the same ring twice in a round but you dont play alone the game............ I believe that only with way of the phoenix this card would have some use. On the other hand there is no space in the decks for adding both these cards (ktw & wotp).... 2 way of the phoenix only for denying a ring is preffered (be thematic after all)....