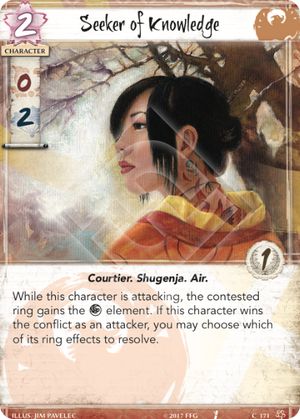 Type: Character
Cost: 2
Military Skill: 0
Political Skill: 2
Glory: 1
Clan: Phoenix
Courtier. Shugenja. Air.
While this character is attacking, the contested ring gains the [Air] element. If this character wins the conflict as an attacker, you may choose which of its ring effects to resolve.
Influence: 1
Deck: Conflict
Number: 171
Illustrator: Jim Pavelec
Want to build a deck using this card? Check out the Legend of the Five Rings Deck Builder!

Benjoewoo – 3/5
She is somewhat limited by the fact her cost to stats ratios aren’t great. But, if Phx are able to consistently deny multiple rings with their Way card, then she’ll easily rise in ranks.
Kingsley – 3/5
This isn't very good right now but we've already seen future cards that will make this very cool, and it does provide an interesting option for honor and dishonor. Being both Courtier and Shugenja is pretty hype as well.
Grendel – 3/5
Phoenix has a very grindy style right now and this character can help give you the reach you need on honor for more cards or the ability to threaten dishonor on your opponent.
I Fight Dragons – 2/5
I don’t like this card. It was very mediocre stats for a 2 cost character and an ability that adds the least impactful ring element to a conflict and only while attacking. The ruling on Way of the Phoenix with multiple ring types gives it a bump, but I don’t think that deck will be that good even with Kaede also adding void to a ring.
nyxnyxnyx - 2/5
Ahh, the source of a million rules debates. Out of the core set, there are few combos beyond cute ones with Way of the Phoenix (locks out multiple elements). There is Isawa Kaede in the first dynasty pack, but this is a core set review so…
She’s a Courtier Air Shugenja, which is a pretty exotic trait combo shared with exactly with one other character, Asahina Storyteller. Stats are wholly unexciting/bad. Air ring is pretty crappy, so gaining the option for Air is pretty meh.

While the stats aren't particularly impressive, let's keep in mind that he is easily splashable and can played from hand.

When going second, wait for the entire enemy force to be tapped out, spend 2 to sneak in a surprise attack, preferably unopposed, and nab 2 honor from the opponent.

That might force them to have a hard thought about their next turn's honor bid and all the more reason to think hard whenever Flaming Chicken has two fate to spend.

Or not just Flaming Chicken, Tick and Scorpion can easily pull that trick too.

In my view, this guy is very important for all sorts of honor strategies if anyone cares to explore them.

Being able to trigger ring of air twice (up to three times if you're into Johnny combos, there are at least two ways to pull it off in-faction) can be quite a swing.

Air ring when you want! yay, this girl is pretty amazing.

Nov 10 2017 12:28 AM
What happens if I claim a non-air ring with her? Does it revert to its original non-air type after the conflict and its effect is resolved? If yes and I am Seeker of Air and having a Seeker Initiate in play, his effect won't go off. Right?