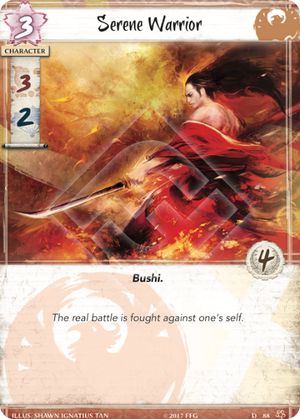 Benjoewoo – 2/5
Very swingy card, and while he can be the monster that can’t be dealt with while honored, but while dishonored useless and while normal is lackluster.
Kingsley – 2/5
This card would be decent in Crane, but in Phoenix you don't have a reliable enough way to get your guys honored. I would not play this card unless honoring your guys becomes significantly easier in the future or your opponents really like letting you claim the fire ring for some reason.
Grendel – 2/5
It’s quite possible for this character’s value to increase greatly if more honor effects come along for Phoenix. Currently he is very weak but sometimes he gets honored and your opponent can’t answer him.
I Fight Dragons – 2/5
Serene Warrior is an average stat 3 drop that has extra glory in place of an ability. Referring back to my comments on Isawa Mori Seido, it seems way easier to dishonor characters than it is to honor them currently. As such, the high Glory on Serene Warrior can often be a detriment, with no ability to redeem the loss of stats. Could potentially be a great card later in life, but not super great in the core set environment.
nyxnyxnyx - 2/5
3 for 3/2 is okayish. 4 Glory is o_o . I hate that Glory is a double-edged sword, but once again, I will reiterate that when your Glory is higher than your base stats, it’s actually a good thing, since you can’t go below 0 skill for the purposes of comparing skill for conflicts. If he’s dishonored, your net loss is -3/-2, whereas if you honor him, your net gain is +4/+4 (from a neutral state). Still overall a pretty crappy card but it’s something.

Oct 25 2017 02:41 AM
The best warrior Phoenix clan have, he grabs lots of attention and must be answered. Synergy with Radiant Orator. Dont send him in politics due to Court Games. When honored 9 military with the stronghold is nice in a political faction.