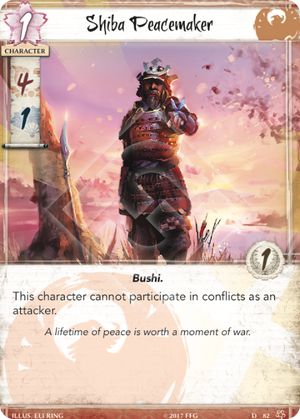 Type: Character
Cost: 1
Military Skill: 4
Political Skill: 1
Glory: 1
Clan: Phoenix
Bushi.
This character cannot participate in conflicts as an attacker.
A lifetime of peace is worth a moment of war.
Deck: Dynasty
Number: 82
Illustrator: Eli Ring
Want to build a deck using this card? Check out the Legend of the Five Rings Deck Builder!

Benjoewoo – 4/5
This guy is hyper efficient to get some cheap military force. Will be included for a while until a 1 or 2 drop comes out with a non-drawback text box and 3 or more military force.
Kingsley – 4/5
While this character is only really strong in one challenge each turn (defending military), he's amazingly strong there for his cost, and it's a role that Phoenix can really use.
Grendel – 3/5
Against Crab, Dragon or Lion this card is a straight wall and his value is amazing. Against the other clans he is extremely lacking. Thankfully for him two of those clans are top dog in the meta.
I Fight Dragons – 3/5
Some people won’t agree with this rating. To me Shiba Peacemaker is a monster in 1 out of 4 potential conflicts each turn (military defense) and basically useless for the other 3. This inflexibility is a fair price for his good military stats, but doesn’t make him amazing.
nyxnyxnyx - 5/5
This guy is great IMO. 1 for 4 is huge, and all that you have to do is put him on defense in a MIL conflict. He is rather weak to harpoon effects, however, and the likes of Doji Challenger and Yogo Hiroue love nothing more than pulling him in on POL defense duty. It’s not an argument against Peacemaker, but rather a testament to its strength that it has to be dealt with.