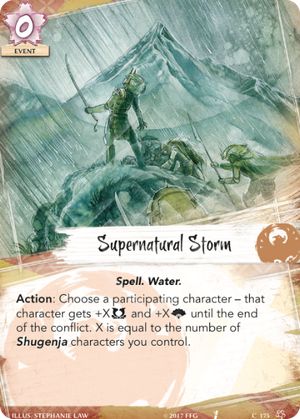 Type: Event
Cost: 0
Clan: Phoenix
Spell. Water.
Action: Choose a participating character – that character gets +X[Military] and +X[Politics] until the end of the conflict. X is equal to the number of Shugenja characters you control.
Influence: 1
Deck: Conflict
Number: 175
Illustrator: Stephanie Law
Want to build a deck using this card? Check out the Legend of the Five Rings Deck Builder!

Benjoewoo – 5/5
Barring Phx get a top tier deck with non-Shugenja only, this card will likely be auto-include for a very long time in every Phx deck because it’s an uncapped multiplicative bonus that only has a trait restriction, a trait that you want to maximize board population on anyway.
Kingsley – 5/5
This card is already great and it is only going to get better. While the average stat boost right now isn't great (it'll often be two strength or so), the fact that it works in both conflicts is rare and prized.
Grendel – 5/5
Currently quite strong, will only get stronger and scarier as time goes along.
I Fight Dragons – 5/5
This card is insane. Absolutely insane. This is another card I feel a lot of people glance over without much consideration, but it’s a non-limited skill buff that works in both conflicts and scales with characters you want to run anyways. Even at a lowly +2/+2 this card is great and flexible for threatening conflict wins, and +3/+3 and higher it gets to ridiculous levels. The best part is that this card only gets better as the card pool expands and more Shugenja are released. One day this card will be a real pain to deal with against Phoenix, and it is already good.
nyxnyxnyx - 3/5
Usually going to be around 2+ skill, which is pretty decent for 0 cost. Does require heavy investment in the Shugenja theme, however, so it’s not going in every deck.