41 replies to this topic

Summary: This competition has now closed. Thanks to everyone who entered, and congrats to the winners!

"That is not dead which can eternal lie, and with strange aeons even death may die
In his house at R'lyeh dead Cthulhu waits dreaming, til a "fish fingers and custard" nightmare causes steaming
From churning abyss shall Cthulhu arise, on a photobomb rampage to then terrorise
Until creature is met yet more ghastly than he, as, from Lady Ga Ga, great Cthulhu doth flee"
-- HMAS Lovecraft

It's a fantastic time for players of Call of Cthulhu: The Card Game. At Fantasy Flight Games' recent LCG State of the Union address, it's been confirmed that: i) Call of Cthulhu sales are increasing; ii) FFG are committed to the game's future with announcements for the next two deluxe expansions For the Greater Good (featuring The Agency faction) and The Thousand Young (featuring the Shub-Niggurath faction), and the recent release of Necronomicon packs for a new draft format of play; iii) reprints are definitely coming for the out-of-print asylum pack cycles; and iv) all previous packs and expansions will remain valid, with no rotation policy required for this game. Not to mention that this year we saw a ~50% increase on the number of participants in the Call of Cthulhu World Championships that were just held.

Let's celebrate the great news for this amazing game by spreading the word and doing it in style - Cthulhu photobomb style - with a competition!

The challenge:
1) Take a photo, or digitally enhance one, that includes a surprise Cthulhu (e.g. a picture with the unexpected inclusion of a Cthulhu plush toy, the Call of Cthulhu game box, a Cthulhu card, a Cthulhu domain marker statuette, or anything else Cthulhu-ish you can think of).
2) Post a copy of the picture to your preferred social media platform (e.g. as a status update on Facebook or in your Twitter feed), which will hopefully spark a Call of Cthulhu conversation that could just lead to new players for you!
3) Post a copy of the picture here, too. (Just upload it to a free image host site like AnonImg, then reference the direct link here.)

The rules:
* Entry is open to all current and new CardGameDB members anywhere in the world
* You can submit as many images as you like, but must include them all in a single post (i.e. edit the same post to add more), as voting/winners will be selected per entrant (and not per image submitted)
* All pictures must comply with CardGameDB content guidelines (e.g. no human nudity)
* All pictures must be unique (i.e. you cannot repost another entrant's image as your own)
* If you make use of copywrite images without permission then you do so at your own risk
* Entries close at the end of the month, November 2014
* There will be three winners, noting that each entrant can win only one prize, determined as follows: 1st prize winner decided by community vote; 2nd prize winner by community vote runner up; 3rd prize winner by random selection
* Between 1st to 7th December, current CardGameDB members only (i.e. only those registered prior to 11th November 2014) can each comment to cast just one set of votes - nominating both their favourite and second favourite entries - for entrants other than themselves
* Votes will be counted as 2 points for a '1st fave' vote, and 1 point for a '2nd fave' vote, with the top two voting points determining first and second placed entrants respectively; plus the third placed winner will then be selected at random
* Any entrants who do not complete the challenge or abide by the literal rules and spirit of the rules will be ineligible/disqualified
* Any votes cast by ineligible members, or by members casting more than one vote, will be excluded

The prizes:
* Each winner, in order of 1st then 2nd then 3rd, can select one of the remaining following four prizes:
A) In The Dread of Night new & sealed 40-card Dreamlands asylum pack (featuring Dreamlands Fanatic and more)
B) Sleep of the Dead new & sealed 40-card Dreamlands asylum pack (featuring Behind Bars and more)
C) 2012 Australian National Championship branded double-sided 3-card domain set (featuring Dark Young on one side and Cthulhu on the other, to match your 2014 Winter Champion and 2013 Season 2 Champion playmats respectively)
D) 2013 Regionals double-sided 3-card domain set (featuring Tzu San Niang on one side, and The Red-Gloved Man, Amaranth, and The Sanguine Watcher on the other)
* Standard shipping to your location is included in the prize (though if you want to insure or expedite delivery of the item that would be at your expense)
* No responsibility can be taken if the item is lost or damaged in transit, though it will certainly be packaged with care

The FAQs:
Q1. Umm... Why?
A1. T'was Halloween night 2012 when I was first introduced to Call of Cthulhu. Today, over two years later it continues to be my absolute favourite game (and I play a lot of card and board games). However, like many of you, I do lament the fact that so few people have discovered this treasure. It's my hope that this little bit of fun will provide an opportunity to have people asking YOU about Cthulhu, which just might lead to more people trying and then playing the game.

Q2. How will you verify that people have completed step 2) and posted their Cthulhu photobomb to a social media site/service?
A2. You're trustworthy, right? And wouldn't you like to have more people to play Call of Cthulhu with? Enough said.

Here's an example one, but I'm sure y'all can produce one that's funnier, wittier, weirder, wilder or sneakier...
Looking forward to seeing yours!

credit to Sans Détour for the Cthulhu graphic, which was used without permission

cool~ I'm in! will update with a picture link

Good on you for being the first to dive in, skureppe. That picture is toiletly unbelievable.

I post it on wechat. hopefully some of my friends will recognize Cthulhu~

Even better if they don't know him. Then they just might ask: "Who/What is that?" and start a conversation...

yep, there were two conversations by far(and some "liked"). One was started with "what is it?" the other friend told me Cthulhu might need more toilet papers......

My wife makes and sells these on her Etsy store. They've become so popular that she's rebranding the entire store as "Squid Pro Quo" and going to start focusing more on such things at the beginning of the year. I'm currently  in the process of building her a new website to go along with it and link into Etsy. We took this picture a while back for giggles. The "Tentacular Spectacular" promo cards seemed more than appropriate! I doubt the customer who ordered each of these squid would have expected them to play a quick round of Call of Cthulhu before being shipped out. One even ended up in the Scottish Association for Marine Science's "Ocean Explorer Centre". Talk about photobombing!

Of course, what else would squids play, but Call of Cthulhu.

Don't forget to share your pic on your usual social media channel, too - hopefully someone will ask: "What is that game they're playing?", and then you can tell them!

I put them up on Google+. They're drumming up some questions from people at least already familiar with the Cthulhu name.

I'm not in this, so it's not an entry into the contest, but figured you guys may get a kick out of what I did this morning at work.

Facebook is NOT required to see the video above. I've been away from the game for awhile, but I hear that Black Dog is a good card.  Sadly, I had trouble fitting it in the binder.

Looks like you just played Binding on that Black Dog - he's clearly lost all his Combat icons.

Less than two weeks to go to submit your Cthulhu photobomb pic, for a chance at some pretty cool prizes!

There's less than one week left to post up your Cthulhu photobomb pic.

While first and second prizes will be awarded to the community's fave pics, the third prize will be awarded via random selection. So if you don't think you can come up with the best one, don't let that stop you because everyone has a chance to win! And with just a handful of entrants so far, the odds are very good indeed.

Final days! Get a pic with Cthulhu in if you want to win!!

The stars are right so here is my contribution, I hope you like black/white.

His Unholiness says: You're in the running, Yuggoth! 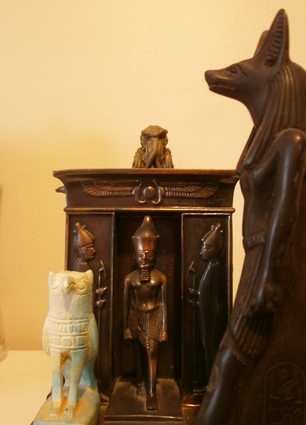 In this composition, entitled "Elder God photobombs junior gods," I imagine the Lord of Dreams as the bad fairy at the christening of the Child Horus, who must consequently sleep for an aeon before coming into his kingdom.