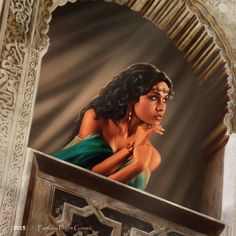 A Game of Thrones 2nd Edition Speculation: House Martell
In this article I'm going to a examine where House Martell was in 1.0 and where it could be going in 2.0. FFG announced that their preview article of Martell goes up next week, so I'm rushing out an article of what I would like to see. I am going to apologize on behalf of all the Small Council members -- we had good intentions but FFG beat us to some of the factions. An upcoming series of articles will analyze each faction after we know the entire Core Set cardpool. Now on to the article!

[Spoilers through A Dance with Dragons]
“I am not blind, nor deaf. I know you all believe me weak, frightened, feeble. Your father knew me better. Oberyn was the viper. Deadly, dangerous, unpredictable. No man dared tread on him. I was the grass. Pleasant, complaisant, sweet-smelling, swaying with every breeze. Who fears to walk upon the grass? But it is the grass that hides the viper from his enemies and shelters him until he strikes.”

What we know? – We know Martell’s color is a goldish orange. We have a few spoiled cards: an amazing Arianne Martell that looks to be a staple for a long time and will be a strong reason to consider Martell as your support faction. A Doran Martell that pumps Martell lords and ladies more and more the longer the game goes (unfortunately not himself) but also with Insight adding some card draw to the faction. A very powerful non-unique three cost character Dornish Paramour that can force defenders and by such kneel a character down, everyone knows how powerful that ability is on Margaery and now got it on a fair price non-unique character, only works on characters that has intrigue icons though. A weapon, Dawn that like Doran adds strength to a character the longer the game goes. A strong event that can shut down a challenge from being initiated for a phase. Also, getting a version of The Red Viper that although isn’t fully spoiled yet does have what appears to be a strong power grab ability. can see all these cards here https://www.boardgam...on-lcg-spoilers 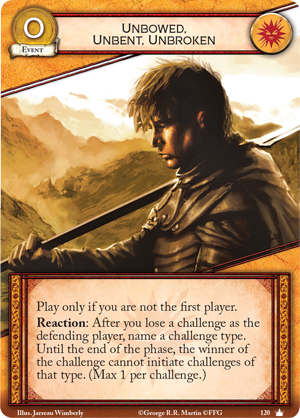 House Martell in the Novels – Martell is the only house to not bend the kneel after the conquest of Aegon Targaryen (hence their House words Unbowed, Unbent, Unbroken). They are the only kingdom in Westeros that still uses terms Prince and Princess that don’t sit on the throne. Martell was one of only two Kingdoms that support the Targaryen’s during Robert’s Rebellion. After the sacking of King’s Landing and the Murder of Elia Martell and her children, Martell has been in constant plotting of striking for revenge and these matters only got worse after the death of The Red Viper. It still remains unclear the long plan for the house of Martell. They have had a failed attempt of getting support of Danny by sending Quentyn and it is still uncertain what is Doran’s next plan is. Martell is a very intriguing house because Doran Martell seems to be always one step ahead of everyone, although slightly behind, however the Turtle always wins the race.

House Martell in First Edition. - Martell was the first house I really played. Red Vengeance was my favorite card right away. After playing the game for only two months my first ever tournament was at Worlds 2012 playing Martell Kothh, because I was so attached to all the powerful events the house had. I ended up going 3-3 which I was really happy about for only playing the game for such a short time and I remained attach to Martell through the years of playing.

Martell is the real control house. Has challenge denial, icon removal, bounce effects, standing/other triggers from losing challenges, card advantage, and other small factors that contribute to their control style. They also have good power gaining cards. Lot of playable characters with renown, To the Spears which can gain you more power than any other plot in the game, and we all know what The Red Viper can do. Martell also had the Sand Snake sub-theme. First attempt at them was based around giving all of them added icons and effects for getting them all on to the table. The Second attempt is more around them entering and leaving play triggering effects.

Martell has had a lot of success in first edition and is one of the most hated houses due to having some of the most powerful cards along with some NPE effects. Martell has had success with many agendas including; Brotherhood without Banners, Wildlings, Summer, Maesters Chain, Knights of the Hollow Hill, The Long Voyage, Bloodthirst, and No Agenda. As long as I have been playing the game Martell has always been a strong house.


House Martell expectation in Second Edition - “Unbowed, Unbent, Unbroken”
The faction I believe is going to be centered on a few key aspects. 1) I really hope they are still the control faction. It is fitting with them wanting to play the long game and if they aren’t the control faction who is? And I think for any card game to have a strong meta control does need to be an aspect in the game. Going alone with control includes icon manipulation I always found that a fun and useful but also interesting mechanic. 2) They seem to be based on plots in used pile. This is a really interesting mechanic and it points to a few things. Martell isn’t going to be a rush faction, at least not early in the game because has effects that wants plots in used pile, aka longer game. Also, I think this points to we won’t have plot manipulation like in first edition. If there is ways to constantly cycle your plot deck these effects can easily become over powered especially if is a core mechanic to the faction meaning more cards based around this concept. 3) I would really like the faction to have manipulation over reserve value. We have Lannister focus on Gold, Greyjoy focused on Initiative, Stark probably some focus on claim we should have someone focusing on this new concept of reserve value. Martell is in the desert which makes it the perfect setting for control over reserve. Desert should choke out the reserves of your opponent while you being used to those conditions allowing you to maintain stronger reserves. Also, if Martell does end up becoming a control faction will want them to have access to larger hand size than the agro/rush decks.

Personal Comment about Martell
It doesn’t seem to be this way since they have already spoiled Doran in the tutorial video, but I really want 2.0 to be more about Doran than Oberyn. I never understood why Martell based their decks around a character that dies fairly quickly into the series and with no true impact on “the game” while Doran has been constantly scheming. “You mistake patience for forbearance. I have worked at the downfall of Tywin Lannister since the day they told me of Elia and her children.” This is a character truly playing the game at all times and I really hope he is a constant impact player in the game. Or get a version that is a strong key to victory character in the game.

Although I considered Greyjoy my main house for many years in 1E (it was with a GJ TLV deck that I won the 2013 Atlanta Regional), I gravitated toward Martell, and specifically No Agenda/Quentyn, in the last few years. I love control style factions, and I really appreciated the win-by-losing theme that was such a major part of 1E Martell. Martell and Greyjoy are the two 2E factions I'm most excited to try out again, although I'm also definitely looking forward to giving Tyrell a swing.

I was just thinking in the shower, how I'd love to see an effect like Bungled orders as an event; That after losing a challenge, you could reveal a new plot card. I think at the very least I'd make it say "Do not trigger the "when revealed" effect of this plot, if any."

I just want to see a plot cycle effect in Martell to harmonize with the house effect, bot not one so tremendously broken that it would make people sad and angry. (I'd also make it loyal, just to limit the damage)

I am very curious to see what their house specific plot will do in the first cycle.