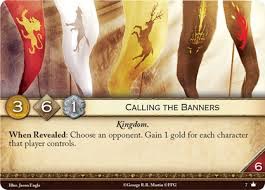 Welcome to the next installment of Calling the Banners, a series of articles dedicated to helping new Agot 2.0 players, written by the new players at Pawn Games, a game startup. We apologize for the delay in bringing this to you, but there were some technical difficulties. In our last episode, we went through the Exploiting Weakness deck that was created by FFG and whether it accurately showed the present and the future states of House Baratheon. Today however, we will be taking a couple steps back and talk about the factions as a whole in a series of New Player Overviews. Today we will be looking at 4 factions, and in little while we will look at the last 4. For every faction, we will: Assign a rating on how easy it is play and build decks for, where 5 is average, ten is easy, and one is difficult. We will also talk about the different archetypes that lie within each faction, list some plots that work well with it, list the faction’s preferred agendas, the challenge that the House focuses on the most, and a spotlight on a few cards within a brief summary on the faction. A note on the simplicity rating, it is not meant to say that there is no depth in a faction with high simplicity (ahem Stark), it is just saying that new players will find the faction easier. Readers, please comment on anything we miss. So without further ado, here is House Stark.


House StarkFaction Summary: Stark definitely tries to focus on taking as little damage as possible. Claim raising cards like “Winter is Coming”, and military cards like For the North! and Grey Wind are common when playing this faction. But the few characters that survive can cause many problems, so that is where Eddard Stark comes in. He can ready every time challenges are initiated against you, helping for both defense and dominance. Robb Stark can ready all of your characters for a big assault on your opponent if they manage to get the first player marker and kill one of your characters. As long as you have a Little Bird on Eddard and Robb if they enter play, you will be able to avoid Tears of Lys, the bane of Stark’s existence. That is, if you aren’t running Bran and his event cancellation. See where this is going?

House LannisterFaction Overview: Lannister, at heart, is devious. They have many ways to make the intrigue challenges worse than normal. Lannisport and Tyrion can provide cards with enough intrigue, and Cersei and Casterly Rock can allow you to wreak havoc on an opponent’s hand. Tywin can make use of any excess gold you have to dominate the board, second only to Bob as far as the effect on everyone’s strategies. Overall, Lannister is fairly well-rounded in terms of being able to defend most challenges through the use of cards like Gold Cloaks and The Tickler. The difficulty is trying to win power or military on defense.

The Night's WatchFaction Overview: The Night’s Watch focuses on defense, let us first say that. Through cards like The Wall, we get an idea that they don’t like giving up unopposed challenges. That is where Old Bear comes in. While The Wall is in play, Old Bear doesn’t kneel to defend. So if a Little Bird and the renown-granting Longclaw is in play, he is unstoppable. They also have several “leave play” abilities within the faction, furthering their defensive prowess. This is definitely a “play it safe” faction that relies on shutting down opponents and then using The Wall to get the power and win.

House BaratheonFaction Overview: Baratheon doesn't contain many flashy effects. Instead, they are more of a "play it safe" faction, with preventive cards such as Seen in Flames and Maester Cressen. They prefer a steady stream of power from cards like Chamber of the Painted Table and renown effects. They heavily revolve around kneeling, and their play style is best summed up by the word, stalling. Through Vanguard Lancer and the Red Keep, Baratheon tries to stall in order to get their effects into play, steadily gaining power all the time.


That's it for today. Sound off below, and we will see you in a week with Martell, Tyrell, Greyjoy, and Targaryen!

I'd suggest you use some formatting in the article to break up the different sections. As it is right now, it's pretty  hard to read.

Had trouble with the links and photos this time, sorry.

I added some rudimentary formatting/re-spacing to aid legibility. If you're having trouble editing your document, contact Pipes (one of the administrators) via Private Message on these boards for the appropriate permissions.

In the meantime, if you dislike the changes I made, let me know, I can reverse them!

How did you get the bullet points?

How did you get the bullet points?

The default editing tools when posting an article include bullet points, in between superscript and numbered points. If you don't see these options, you might have collapsed the toolbar - check the tiny little arrow above the scrollbar on the right of the article. It should be facing up, not sideways.

Thanks for the help! I am still learning the system. How come you can't copy and paste pictures into the body of the article?

The "Calling the Banners" plot picture does not show the FFG overlay. Better not tell the FFG police about it!

Sep 04 2015 11:59 AM
I noticed the beanstalk is your avatar image. You and your corporate beliefs! I can use the image if I want. :-)
On OCTGN, the image and the textbook show up, sans overlay so haha. :-) And we all know that Weyland is the worst corp.