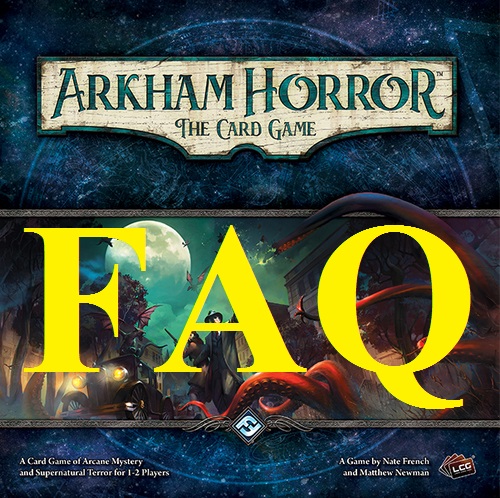 - You can only 'discover' a clue if there is a clue on your location.

- If there are no clues on your location, you cannot use the Reaction ability on Cover Up.

- Once you discard all clues from Cover Up, it stays in your threat area until the end of the scenario.

- If you add this to your hand without drawing (e.g. via Research Librarian), the Revelation ability still triggers.

- You cannot choose to discard a Weakness card from your hand, neither for exceeding the max number of cards in hand, nor for card effects that make you 'choose and discard'. You can, however, discard it at random, or if an effect makes you discard your whole hand.

- If you have Dark Memory in your hand when you draw Amnesia, you must choose and discard all other cards, and keep Dark Memory.

- You can only play the card as an Event, you cannot commit it to skill tests ('Play' and 'Commit' are two different game terms).

- You cannot use Beat Cop's ability if you assign lethal damage/horror to it.

- You can use Guard Dog's ability if you assign lethal damage/horror to it.

- If the attacking enemy has a Forced ability that says "When attacks" or "After attacks", that ability does not trigger if an attack is Dodged.

- When a Massive enemy attacks each investigator in its location, Dodge will cancel only one of these attacks, not all of them.

- When making a Combat or Agility skill test, you may make an Intellect test instead.

- Skill icons on committed cards and other skill bonuses are not converted.

- If an investigator that is engaged with an enemy moves to a Barricaded location, the engaged enemy will disengage and remain in the investigator's previous location (after making an attack of opportunity).

- The word 'Additional' means 'in addition to other clues you discover', i.e. it modifies the number of clues that you would find, it does not add an extra effect on top of any other effects (e.g. does not stack with Burglary).

- The enemy is not defeated so you do not add it to your Victory Display if it has victory points, and reactions to an enemy being defeated (e.g. Roland Banks, Evidence!) do not trigger.

- You can use Burglary even if there are no clues on your location.

- If you use this to draw a card with the same triggering condition (e.g. Close Call), you can play that card during the same reaction window.

- You can move to any revealed location with no enemies, not necessarily a connecting one.

- Works with special tokens that reference the scenario card.

Drawn to the Flame

- Resolve any keywords and Revelation abilities on the encounter card before discovering clues.

- You can successfully Investigate a location even if there are no clues on it.

- If you use this to draw a card with the same triggering condition (e.g. "Look what I found!"), you can play that card during the same reaction window.

- You can use Stray Cat to evade an enemy that you’re not engaged with.


- This effect will evade and exhaust all enemies in your location, even those that you’re not engaged with (Aloof, and those engaged with other players).

- If you reduce shroud to 0, investigating this location will always be successful, because even if you reveal a -8 token, negative values are treated as 0, so you skill test result will match the test difficulty of 0 (you can still fail if you reveal an Auto-Fail token).

- "Max 1 per skill test" across all players.

- If you commit this card to another player's skill test, and the test is successful, you draw a card (not the other player).

- If you have any Weakness cards in hand (e.g. Dark Memory), you must choose and discard all other cards, and keep all Weaknesses.

- During the Upkeep phase, you draw a card first, then gain a resource. So if you draw Paranoia, you immediately discard all resources, then gain 1.

- His static ability affects each investigator in his location (not just the bearer).

- Roland’s ability can be used as normal after you defeat this enemy.

- "At the end of the round" effects trigger after "When the round ends" effects (e.g. The Barrier).

What Have You Done?

- You can use "After you defeat an enemy" Reactions and Fast actions (e.g. Roland Banks, Evidence!) before the “If...” Objective triggers.

- If Lita is defeated while a player controls her temporarily during "The Gathering" scenario (i.e. while she is technically not a part of that player's deck), remove her from the game (do not place her into any discard pile). This does not affect possible scenario resolutions.

- If an enemy should spawn at a location that is not currently in play (i.e. while you're at the Study), place that enemy card into the encounter discard pile without any further effects.

- This effect can cancel a normal Move action, as well as any card effect that would move an investigator.

- The ability works with special tokens that reference the scenario card.

- The ability ceases to apply if you play Sure Gamble).

- If you play a card while engaged with Yithian Observer, it will make an attack of opportunity against you and resolve its Forced ability, after you pay the cost of the card but before you resolve its effects or put it into play. If the ability makes you discard that card at random, you’ll end up having wasted resources without gaining anything in return. About Lita Chantler, I assume this also applies if she is discarded (by replacing her with another ally or because of Crypt Chill).

Re: the Necronomicon - so, if I draw it as one of the 3 cards for an Old Book of Lore, do I have to take it as the card I keep then?

But you don't draw 3 cards with the Old Book of Lore. You search the top 3 cards, and draw the one you like most. Which is probably not the Necronomicon.