The Math of Street of Silk 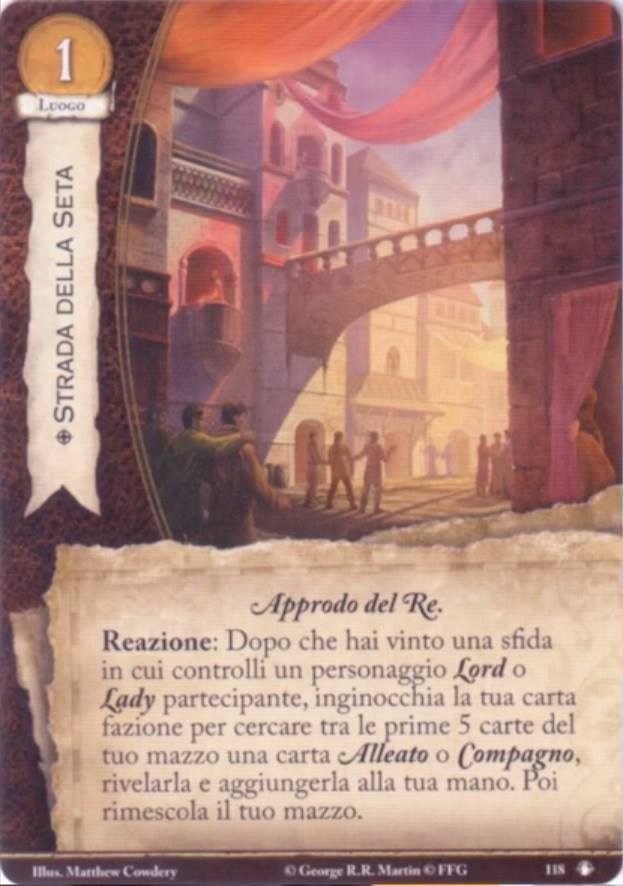 Street of Silk: 1 cost location:
Reaction: After you win a challenge in which a Lord or Lady character you control is participating, kneel your faction card to search the top 5 cards of your deck for an Ally or Companion card, reveal it, and add it to your hand. Shuffle your deck.

Let’s take a look at the math behind the success rate of Streets of Silk to find Ally and Companion characters.


First off, a list of every card in the game that is a valid target:

That’s quite a nice list of characters, including a huge number of staple claim-soak guys, plus some nice neutrals like Syrio and Littlefinger. Given that Hot Pie has been spoiled, and he works with companions, we can be sure that more are coming as well, so this card should grow in value in the future.


While fealty or crossing decks will probably struggle to include enough of these characters to make it reliable, a quick count of these characters in my banner decks reveals that I already had enough characters in most of them to make this reliable, before even modifying them to add more. For example: Targ/Lion: 6 Reducer, 3 Jorah, 3 Syrio, 1 Tickler = 13, and I could add more.
Most of my counts were coming up with about 12-13 characters in my banner decks, and I could easily modify the deck to go to about 15-16 without really losing much. So how reliable of a draw engine is this at those levels? First of all, we need to be able to win a challenge that includes a Lord or Lady. In general, that happens on most turns, unless you are getting destroyed, or are Night’s Watch. But if you don’t have enough Lords and Ladies in your deck, you won’t want to include this.

This method actually finds the expected value, of the average number of potential targets we will see, but that is not what we are looking for, because we do not get to keep ALL of the cards we find, only one of them.

When we want to calculate the probability of getting *at least one* target card, we need to use the hypergeometric distribution. This is a useful statistical tool to know for all CCG and LCG players, as it the method you would use to answer question like “If I include 3 copies of card X in my 60 card deck, what is the chance I will draw at least one in my starting 7 card hand”, or “If I have N cards of a certain type in my deck, what is the chance that I will draw at least 3 of them in my starting hand?”

The easiest way to calculate the hypergeometric distribution for most people will be to go to the following site:

For the field ‘Number of Successes in Population’, you enter the number of valid targets for the effect (the number of cards in the deck that you are hoping to see in the draw. So for our Streets of Silk math, if we had 12 cards of type Ally or Companion in our deck, we would enter 12.

For ‘Sample Size’ we would enter the number of cards we are drawing. For Streets of Silk, this is 5. If we were looking at initial hands in Game of Thrones or Magic the Gathering, we would enter 7.

For ‘Number of Successes in Sample’ we would enter the number of cards we need to draw to consider it a success. For Streets of Silk, we would enter 1. If you were asking the question ‘what is the chance of drawing at least 3 characters in my starting 7 cards’, you would enter 3.

Once you have entered your numbers, hit Calculate. You will see five answers appear.

If you want to know the chance of drawing *exactly* a certain number of cards, you would look at the first number, such as ‘P(X = 1)’ if looking to draw 1 of it. However, in card game this is not usually the answer we are looking for. Usually we want to know the chance to draw at *least* a certain number of cards. Therefore, we look at the bottom of the five answers, ‘P(X >= 1)’. This will tell us the chance of drawing one or more cards, not just exactly one.

Doing this we find the following:
With 12 Ally/Companion cards in our deck, the chance of revealing at least one off a 5 card Streets of Silk activation is .686, or 68.6%. We can also look at the P(X > 1) answer to see the chance we got 2 or more, and thus have our pick out of characters, and see that this is about 25.9%.

Here is a test to see if you can apply this to your card game deck construction:

1) If a Targaryen player has 43 cards remaining in their deck, 3 copies of Dracarys in their deck, and hasn’t drawn one yet, what is their chance of drawing a Dracarys from Shadowblack Lane (which reveals 10 cards)?


So how many Ally or Companion cards do we need to have in our deck before Streets of Silk becomes worth including?

Using the Hypergeometric Distribution calculation for N valid targets, and a 60 card deck, I get the following probabilities of at least 1 success: (My input is (60, N, 5, 1)).


What probability of success do we need to achieve to make this worth it?
Since the streets costs 1 card and 1 gold to play, we need to gain more value than this to pay back our investment. Also, our card gain is delayed, and we are drawing characters that won’t be playable until the next turn (except possibly for rare cases such as drawing and ambushing in Olenna’s Informant).

I would want to get 3 cards off this effect before I would say I had definitely made a gain off it. This means that if I had a 75% chance of success, it would take 4 activations. We reach a 75% success rate at about 14 targets, so I probably wouldn’t want to include it if you weren’t able to reach about that number.
If we have any trouble finding a Lord or Lady, or winning a challenge with them, it’s going to be even harder to recoup our investment.

Finally, using it kneels our Faction card, so we don’t want to play it in a deck with much of any competing faction kneel effects.


Clearly, this card is going to take some time to pay off, and has plenty of qualifications, but in the right deck I think it has potential.

In order to play it, we need our deck to meet the following conditions:
In the best case, we have some exciting characters in our deck that we are hoping to find using Streets of Steel, like Syrio or Littlefinger. This is probably the best effect of this card, imo, as these are excellent cards to draw later in the game.

Littlefinger will help you refill your hand, and Syrio can get you stealth to re-open the potential for successful attacks (or defenses against enemy stealth!)

Also, perhaps we are a deck that has a need to continue to find military claim soak throughout the game due to a military weakness. Such a deck would like Streets of Silk as a way to find small characters.

Any fealty deck is pretty much out, and crossing decks probably can’t get enough targets (or Lords/Ladies) with only one faction. Factions like Martell where people often don’t play many of their in-house Lords/Ladies might have trouble fulfilling that condition, though a deck like Martell/Lion could probably make it work and would have plenty of targets. Most decks with Lannister who aren’t using their House card kneel for other purposes look like good homes for this card, especially if you are looking to increase your chances of finding Syrio or Littlefinger later in the game.

In time I expect more cards to be added to the list of exciting Ally/Companion cards that you want to draw, so this should grow stronger over time. There will even be non-character targets as well, as we already see with Old Bear’s Raven. (Too bad Night’s Watch lacks in Lords and Ladies. Sorry Night’s Watch, FFG just doesn’t give you nice things).

Very nice article, and this will prove very helpful for everyone, even if the math was way over my head (and probably many others), despite having taken Calc II. I never was much good with probability. I don't know how much the numbers would change if you base things on a 58 card deck (given that you have the Street and a Lord/Lady in play, there are only 58 unknown cards to be drawing from), but maybe you should run the numbers based on that. Not sure if it's strong enough to care about, but even late-game, fishing your low-value economy and claim soak characters out of the top of your deck helps the quality of the rest of your draw, so its not a dead loss.