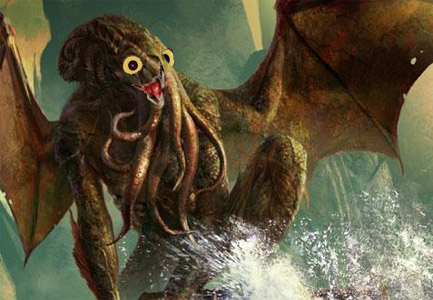 Welcome back for the 4th installment of the O, R'lyeh? series where we will delve into and break down a mono faction Miskatonic University deck! Today we will be exploring what the faculty, students, and professors of M.U. have to bring to the table to combat the many horrors that the Call of Cthulhu LCG has to offer.

M.U. is dominantly known as an aggressive faction seeing as how the majority of their good characters have that oh-so-coveted investigation icon and are relatively inexpensive to play. As a faction they are hands down the best at the investigation struggle. They pack more investigation icons than all other factions and they have many tricks to abuse the investigation struggle like Daring Buju, Expert Testimony, and Open for Inspection where they can score multiple success tokens in one trip to a story. Also, M.U. has the best card draw of any faction. Between cards like Obsessive Insomniac, Archaeology Interns, Focused Art Student, Alternative Historian, and Forbidden Knowledge they help to keep your hand chock-full of gas to constantly pump out new threats and answers to your opponent's cards.

With all that being said M.U. is not without its faults. They are lovers not fighters. They tend to get scared in the terror struggle or beat down in the combat struggle. That is where cards like Binding, Zero Visibility, Black Market Artifact, and Infirmary help the poor professors and students get to the investigation struggle. They are generally better when paired alongside a mythos faction to help shore up their weaknesses but if built and piloted right they can hold their own in a fist fight, they just have to play...unconventionally.

Today's list features some of the finest faculty and students the M.U. faction has to offer and just so happens to be the theme of this particular deck. 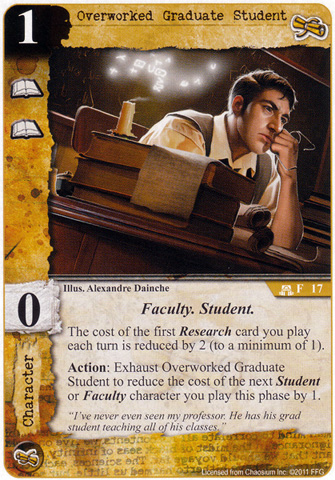 When I sat down to put together a thematic and cohesive mono Miskatonic deck I started to realize that almost every character that I wanted in my deck was either a student or a faculty member so it was easy to choose the student/faculty theme. When I ran across the Overworked Grad Student it just solidified my choice seeing as how he makes everyone cheaper to play.

Overworked Grad Student: Oh boy does this guy earn his name! He is fantastic in this deck and you want to see him as soon as possible. He makes everyone cheaper and he lets you play the expert testimonies for 1 instead of 2. No one really pays any attention to his second ability but he also makes research cards cheaper to play as well so that is just the cherry on the already delicious sundae!

Infirmary: Like I said before, M.U. is made up of lovers not fighters so they tend to get punched in the face...a lot. Luckily they can use that to their advantage by sending characters that have good enter play abilities to stories like the Archaeology Interns or the Focused Art Student that you know you will lose the combat struggle so you can play them again and draw more cards. If your opponent doesn't have an answer to the Infirmary than you will eventually power through them with the enormous card advantage this handy little support provides by constantly getting your characters back.

Flux Stabilizer: This card doesn't look like much on the surface but it has single handily won me more games than I can count. This card does work even when you don't think it is. It keeps your opponent's Black Dog, Master of the Myths, Dreamlands Fanatic, etc., at bay so you can stay aggressive at stories without getting surprised by any troublesome characters. This card is an all-star and I can't recommend it enough to any M.U. player.

Cafeteria Lady: "Ya want some corn!?" She is one of the only characters in the game that can exhaust an ancient one and she only costs 2! With the Overworked Grad Student she only costs 1! She is a fantastic addition and helps to keep the characters with terror icons at bay.

Elijah Conrad: Although he's not a student or faculty member he fits in this deck so well. Since both Ice Shaft and the Infirmary are locations you can play him and one of those from your hand at the same time, effectively getting a free action for a turn.

Daring Buju and Expert Testimony: I love these two events! They both help the weenies of M.U. get around the two struggles that they aren't good so they can get to the struggle that they are good and to score multiple success tokens.

Plague Stone: An obvious inclusion in a deck making use of infirmary. It provides a useful reset that is much harder on your opponent than yourself. All your characters come back to your hand while all of your opponents are lost to the discard pile.

The rest of the cards in the deck all try to accomplish the same goal of closing the game out soon as possible. Eryn Cochwyn and Whitton Greene both aim to nab an extra success token while attacking stories and Mage's Machinations and Ice Shaft aim to deal with troublesome characters.

When playing the deck:

The sooner you get the Overworked Grad Student out the better. If you can get him out first turn then you can start playing your 3 cost characters first turn as well. I love getting to play Whitton Greene or Eryn Cochwyn first turn so you can get 4 success tokens to pretty much guarantee a story on the following turn. Depending on what your opponent does dictates what cards you want to play and in what order you play them but remember to keep the pressure on at all times. When playing this deck DO NOT be afraid to lose some characters in the icon struggles. It's ok to lose a character in the terror or combat struggle if it means one of your characters will make it to the investigation struggle to get some much needed success tokens. I've noticed that when teaching the game to newer players they tend to not want to commit their characters to stories if they will lose one in an icon struggle. It's ok to lose one or two here and there if it means getting success tokens that will ultimately win you the game. For example, if your opponent has two characters in play and you have three don't be afraid to send each one to a separate story since your opponent can only block at two of the three stories. That means you will get three success tokens at one story and will only be two success tokens away from getting the story on your next turn. Now, this isn't always the best thing to do but I explain that situation to make a point and that point is don't be afraid to be aggressive.


Well, that completes the 4th installment of the O'Rlyeh? series. Hopefully this article has been somewhat informative or insightful for any of you Call of Cthulhu players out there. As always feel free to comment and criticize to your hearts content. I'm curious if I missed anything obvious or what your list of students and faculty would look like. Post in the comments!

Join me next time as I explore the horrors and obscenities of the Shub-Niggurath faction and all that it has to offer!

A great read. I really like the focus on mono faction builds as they feel a little more thematic to me.

I think the Alternative Historian is the better choice for a restricted card, straight up denying a terror struggle (or any other for that matter) is amazing and very frustrating when on the receiving end.

The Cafeteria Lady is one of my favourite MU characters purely for her ability to shut down some of the most terrifying beasties in the mythos. Pure comedy.

My MU mono deck tend to focus on the Polar aspect of things using explorers and the various cards that work well with them. That deck was built at the request of a friend (who doesn't really play but likes the theme enough to want to play) and it still causes problems for me, due to the right combination of speed and control.

Looking forward to the next mono faction article!

Just to make sure he gets full credit, this article is by Kamacausey. I just helped him publish it while Darksbane is stretched thin.

Thanks again buddy! I owe you! I had no clue how to get the thing posted. It was sitting there for like a week before you saved the day lol!

Plague stone was totally your call though! Great choice! I can't believe I didn't catch that when I already had infirmary in the deck!

wonderful article,just wonder why don't you include open for inspection to the deck for it would help rush very much:)

has someone made/done an article on making competitive decks from the core set?

Im new to this game