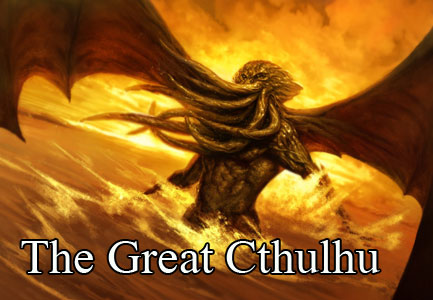 Welcome to finally another The Great Cthulhu article. Sorry that it has been so long, with summer and so much going on it is hard to find time to sit down and actually put an article together. However, with regional season going on, someone posted in the forums some helpful tips for new players that I felt was worthy of putting on the front page. User name Tusk was going to be taking his son and niece along with to a regional and so he thought of a list to help them prepare for the event. Here is his list, along with a few of my own comments on each suggestion.


1. Build your deck with a clear means for success.

Ask yourself the following question: how is my deck going to win? Your winning play is your deck’s primary strategy. It should be focused and specific. In this tournament, my deck tried to win by using the Negotium Conspiracy to control the game tempo and my opponent’s ability to commit to stories.

This is a fair point but sometimes harder to figure out in practice, because your deck doesn't need to have a crazy combo that will make you win the game. Your deck could just be playing good cards that eventually helps you win stories, however, you should know if you are going to be trying to win fast or go for the late game, and how you are going to control the opponent’s characters and such.

2. Build your deck with a secondary means for success.

You need to come at your opponent from different angles. Your two routes to success should likely compliment each other. In my Negotium deck, I also included character cost reduction as a sub-theme so that I could flood the board while my opponent stalled out.

This is a key thing, but not one that all the best decks need to do. If you have a straight combo deck you may not have room in your deck for a secondary means to win. However, every deck (besides annoying mil decks) should have some way to compete at stories.

3. Build your deck with answers to the following deck types:

You don’t need to totally Tech-out your deck, but you do need cards that negate or protect yourself against these basic types of attack. Some cards will even provide an answer to several deck types. For instance, including a Prepared Alienist can render a whole host of nasty cards such as the Dreamlands Fanatic, Black Dog, or Master of the Myths powerless.

This is something for any card game, you have to know some of the strongest decks and have some way to counter those decks without significantly weakening your main deck.

4. Every card in your deck plays a part.

A Magic the Gathering friend asked me if it was a good idea to build his deck with “always to be resourced” cards. I answered with an emphatic “No.” Every card in your deck should either contribute to your deck’s winning strategy, disrupt your opponent’s deck, or control the pace of the game. Deciding what to resource and when is where the real strategy of Call of Cthulhu occurs.

In preparation for my local Store Championship, I found myself resourcing the same cards over and over again and had concluded that they just weren't helpful to my deck. Then my brother (Yipe) recommended that I make a point of never resourcing those cards to see if that was true. After changing my playing style, I came to appreciate their true utility and ended up with a first place deck. Make sure you test every card’s usefulness before accepting or rejecting it as part of your deck.

This to me is the biggest thing so far, that I find new players making a mistake of doing. I even did it at first, as I always found out there was few cards that would almost always get resourced. Unless it is like a transit resource that is in your deck to be just that, then you should find a replacement for that card, even if it is a powerful but situational ability that can make a difference in a game.

You should be looking for 3 cards in your opening hand that will allow you to come out strong on the first turn. The only way to figure out which cards are your must-haves is by playing your deck over and over again. You should know at a glance if your opening hand has what it takes to carry the game or not. For example, if I drew the Negotium, a character destruction card, and the Dreamlands Fanatic, I knew I was off to a good start.

This is a suggestion that didn't really think about until read his post, however, most of my decks seem to have this. In my Shub-Yog deck I always wanted to start the game off with Priestess, Arthur Todd and any ancient one (hopefully Nug), and in my regional deck I always wanted to start game off with two 1 cost characters, and a 2 cost character.

6. Know when to Mulligan.

If you know what you are looking for in your opening hand, then you also know what not to accept. Most new players fret over whether to take a Mulligan or not. Without hesitation you should know to play or pass on your opening hand. Again, this insight only comes from knowing how your deck works inside and out.

This has lot to do with the last suggestion really. You want to know what you want in an opening hand and if you have a good chance at getting a better starting hand.

You don’t need a complex combo deck with obscure card synergies to succeed. The most important thing you can do is know what your deck does well, what cards you need to do that, and when to play those cards. You need to play your deck enough times against a variety of deck types to develop a kind of muscle memory for your card combinations.

Your deck should have a variety of cards that play well in the beginning, middle, and end of the game. The game ending cards are vital to sealing the deal quickly. You need to know what these cards are and when it is time to play them. For instance, once I had board control with the Negotium, the Red Gloved Man would bring a swift end to the game by adding his investigation. He’s not the best play in the beginning of the game, due to his high cost, but once I have the resources, he’s a game finisher.

I do seem to see most of the best decks having that finisher card. Whether it is a specific combo going off or a strong character, every deck needs those top cards that close games out and go head-to-head with ancient ones in the late game.

Your deck should make a strong first turn impact. Some players like all of the goodies a high cost card offers, but you simply don’t have time to “ramp-up” your deck as a strong deck can win in 3-5 turns. Take control of the game from the start and put pressure on your opponent every turn.

Very very very very important. Even if you're running a slow deck, you have to have a strong presence early on to slow your opponent down. Rush decks can win fast in this game.. like 2-3 turns fast! So, even if you can't win that fast you really do need to be able to stop your opponent from winning that fast.

Don’t let your opponent psyche you out just because you’re facing down the indomitable Y-Train. There is a bit of luck in this game and a great opening hand can really make all the difference. Before you start a round, ask yourself, “What do I need to succeed?” and then stick to your plan.

Of course, we couldn't have done it without my brother Matt, who was always a speed-dial away for advice, rules questions, and encouragement. It was definitely a collaborative experience that ended in a great time!

If you're preparing for your first tournament, hopefully you found a morsel here to help prepare you for the experience. Good luck and have fun!

Thank you Tusk for doing most of the work for me, hopefully with a few tournaments and then gencon and Worlds closing in, this can help new players get out there and play. Sorry again for my lack of new content, I already have ideas for the next two and hopefully get those up much sooner. I'd also like to point out to those not playing the game that the game has slowly been growing with majority of Regionals reaching around 12 players (not amazing but lot better then last year). It is a snow ball effect, if you join and get few others to join, it will continue to grow and grow! It is not too late to keep this great game going for many, many years. If you haven't played this game yet, I will strongly recommend picking up a Core Set and giving it a try.

Thank you for your time and I will make it my effort to have a new article up by end of next week (:

Sorry about being so long between articles. No I am not done doing these articles. There was  some confusion with getting this article up and been a crazy busy summer. I hope getting this out before gen con helps those going and hope to see others give it a chance there even if new and not great at the game still be fun experience. I do hope to get another article out by end of next week to make up for the long delay.

Good to see Cthulhu back on the front page mnBroncos

Got my first CoC tournament at the end of the month.