FAQ for The Red Wedding 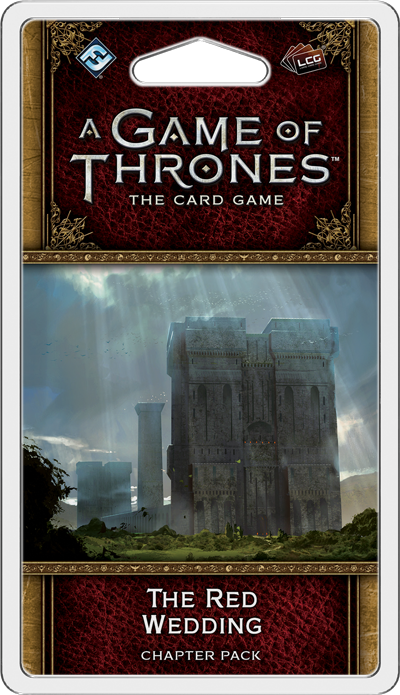 - Dacey's printed STR is 0. If her text box is blanked (via Milk of the Poppy or Nightmares), her base STR becomes 0.

- This card can react to any card entering play during the challenges phase, including duplicates and events like Risen from the Sea or Blood Magic Ritual (note that normally events do not enter play), as well as new plot cards being revealed (via "The Rains of Castamere").

- You can play this card targeting a character that cannot be knelt (already kneeling, or Ygritte). That character would still be affected by the "cannot stand" part of the effect.
(This is similar to how you can play Waking the Dragon at a standing character to save it from Tears of Lys.)

- In order for you to be able to play this event, each player must control at least one eligible target.
(Same as with Even Handed Justice, but different from The North Remembers; see Target).

- You cannot use effects like Winterfell Archery Range to remove a character that is "considered to be attacking" from the challenge (Walder's ability would immediately make that character re-enter the challenge, so there would be no change of game state).

- If you win by 20+ STR, the losing opponent must have at least 3 characters in order for you to be able to play this event. (Source)

- This plot's Interrupt ability is triggered after the winner of the challenge is determined, but before he is "declared". Killing the only defender will not make the challenge unopposed, or let you win by 5+ STR -- these factors have already been fixed.

- The interrupt is triggered before any "If you win the challenge..." delayed effects resolve (e.g. The Lord of the Crossing), and before any "After you win/lose a challenge" Reactions can be triggered.

- If you trigger "The Rains of Castamere" and reveal The Red Wedding, it is too late to use the plot's Interrupt ability.