"Oh, he was clever. He did not simply collect the gold and lock it in a treasure vault, no. He paid the king's debts in promises, and put the king's gold to work. He bought wagons, shops, ships, houses. He bought grain when it was plentiful and sold bread when it was scarce. He bought wool from the north and linen from the south and lace from Lys, stored it, moved it, dyed it, sold it. The golden dragons bred and multiplied, and Littlefinger lent them out and brought them home with hatchlings."

Welcome to the first installment of Budget Builders, a column geared towards new or casual players who are interested in expanding their collections to build tournament decks. All of the cards necessary for each deck that we build can be purchased for approximately $150 or less.

Greyjoy Banner to the Sun (link to decklist)
Uses 2x Core, Taking the Black, Road to Winterfell, Calm Over Westeros, Across the Seven Kingdoms, and Lions of Casterly Rock 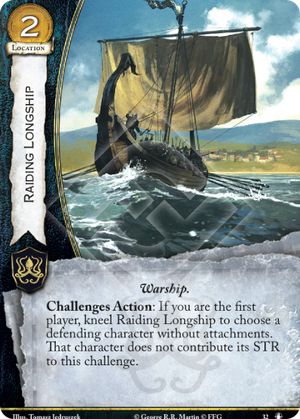 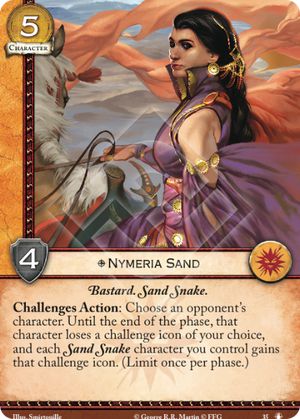 This classic combination sees Greyjoy’s unopposed challenge theme strengthened by Martell’s challenge icon removal. High initiative plots help you control the pace of the game by choosing whether to attack first (preferable with Raiding Longships) or second (so your opponent must kneel his attackers first, thereby weakening his defenses). Balon and Victarion are the power-grabbing MVP characters of the deck, but Nymeria and Asha can cause tactical problems for your opponent as well. Your goal is to earn victory quickly by taking double power from unopposed challenges with the ability of Great Kraken while proving resilient to your opponent’s murderous schemes with saves from Iron Mine, Risen from the Sea, and duplicates.

Beware of anti-synergy between negative attachments (like Milk of the Poppy) and your Seastone Chair and Raiding Longships. Watch out for Dracarys! (which can kill Nymeria, Asha, The Reader, and others) and Tears of Lys (which can target anyone without an intrigue icon). Also, while this deck plays aggressively, you can’t afford to lose too many challenges on defense, especially intrigue and power.

Other options in your card pool include Trading with the Pentoshi (a high gold plot with the downside of giving your opponent some cash too), Rise of the Kraken (a higher ceiling but lower floor than Clash of Kings), Pyke (perhaps more consistent than the 3rd Raiding Longship), and Euron Greyjoy (an expensive character but with renown incase your Balon and Victarion falter).

Further purchases you should target include a 3rd Core set (for Balon and the Fishmonger mostly), No Middle Ground (for the power-icon-stripping attachment called Condemned and the stealth-granting intrigue icon of Wildling Scout), and Tyrion’s Chain (for the double stealthing tricon named Esgred, the location control of Sea *****, the chump removal of Ser Arys Oakheart, and the blowout potential of Relentless Assault). 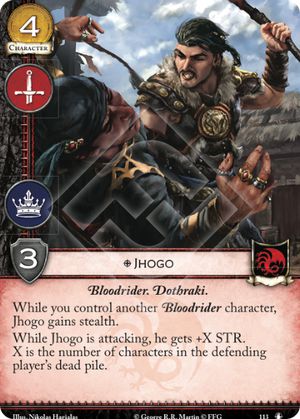 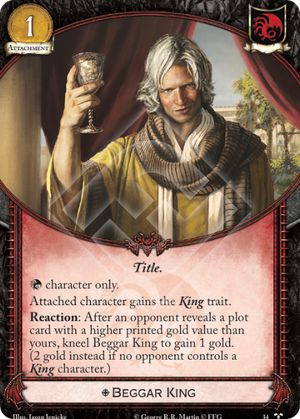 This build combines the aggressive military-focused Dothraki theme with the strength-reducing “burn” effects headlined by Daenerys and her Dragons. With Dothraki and Dragons working together, you can remove most opposing characters, leaving a clear path to victory. Your economy is heavily dependant on the attachment Beggar King, which grants extra gold when paired with low-income plots like Summer Harvest (which is technically zero) and Counting Coppers (which refills your hand). Most opponent’s won’t have the attachment removing resources to deal with both your Beggar King and your Milk of the Poppy.

Beware of factions that can match your military and intrigue strength, like Lannister. You’ll want to exploit their power challenge deficiencies instead. Sometimes you’ll need to use Viserys and Rattleshirt’s Raiders to remove Bodyguard attachments so your military claim can be more impactful. Other times, you can simply burn a well-protected character with Dracarys! or Plaza of Punishment, because terminal burn (which kills a character at zero strength) cannot be prevented by most saves. Finally, be careful with Summer Harvest. Sometimes you’ll counter an opponent’s Trading with the Pentoshi or Noble Cause and earn a hefty income, but you could walk into Varys’s Riddle, which sets your X to only 2 if the opponent decides to be first player.

Other options in your card pool include House Maester for a cheap bicon character, Tears of Lys and Put to the Sword for additional surprise kills, and Tourney Grounds to help afford (or bluff) your events.

Further purchases could include a 3rd Core set (for Daenerys, Rhaegal, Dracarys! and Targaryent Loyalist) and There Is My Claim, which includes the board clearing plot Valar Morghulis, the assassin Jaqen H’ghar, the search engine Pyat Pree, and the power-stealing location Vaes Tolorro.

If these decks don't feel right, check back next week for another installment of Budget Builders! In the meantime you can also check out the Community FAQ, which includes more information about the competitive scene, including tournament data, podcasts, and more. Great article, found this on Reddit! Any chance for a new series?