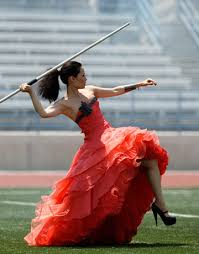 As a lover of all things dumb and fun, I've always been enchanted with The Red Viper. The most ridiculous combo card in the game, he's about to come into his own with the upcoming release of You Murdered Her Children later this week. But he's always been good, and on the heels of constructing Bob n' Weave I also slowly and creakily assembled this deck to try the Street of Steel spam to his benefit. 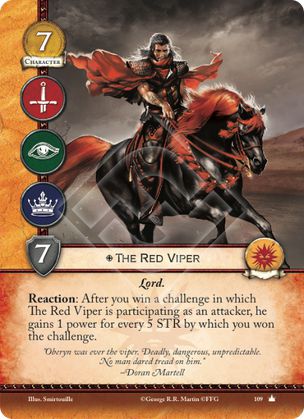 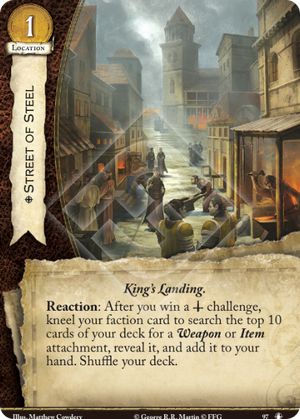 I decided to go with a banner for this one, thinking Kraken would give crucial assistance to covering him and letting his challenge hit as hard as possible with their easy stealth. They also have some good weapons for Steel searches, and a solution for one crucial Voltron-killer. 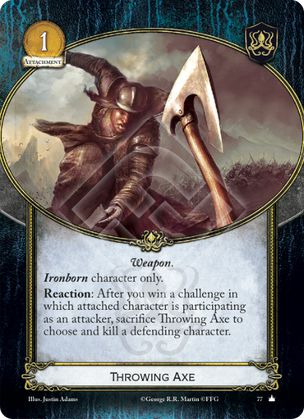 Banner Kraken doesn't bring with it another game-winning character though, and this idea currently lacks an answer for the mighty attachment control that must be found for any deck in the Craven meta. So I took a page out of the Lanni/Dragon playbook and put in a complete wildling module, fielding 2x Mance as another BAMF along with trips of the Scouts for more stealth and Rattleshirts for attachment removal.

This deck came together fast, I kinda pivoted to plots now to see if I could gather some clarity for the concept. Was not amazingly successful, but seemed a reasonable plot deck. 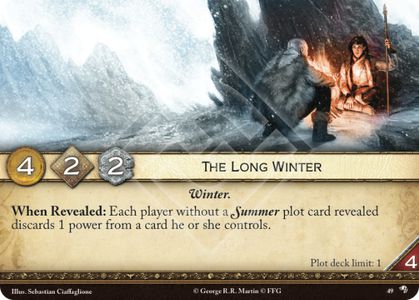 This still felt unfocused to me and I wasn't certain I'd get enough from Street for this deck, I just began flinging tech at it to see what stuck. It ended up seeming playable to me, I guess? 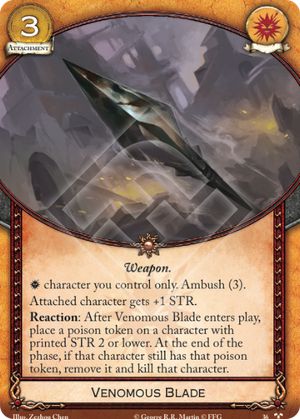 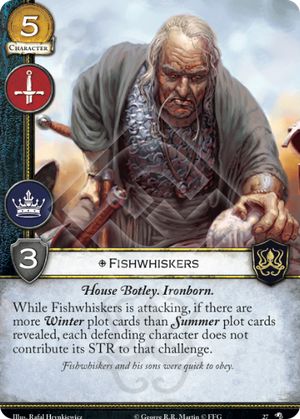 Filled in the rest of the traditional assortment of stuff, I'm sure you all can't wait for me to elaborate on the EXACT reason I decided to put 3x Nymeria in the deck, but I'm afraid I must disappoint my doting audience in this regard. There is intensely little native draw, I'm relying on individual card quality and my Summons a lot, as well as Steel triggers. Here's the list: 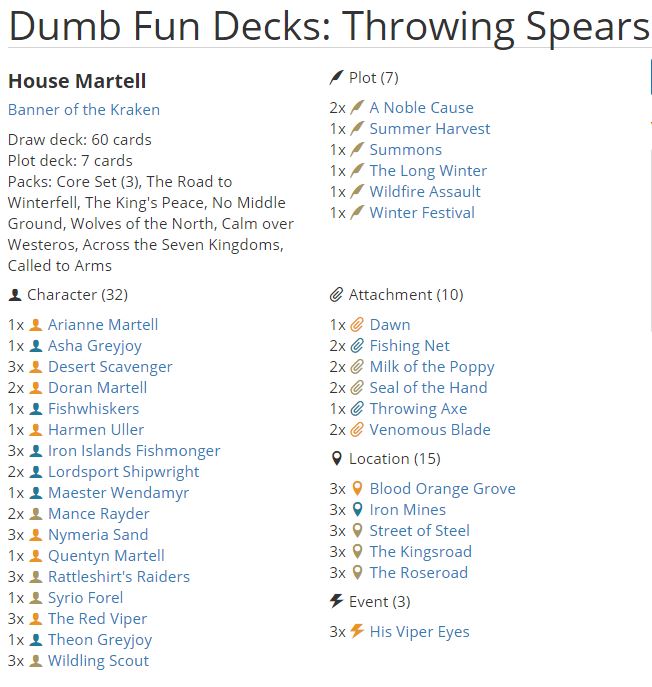 This deck is very non-traditionally constructed for the style that I'd normally render such a traditional “High/Low” curve deck in, thanks to the Street of Steel. This deck isn't seismic or anything but I did find it to be refreshing; in the little bit I played with it I often found the Viper and his arrival was usually overwhelming. The tech and proportions are very alien to me, but actually ended up feeling like it gelled pretty well, all I can say is it runs a lot smoother than it looks?

Certainly tweak everything to your own liking, but this is a adequately streamlined mid-game rush. You could throw in 2x YMHC after the Lanni box, I'd drop one Viper Eyes and one Steel for them. Other post-box tweaks are beyond my brain at the moment, but I can certainly discuss. Build it up, then hammer it home if the Viper is your preferred flavor and you want to try out a different build!

Quick question to any audience that may exist: Should I continue with off-week variants? I'm concerned with the smaller cardpool and my limited playtime that I'll strain my creativity and testing ability to the limit before long. I'm also sure I'll end up increasingly encroaching on concepts that may already exist in the wild somewhere, and I would prefer not to over-flood written content in one voice. Any opinions?

Why run Fishwhiskers at all if you only have two winter plots? Most likely he won't trigger at all. I'd switch him for a Lordsport Ship to mess with opponents locations. And the Throwing Axe is super conditional too

Great article as always mate. I'd actually suggest the opposite to MaShiKai - Fishwhiskers + Viper feels like a sweet-ass combo which you should totally build around! I'm actually pretty annoyed I never thought of it

I'd go up to 3 of Fiskers and add a couple more winter plots (probably cut the second Noble for a second Festival and cut Harvest for Ranger's Cache). I'd also go up to 3 Fishing Nets for redundancy. I'll just go with, why the axe? You have 1x of an item that has 5x targets. It can't go on the Viper which you built the deck around (and since the axe requires a keyword to be present on the card, not a lack of a keyword, we can't "blank" our way into using it like you did with Ice in your first deck).  Seems way too limited in when and how you can use it and it will probably be a dead card in most games.  Lets be honest...the axe is too conditional to be useful even in a deck built around it.  I made an entire deck around ambushing in axes and surprise killing with them.  I played the deck 3 times and in all 3 games I was able to trigger an axe once.  Either the winning attack didn't have an Ironborn target, the attack couldn't win, or the attack was unopposed...which is what you really want as GJ anyways.  If you want targeted kill I'd almost rather take a Spearmaiden or two to push big military with the Viper.  Dawn + Doren on the Viper should pretty much guarantee a win by 5 once you get to mid game.  You can also play Dawn or the Poisoned Blades on a Spear Maiden to force opponents to commit more blockers to prevent her trigger too since either will push her to 5+ str on her own.  I'll also add...I really want to find a good way to play that character and my first experiment didn't go so well so I'm trying another idea out with this suggestion.

I kind of ended up going with a "play to your draw" mentality on this deck (lots of 1x tech uniques), the fishwhiskers could easily be a second Asha; but I'd probably play those two winter plots anyway without him, so why not? He's obviously not amazing to start with, but when half the cards in the deck are mega-costed, you should have other options for primo characters early. I wouldn't lean into him any more than this myself, CobraBubbles is proposing removing two economy plots, which would require a drastic change to the entire curve for me. Could certainly work, but would look very different. Want to share what you come up with, Cobra?

As for the Axe, I kinda noted in the article that its a random 60th card play, it could easily be a third Net or a second Dawn instead. It's just searchable, and since this is a "mid-game surge" deck if you get in on someone with a viper challenge plot 3-4 it really punishes them for trying to suppress his ability with defence. Whatever way, it's a warm card for your hand at least if it's all that comes up on your Steel. It's an intensely conditional card, for sure, but I figured "Why not, the rest of this deck is super atypical for me anyway, let's throw it in." It's also way cheaper and more searchable than Spearmaiden. Easy change if it's not your flavor.

Spearmaiden's a great 2x for a lotta decks, mainly Crossing or involving Lannister in some way (IMO). I don't think you saw it last week, Euphius, but I whipped out my Martell Crossing for a fast game after you left and it notched another win with 20 power on plot 3. Didn't see the maidens that game, but they've won me others with that deck.

Nov 02 2016 05:46 PM
There is a logical use for the axe in this build, then. In GJ I found either the opponent blocked with enough to win the challenge, negating the axe (and GJ lacks surprise boosts and its str reducers are very conditional) or would throw a few chuds to block you really didnt want to "waste" the axe on so it didn't get me uo either. In this deck, making thrm think twice about throwing bigger blockers to reduce the viper's win ratio, well that has value. Just needed to hear some logic for the use of a card that has been patently bad in the times I've used it...even in a dumb fun build. I like your approach on the Martell/Kraken build, but why is Mance in there? I get the wildings for attachment removal and extra stealth, but Mance? If his sole porpouse is to let you ambush some characters in for combat shennanigans, wouldn't Uller and Arianne achieve something similar? Those two cards also benefit from Doran so the Viper could go for even a bigger swing. Seeing how you have only 2 winter plots and was "forced" to include an extra economy one (Summer Harvest) to pay for him, I don't see what's the benefit in running him over the other 2.

I think Arianne should be a 3x for those reason and also because she can help you pay for your banner and neutral character cards with Blood Orange Grove/Scavengers, giving you extra usage of your in-house economy. She is also a standing effect, as the character she is switch with will come in play standing.

She also combos well with Asha and Fishwishkers, and I would consider running a Spearmaiden or 2 over Quentyn. In a deck like this, she should be able to trigger with ease, making her better than the knight in my opinion, and since she is a 5 coster, Arianne can jump her in when you know you can push for than MIL win.

Arianne is also an excellent target for the Venomous Blade, as she could recur it turn after turn (if you have the targets and money, of course).

I'm unsure about Theon. The stealth body is nice, but in my meta there's a lot of Starks so his vulnerability to being warded made me take him out. And I agree with the others that the Throwing Axe has a limited scope to be useful, while the Net would benefit you more. But since that's a nice card for this kind of deck (weapon toolbox), I would not alter it.