On Building a Targaryen Draw Engine 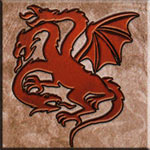 House Targaryen boasts many of the strongest cards in the game, including (arguably) the strongest locations and attachments. Forever Burning (Core) and The Hatchlings' Feast (ASitD) are at least on par with Martell’s renowned events. In addition, House Targaryen has access to repeatable recursion, the most potent form of character removal (effects that reduce the strength, or “burn,” an opponent’s characters), the strongest attachment removal, and fantastic surprise effects such as Ambush.

With such powerful options, why is it that this house has not steamrolled the other houses from the outset of the LCG era? Part of the tradeoff of these options is that many of Targaryen’s cards tend to rely on influence, so that a player must manage two resource curves – gold and influence – more carefully than in any other house, thereby making it necessary to run more locations and fewer cards that help the player win. Another reason may be the popularity of Narrow Escape (KotStorm). (Narrow Escape is especially hard on House Targaryen, because it gets around the “cannot be saved” aspect of burn. Since a Targaryen player must often combine multiple cards to burn an opponent’s character, the disparity is exacerbated by the fact that the opponent can play a single card to return any number of characters to play.) No doubt these and other factors play a role, but I believe a more fundamental obstacle is that setting up a resilient “draw engine” is extremely difficult in a Targaryen deck. (A “draw engine” refers to the components of a deck that give it repeated draw. A draw engine can be comprised of many one-time draw effects, but is typically more efficient and successful if it involves consistent, recurring elements.)


Why Is Draw Important

A fast, resilient draw engine is always useful, but it is particularly crucial to the success of a Targaryen player. Access to more cards (the advantage excess draw affords) gives a player more options (and solutions) for dealing with an opponent’s cards. This is critically important for houses that take longer to win. The longer the game, the more important draw is to (1) quickly access an effect that will slow the opponent down early, and (2) continue to draw until you find the right combination of cards that will win. This differs from a faster “rush” deck list, such as those often run in House Baratheon or Greyjoy, that can rush to victory before other options are needed. Moreover, unlike House Lannister or Martell, most of Targaryen’s potent effects rely on combinations of cards, such as strength modifiers + a lethal “burn” effect (all fueled by influence), or Lady Daenerys's Chambers (Core) + characters + attachments. A Targaryen player must therefore use more cards to initiate a greater effect…playing with Targaryen cards is often an “all or nothing” gambit.

This raises an important question: Can other card-advantage mechanics such as “recursion” or “saves” replace draw? To some extent, yes. Once I have drawn all of the appropriate solutions, recursion gives me repeated access to them. But recursion is not a replacement for draw; I can only reuse “solutions” that I have first drawn into.

House Targaryen possesses many draw and card-advantage effects. Unfortunately, most are very effective only after several components are brought together. For example, Maegi Crone (BtW) is extremely efficient if one has the burn pieces and the ability to play them. The Targaryen player can often draw 3 extra cards per turn when reaching this point. Xaro's Home (Core) can be similarly effective when the Targaryen player has the attachments and influence to take advantage of the effect. Unfortunately, collecting the various cards to ensure one has multiple pieces and resources to pay for them typically happens only after having drawn many cards. This presents a paradox: You need to draw in order to start the draw engine.

Secondly, once a Targaryen draw engine is running, it is often very vulnerable to the opponent’s effects. Because much of Targaryen’s draw is character based – Maegi Crone, Jhogo (OSaS), and Street Waif (AToT) (for draw-like recursion) – it is susceptible to the increasing number of character removal effects. Maegi Crone and Street Waif are also vulnerable to Threat from the North (PotS), a staple in most Targaryen deck lists, given that when used effectively it can act as a single-sided Valar Morghulis (Core). (Note: Despite his inherent weakness as a character, Jhogo is a near auto-include in every Targaryen deck, because his effect is much less situational and much more resilient than most other options.)

Nevertheless, there are strategies for mitigating both of these weaknesses. Most of the strategies involve heavy reliance on neutral draw engines.

The use of the Kings of Summer (ASoS) agenda, in combination with neutral seasonal draw, can act as a reliable draw engine. Although the summer agenda requires a combination of cards – namely if played in combination with the Black Raven (ASoS) – the attachment is easily searchable using the A Time for Ravens (ACoS) plot and is difficult to remove, since the Black Raven is immune to all non-Raven-traited effects. Samwell and Gilly can be added to bolster the season-based draw.

Although Targaryen’s in-house season-based effects are not as powerful as Greyjoy’s, Fairweather Followers (ASoS) and Red Warlocks can add power and additional options to the deck. A typical Summer Targaryen deck draws 1 extra card per round with occasional rounds of up to 3. (My guess is that it still probably averages less than 2 extra cards per round.)

Perhaps more accurately referred to as a “King’s Landing” deck, this build relies heavily (almost exclusively) on King's Landing (SaS) for draw. The strength of this deck is that because the draw is location-based, it is particularly hard for the opponent to remove from play (because effects that discard locations are less common than those that remove characters), and an effective build can easily draw 3 extra cards per turn by round 4. Shadows also offers further, albeit situational, protection. The major costs, however, are threefold: (1) shadows tends to be gold intensive, exacerbating the problems caused by Targaryen’s need to balance two resource curves; (2) the player must run numerous King’s Landing-traited locations to ensure he/she always has more than the opponent (a condition of using King’s Landing for draw); and (3) to take full advantage of this draw engine, a player must devote a significant portion of the rest of the deck to shadows cards and related effects. For this reason, shadows-based draw is usually slow and almost always found in a control or “burn”-oriented deck list.

In addition to the above draw engines, Targaryen players may resort to other neutral draw options. Heavy reliance on Val (RotO), in particular, can help to jump start a draw engine. Even though such use of Val will unavoidably lead to discarding (or inopportune play of) cards such as Khal Drogo (Core) or The Hatchlings' Feast (ASitD), it is usually worth the risk of discarding a couple of powerful cards early in hopes of drawing into the multiple components (influence, burn, etc.) necessary to establish a more sustainable draw engine for the rest of the game. Light use of Val is also an option, but as a 1 STR character, she is very vulnerable to character removal and unlikely to last more than 1-2 rounds.

Another possible option is to run out-of-house draw effects. Lannister’s supremely efficient Tommen Baratheon (SA) and Golden Tooth Mines (Core) can be used. Unfortunately, Tommen becomes much less attractive with a +2 gold penalty, considering his low strength, and 4 gold for a non-unique location risks a slower setup phase and is costly when managing the dual resource curve.

My hope is that the forthcoming Targaryen-focused expansion will offer more resilient, less combination-intensive forms of draw for Targaryen players. If it does, I expect this House to move from last in terms of overall competitiveness to the top 1 or 2 slot. The upcoming 2011 Regionals Competition season (or GenCon World’s Championship, depending on the release of the expansion), will offer insight into how useful the new forms of draw ultimately prove.

Mar 21 2011 11:44 PM
I really love articles like this, helps me clarify thoughts and hammer out strategy. well written and i appreciate it. Apr 28 2011 03:30 PM
The new Queen of Dragons pack does have some options for draw/search, but it also has some location destruction cards. So depending on the meta the King's landing build may become vulnerable (especially if you're the one running it). Jul 30 2011 04:39 AM
@Twn2dn: Would be interested in a post-QoD addendum, since it's been out now for a while. I've seen a couple brief posts you've made on the FFG about the box being a bit of a disappointment (as far as raising to tourny-level), but an in-depth article would be most welcome!