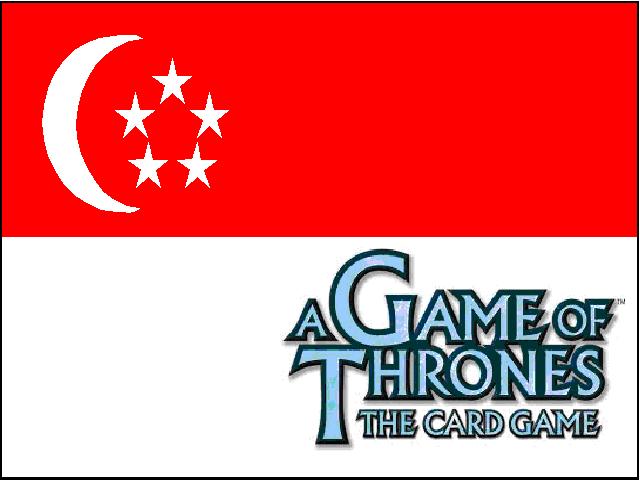 First and foremost, I would like to thank all players that came down to Gamersaurus Rex for the Regionals on both 22nd & 23rd June 2013; this report would not be possible without you guys!! Thanks to Darren GRex for hosting & being the TO for the event!! Also, much appreciation to Ewan Mah for being the announcer at the Joust event.

We had a great showing of 13 players at Gamersaurus Rex on 22nd June for Joust & 8 players on 23rd June for Melee, all ready not only to compete, but have an awesome time playing agot.

For Joust there were 5 Rounds, and Melee 3 Rounds.

This is my first time at a Regionals, I previously played 2 Joust, 1 Melee Tournament & a Melee League. But, this Regionals was the first time I finished top in Joust with my Greyjoy The Long Voyage. For Melee, I came in 3rd with my Greyjoy Aeron Damphair No Agenda.

My first opponent was Gene, who was also playing a winter deck! He made full use of my White Raven (TWoW) to allow his Baratheon characters to not kneel to defend during winter due to his HoD location,The Wall (TWoW) effect. I made a mistake and allowed him to go second for 3 rounds, before I finally made him go first until the 7th round so he would have to kneel some characters before my challenge if he wanted to attack. Also, in order to control his not kneeling to defend during a turn, I shuffled my White Raven back into my deck with my Carrion Bird (TWoW) after winning a military challenge, causing him to contemplate whether to kneel down some of his characters to prevent me from getting unopposed intrigue and power challenges. I won at the 7th plot round.

The second Bara player I faced was Jonathan, running a mean Baratheon TLV power rush deck. Jonathan was actually very close to winning me! By the end of his second plot he had 12 power! 2 of which were on his
Knight of Flowers (SaS). I Valared on my 3rd turn to ensure his Knight of Flowers was in his dead pile. He chose me as first player during my valar turn, after which I played a crucial card which he said totally was cause of him losing, Gylbert Farwynd (GotC), rendering his reducers almost useless except to bring out Stannis Baratheon (Core)Stannis. He continued to play Dale Seaworth (AToTT) which was Marched to the Wall (LoW) on turn 4. I played Newly Made Lord (TftH) to discard his crucial King Robert's Hammer (TBoBB), and finally choked him with my claim 2 plots which I dealt out consecutively the next few rounds.

Chong Hao is a fairly new player to the game, playing a very interesting Neutral Brotherhood Deck which I've never played against before. Moreover, it was the I did not drew a single Ice Fisherman (TWoW),
Wintertime Marauders (ACoS) or White Raven. I decided to try a choke without winter. He started off pretty well in first 2 turns, having 4 power on his
Thoros of Myr (RoR). But to his dismay, I Marched to the Wall his sole Thoros of Myr, slowing him by 4 power. I proceeded to do a massive choke with
Burned and Pillaged (FtC), The Sparr (APS) & was able to take control of his The Roseroad (KotStorm)
and The Searoad (KotStorm) with
Support of the Kingdom (Core), causing him to be unable to play more than 2 characters each round, which led to many unopposed challenges. My first ever win without ever playing winter the entire game. I was so used to playing winter that he had to remind me my plot The Winds of Winter (TWoW) couldn't take effect!

My 3rd Bara player of the day! Mr Tong, a really experienced player that played agot since the CCG period, was the first ever player I played Game of Thrones with at Gamersaurus Rex. It was really nice to face him at Regionals, but we decided that since both of us were the only players, at that point, with 3 complete wins & no loss, we would save our strength for our final round, and we declared draw. Although I did have a fun match with him which he jokingly said I would have won since I managed to choke him from playing his Wildling Horde. He was playing an Aggro Bara Wildlings deck which had out-of-house Wildling characetrs like Jon Snow (ASitD), using loads of murder effects like Terminal Schemes (LotR), Die by the Sword (LoW) and heavy claim 2 plots. I felt he would have won though. Mr Tong's longest game was against Ewan, 6 plots to win. Rest settled within 3 plots to win.

My first and last Lannister player of the day was Duane, running a from what he says, a control-type of Lannister. I managed to win initiative on first turn with A Time of Ravens, allowing me to play not only white raven, but also The Sparr with dupe and a Burned & Pillaged, which ensured a consistent -3 gold for him for the rest of the game. Yet, he was still able to use Coin Mints and Golden Tooth Vaults for gold. We had an interesting play of events, when I wanted to trigger Wintertime Marauder's Winter effect to discard a non-unique card, which he played A Lannister Pays His Debts (Core), I answered with Finger Dance (WLL), he continues with another A Lannister Pays His Debt, which I responded with Seasick (KotS), finally forcing him to cancel with The Iron Throne (LotR). At a point of the game I even Marched to the Wall Ser Jaime Lannister (Core) with a duplicate! In the end I played out my renown Asha Greyjoy (WLL) and Balon Greyjoy (KotS); power rushed to win.

From Left to Right: Tong Yee, Me, Shawn Wong, Duane

*A player, Duane, left in the middle of his first match. I didn't manage to see what he was playing.

I was able to do a mini power rush with Superior Claim on the first turn, only to get powered off (which I expected) by Billy and Elmer. I The Hand's Judgement (TTotH) Elmer's
Sitting the Iron Throne (AToTT)
during first match, causing him to be unable to use its recycle effect, and him didn't get to play another one throughout the game. Also, I took Elmer by surprise by using my
Longship Black Wind (CbtC)
to give Gene's character deadly during a seemingly harmless power challenge in which a Kingsguard paid the 'Iron Price'. In the end, Billy did an awesome play even after 2 of his unique Sand Snakes got valared off, and power rushed with his
The Red Viper (APS)
to reach 15 power before me.

My match was at the back table

I Hand's Judgement a Seductive Promise (Core) in the second match, which would have caused one of my characters to be allured by Lawrence.
I managed to trigger Euron Crow's Eye (TGM) draw effect 5 times throughout the match. I milled everyone's deck a total of 10 times when they each declared a challenge against me, and due to a
Drowned Disciple (KotS)
effect. By Turn 4, Andreas was sitting at 14 power so close to winning. During my challenge phase, I tried my best to claim as many power as possible, from 9 to 12 power before I decided to seal my position on the table at second place by doing a power challenge at Andreas allowing him to trigger 2 Taste for Blood (PotS) to win the game.

We opened with 3 Summoning Season (Core) and a Loyalty Money Can Buy (QoD). The 2 Quentyn Martell (VD) and my Aeron Damphair (VM)
were all summoned out on the first turn. All of us managed to get our characters killed off during the game to become our agenda.
I allied Gene first turn, Andreas with Billy. Billy was leading by turn 2 with 12 power, 4 power on his red viper with a duplicate..

The climax of the game was on Turn 3 when both Gene and I opened Valar Morghulis (Core) which killed off Billy's 4 power Red Viper (APS) with a duplicate and Gene's The Laughing Storm (GotC)
with a duplicate too.
I killed off Andreas's solo Arianne Martell (PotS) with a military challenge by my carrion bird.

Billy had Bungled Orders (OSaS)
4th turn. Andreas lost 2 challenges then, and had to bungle 2 plots; the rest of us praying it's not valar. (In the end he didn't even have Valar Morghulis in his plot deck!)

By turn 5, Gene had 10 power, Billy 9 , me 9, and Andreas 6. Andreas played Ser Arys Oakheart (PotS) to discard my Scurvy Cutthroat (KotS) which I would have used to discard his Taste of Blood or Body Guard which he played next. Billy & Andreas wiped out my hand with their Intrigue challenges, rendering me dearth of shenanigans. Afterwhich, Andreas did a fantastic comeback; power rushing with renown & Taste of Blood on Ser Aerys Oakheart and Ser Gerris Drinkwater (CD) to reach 14 power.

Gene sealed the game by power rushing from 10 to 15 power with his challenges with Salladhor Saan (TPoL) leading the way and a Superior Claim to win the Table.

Ultimately, it was a very interesting, fun and challenging Regionals. I hope to see more players for future Joust or Melee Tournaments. It was really nice meeting the new players and catching up with old friends.

With my buddy Jonathan Lek and the loot from our Regionals.

Thanks alot to Jonathan Lek for advising me to switch from Stark Siege to Greyjoy TLV Choke & Xavier BNick for giving me advice on building my Aeron Damphair Melee deck. Thanks to all players that came for Regionals & thank you for reading my first ever Regionals Report!!

If you happen to be in Singapore, do drop by Gamersaurus Rex at Upper Thompson Road to put your swords to the test on every Wednesday Nights!!

"What is dead may never die, but rises again, stronger and harder."
~ Aeron Damphair