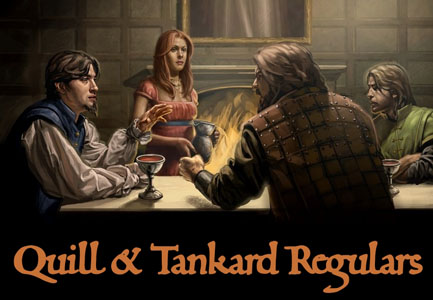 Horrified, the young apprentice looked at the mead dripping from the old Archmaesters beard onto the greasy floor of the Quill & Tankard. He dared even not look up to face his eyes.

So. No going back now. He would never obtain that Valyrian Steel Link anymore.

What's done was done. Even so, burning bridges behind you is always a risky game.

Beware the Sphinx is a series of articles concentrating on important cards with several peculiar, complex or unintuitive interactions. An emphasis is kept on both new and competitively relevant cards. Remember, the Sphinx is the riddle, not the riddler.

With the Warships for A Song of the Sea still on their way to our shores, we're looking a bit backwards again this week in Beware the Sphinx and talking about a card that was causing a bit of confusion around the time of the World and European Championships last year. The culprit this time is the plot card Burning Bridges, and the confusion was caused by conflicting information on how it should be interpreted. 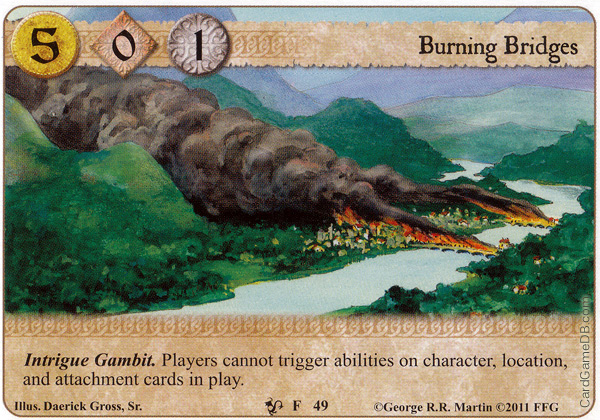 Doesn't seem all that confusing at first glance now does it? Well, the problem here is the part triggered abilities on ... cards in play, which in AGoT rules terminology only exclusively refers to abilities that are, well, printed on the card. So what's the problem then, you may ask? Well, to understand the issue a bit better, we need to have a look at gained abilities and what they do.

Using a duplicate to save a character
is considered to be a gained triggered
"Response:" action. Thus, it is treated as a
triggered effect and may be canceled, but
because it is gained (and therefore an ability
of the card attempting to use the response), a
character who is "immune to triggered effects"
can be saved by using a duplicate, as a card
cannot be immune to its own abilities.

Now, it has been confirmed (see Rules Forum thread here) that gained triggered abilities are exempt from Burning Bridges, thus allowing them to actually be used when it is revealed. Seems completely reasonable, right?

However, there's a very important subset of gained abilities that we didn't discuss yet, that also fall under this ruling. Gained triggered abilities granted by a card itself. Look at the text on cards like Maege Mormont (AHM), Ser Gregor Clegane (LotR), The Iron Throne (LotR), Robert Baratheon (KotS) or most Brotherhood characters for that matter. See where we're going with this? Essentially, what we end up with is the fact that those cards can all trigger their abilities with Burning Bridges revealed! Now that's Sphinx material, if anything.

There are also some other details that one should remember when playing with Burning Bridges. It does not affect triggered abilities on cards entering play if the ability is triggered from an out-of-play area. Examples of this would include our usual culprits Meera Reed (TftH), Bloodrider (MotA), Catelyn Stark (LoW) and Khal Drogo (Core). However, cards with abilities that are triggered after they enter play, like Castellan of the Rock (BoRF) or Long Lances (THoBaW), cannot be triggered with Burning Bridges revealed.

Similarly, it's good to remember that Burning Bridges does absolutely nothing to passive effects, like those on Melisandre (RotO) or Bronn (LotR), allowing them to still take effect normally. And naturally since the effect on Burning Bridges is constant (and thus takes effect immediately after it is revealed), using a Burning Bridges against a Greyjoy player going for an offensive Valar Morghulis (Core) can be pretty effective, since it will stop them from using cards like The Iron Mines (KotS), The Iron Cliffs (HtS), Moqorro (VD) or Maester Wendamyr (KotS).

Is Burning Bridges a true Sphinx or just a regular kitty? Feel free to discuss in the comments below.

Q: Dear Archmaester,
when I play a House of Dreams (ARotD) deck, when exactly do I choose my HoD location? Do I always get to see which House/Agenda my opponent plays? This is important because if I plan to use Bear Island (AE) as my HoD location, and I see that I’m up against a Stark deck, it might be better to go for Harrenhal (ODG) instead.

A: According to the Core Set rules, you randomly determine one player to be First Player at the start of the game. That player announces his House and Agenda first, then the other players follow suit, going clockwise around the table. The HoD location is chosen right after a player announces his House and Agenda. That means that if the HoD player is randomly determined to be the First Player, he has to choose his HoD location before he knows which Houses/Agendas the other players play.

Antti Korventausta (WWDrakey) is a self-proclaimed Finnish AGoT philosopher and nitpicker, who also used to practice Quantum Mechanics, but found that it paled to AGoT in both interest and complexity. As a Stahleck regular and judge, he sometimes has oddly vivid dreams of understanding portions of the game. In AGoT, he'll play anything as long as it's suitably twisted... often ending up with something that has horns on it.

Helmut Hohberger (Ratatoskr) started playing AGoT in September 2010 and has never looked back (although his wife has, longingly). As a German, he loves rules - and I mean *loves* 'em. Try triggering a Response at the end of a phase on his watch, and he'll probably invade your country. He has actually read the FAQ, and was made a judge at Stahleck and at various other events. He sometimes answers rules questions on boardgamegeek and the FFG rules board. Some of his answers haven't even been contradicted, corrected or expanded upon by ktom - there is no higher accolade for a rules board morlock.

Every Maester needs a Raven on his shoulder. As a Finn, Iiro Jalonen (Ire) got pulled under the waves by Krakens years ago, and has never looked back. A self-inflicted Shagga and active member of the global AGoT community, he has always strived to know the rules of the game, in order to make them do ridiculous things.

Jan 25 2013 04:47 AM
I didn't know about the ruling on Burning Bridges and it's rulings like that that frustrate me at times. The text of the plot suggests that anything "on the table" is locked out from triggering. When reading the ruling it makes sense that "gained abilities" aren't affected, but it's hardly intuitive from the plot text.

Jan 25 2013 06:46 AM
Wasn't there a thread on FFG forums or somewhere where a Chinese player got an official ruling from FFG that this card prevents gained abilities as well? I see your link in which Nate French allegedly clarified it to mean printed on, but there seems to still be some confusion. Why not just put "printed on" on the card, FFG?

To me, it remains a Sphinx. But it is great for dealing with long lances and street waifs. Jan 25 2013 07:40 AM
Basically the situation was that Burning Bridges had been ruled like this for a long time (including by Nate, also at Worlds), but suddenly it came out that a player had received a different ruling (apparently from some unknown FFG employee).

To confirm how this should be handled Bolzano (one of the head Judges at Stahleck) sent an email to Nate, and he confirmed that this is the way the card should be treated... and was surprised of the existence of an alternative interpretation in the first place.

Since Nate and Damon are pretty much the sole authorities for AGoT Rules, and the answer given by Nate is also in line with the way card text has been interpreted in other cases, I think that we can pretty much rely on this being the correct interpretation. Besides, "gained" text is not "on" a card. It floats 3mm above it. Everyone knows that!

Wasn't there a thread on FFG forums or somewhere where a Chinese player got an official ruling from FFG that this card prevents gained abilities as well?


This has actually happened a lot, where a Chinese player has received a ruling that contradicts the official ruling so far and then posted it on the boards. Usually what it comes down to (at least in the threads I have seen) is that Chinese players have difficulty contacting American businesses directly so they need to use a government liaison, and often that liaison is not super concerned with making sure they convey ultra accurate information about the intricacies of a card game.

This has actually happened a lot, where a Chinese player has received a ruling that contradicts the official ruling so far and then posted it on the boards. Usually what it comes down to (at least in the threads I have seen) is that Chinese players have difficulty contacting American businesses directly so they need to use a government liaison, and often that liaison is not super concerned with making sure they convey ultra accurate information about the intricacies of a card game.

That is so bizarre. But it makes sense, in a roundabout sort of way.

Jan 25 2013 10:12 PM
I guess this is a case of "on" being interpreted as "printed on" much the same way that a card that blanks a "text box" is always blanking the "printed text box." Probably worth an FAQ entry if that's the case though.

Jan 30 2013 10:53 PM
It's an understandable assumption since FFG took the time to sometimes say "printed text box" and other times just say "text box." But, the FAQ makes it clear that when something blanks a text box, it is always the printed text box and not gained text or abilities.