The Meta: A Year in Review (Annals of Castle Black) 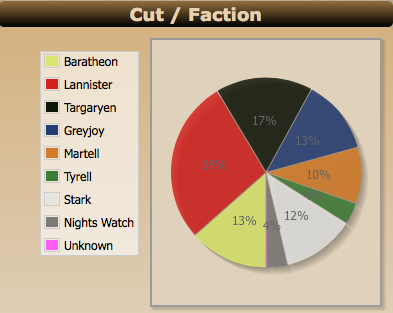 Note that the Annals, which are publically accessible here, depend on user submissions to be of any use to anyone. *Please* submit your local tournaments and events, regardless of size or competitive level, so that this tool can continue to be useful.

Caveat Emptor: When analyzing data, there are always many different approaches to pulling out the ‘relevant’ numbers. Here I’ve chosen to focus on representation of a faction (or faction and its banner) in the cut over time. While many other metrics may be interesting, this one strikes me as one of the better balances between sample size and representation of the ‘competitive’ game. I’ve chosen to look at periods of time defined by the most recent chapter pack available at the time, rather than by time period – partly because we expect new cards to be an important driving force of the meta, and partly because it generated groupings with larger # of participants, typically around or over 1000.

We’ve heard it time and time again – the meta is stale, the same factions are everywhere. So let’s have a look at how the meta, at least as it’s represented by faction choice succeeding in the cut, has changed over time. The accusations aren’t entirely unfair; Lannister has dominated the cut since the tRtW (CP2) meta – and the release of First Snow of Winter in NMG (CP4) seems to have exacerbated the effect. I’d like to point out their climb stalled in tKP, so (as an inside joke to my co-host on Beyond the Wall) this is NOT Gregor’s fault. Thankfully, Lannister’s prevalence as a main faction has been steadily dropping since then, presumably as people come better prepared to face them, although with a Deluxe box on the horizon we can expect them to continue to be extremely prevalent (hopefully with more variety in decktypes).

However, the rest of the meta has actually been pretty dynamic; Baratheon and Targ’s stellar starts have dwindled – slowly, in the case of Baratheon, and rather drastically in the case of Targ. This latter dive might well be attributed to the appearance of First Snow of Winter. Regardless of the reason, this has left room for Martell – once the “worst” faction” (least likely to be in the cut), now the second best – to make a slow and steady climb. Stark took a while to capitalize on some of the new cards in its Deluxe Box to rise to prominence, possibly due to its ability to combat the targeted kill triggers of Mirri/Gregor prevalent in many decks of that era.

The sad story, of course, is that of the two trailing factions; Tyrell and Night's Watch. They've had no real time in the spotlight. Tyrell had a brief period of hope in tKP, quickly ‘ruined’ by First Snow. Night’s Watch, which had remained <2% for a little while, is now climbing out of obscurity a little thanks to two stellar cards (Arry and White Tree) and a decent showing at Gencon & the Flea Bottom Fracas. With Craven just a week away, I predict they’ll be a real contender. Tyrell may have to wait for The Rains of Castamere.

Still, maybe this look at the meta isn’t what people mean when they say the game is stale. I’ve often heard “It’s not the (main) faction prevalence; it’s that I’m always facing the same cards”. So let’s have a look at the Faction+Banner (e.g. “How often do I see The Hound, or Nymeria, or Jorah Mormont) What’s changed, relatively speaking? Very little indeed for NW, Bara, Stark or Lanni – the same story, and, fair enough, about 2/5th of the time you’re going to see Tyrion in the cut. Interestingly though, Tyrell’s fortunes here certainly started off very well – but dropped rather steeply over time. Greyjoy spikes in popularity in CoW, and Targ doesn’t seem to continue its descent as drastically as it did as main faction only. Martell also looks very different from the main-faction only story, being carried by it’s banner as early as tRtW. Let’s take a look at those four factions+banner in detail: These graphs confirm our earlier suspicions; Greyjoy’s prevalence as a Banner peaks at CoW, likely due to Iron Mines (and Mirri making them even better), although it had begun to peak earlier, possibly as part of the earlier Lanni/Kraken builds leveraging FSoW and initiative control. Banner of the Sun’s fortunes sky-rocketed with Nymeria, gradually converting into using them as a main faction over time. It’s hard to pin this on any particular card; while Vengeance for Elia and Tyene did both help, I’m not sure either of them explains the gradual conversion of banner-into-main faction we’ve seen over the last 4 CPs.

Targ’s story also confirms what we saw before; their success fell as a main faction with First Snow of Winter, which made it harder to keep the hatchlings on the board. This loss was soon offset by a prevalence of Banner of the Dragon, on the back of Mirri Maz Duur – meaning that you’re seeing almost as much of Jorah Mormont as you were in the beginning.

Tyrell’s the real mystery to me. Banner of the Rose was extremely popular early on – and there isn’t really a distinct reason for it to plummet so. Perhaps people had more efficient sources of renown to replace Randyl and Loras, on whom they depended in the early meta? Whatever the reason, First Snow seems to have dismantled the beginnings of a Knights deck after CP3, and not even The Arbor could rescue Tyrell’s fortunes… although the efforts of one particularly devoted Tyrell fanboy’s Tyrell/Sun may yet give them some time in the… spotlight.

How do you interpret these data? How would you look back at the (almost) year of 2nd edition so far, and with what metrics? What will Valar do to all of these lines? 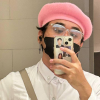 Rose Banners started to drop due to it being weak to Tears, Mirri, Tyene. For earlier packs, it was mainly bannered to Lanni, so the prevalence of the Lanni Crossing deck pulled away banner numbers, imo.

Great article overall! I will read it over and over again this week.

Thank you Istaril, that was a very interesting read!

Very nice article, thanks. It would be good to distinguish between Joust and Melee, though (in the database and then in the review).

Very nice article, thanks. It would be good to distinguish between Joust and Melee, though (in the database and then in the review).

The database (and the article) refer exclusively to joust.

There are a few reasons the database does not compile melee information. The first is that the number of submissions would be too low to get meaningful data, given the pace of the cardpool. Secondly, the second is that 'match-up' data isn't as informative (which decks beat what decks, for instance, in the cut) - melee seems to have consistently proven itself to be far more 'driver, not the car' format.

I would still love to get the kind of information that might be useful, the distribution of decks in the field, for instance... but currently, given my sources for tournament information, it would mostly depict the French meta, plus 2-3 US side-events.