Playing the Hobbit the traditional way with LOTR LCG 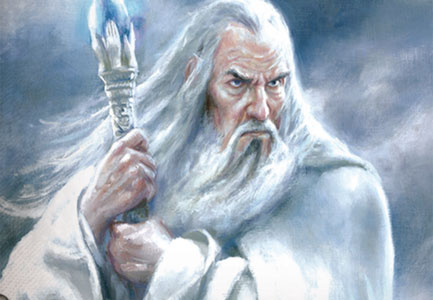 Recently, I had the pleasure and luxury of having a gaming partner (my girlfriend) that has a similar approach to gaming as I do. It was her suggestion, we actually tried our best to create decks of cards that would only have been around during the time of the Hobbit. We mostly focused on the heroes and allies for this. We tried to throw in some themed events and attachments, but there isn't really enough card pool to make an effective deck totally to theme.

We started our way through the quests after a little back and forth on synergizing our decks together. I almost always play tactics, and I actually realized recently that my spare tactics card pool is only about 60 cards that are not in decks. Literally, the Tactics section of my box of unused cards was about half of all the other spheres.

Synergizing decks between each other is really a powerful thing to do. Two people bringing decks together without talking for this co-op game make for wasted cards quite a bit. Since so many cards that are very powerful are unique, multiple players tend to have them.

We made her deck a secondary combat deck that becomes very strong at combat in the late game. My deck was built to handle early questing and to ramp up on allies. It was interesting that her deck with 2 spirit heroes was so much weaker than mine at questing.

I'm really addicted to A Test of Will and I wish there were some other cards that emulated it to give some other options for cancelling when revealed effects. I actually built Spirit into both decks to have 6 copies of that guy in there.


One of the lessons I learned with this deck that I played is that Fili and Kili are a very potent set of dwarves for decks that rely on the minimum 5 dwarf mechanic. I tried to always have one of them in my opening hand to hit my 5 dwarf total by the end of the second turn.

The 5 dwarf thing is harder than it sounds to pull off with the current card pool. Fili and Kili are good, but by the end of the cycle, I was starting to see why the hero version of Bombur might actually be alright. By the end of the first turn, you could activate your 5 dwarf bonuses.

Attachment: (8)
2x Hardy Leadership (Shadow and Flame)
3x King Under the Mountain (On the Doorstep)
1x Path of Need (Foundations of Stone)
2x Ever My Heart Rises (The Long Dark)

Event: (24)
3x A Test of Will (Core Set)
3x A Very Good Tale (Over Hill and Under Hill)
1x Burglar Baggins (Over Hill and Under Hill)
1x Desperate Alliance (On the Doorstep)
3x Durin's Song (Khazad-dum)
3x Hidden Cache (The Morgul Vale)
3x Lure of Moria (Road to Rivendell)
1x We Are Not Idle (Shadow and Flame)
1x Fortune or Fate (Core Set)
3x Sneak Attack (Core Set)
2x The Lucky Number (On the Doorstep)

We Must Away 'Ere Break of Day
We did pretty well with this quest. We basically outlasted the Trolls until Gandalf arrived and won us the day through progress. Lesley was still relatively new to the game, so I do believe we had to beat it in a second play through. The synergy between using all dwarves and having events that boost all dwarves was very positive. This quest is definitely a much better version of Conflict at the Carrock.

Over the Misty Mountains Grim<
It has been a while since we played the three quests in the first set, but I remember us actually handling this quest pretty easily. We cancelled the nasty treachery cards and we kept our threats below 38. The Giants did end up taking a chunk out of me, but by then I had numerous allies out and her deck's combat strength was up and running.

Dungeons Deep and Caverns Dim
I know I have heard a lot of complaints about the Riddles mechanic of this quest being very random, but each time I have played this box, I've never found it to be much of an issue. Guess I'm just building with cards that start with the right letters! We didn't have too much trouble with this quest. I could see these quests being a hell of a lot harder if we hadn't gotten the treasure from the trolls in the first quest.

Flies and Spiders
Flies and Spiders is a quest where Miner of the Iron Hills shines as he so often does. There really need to be some more cards that remove condition attachments. He is another staple card that is hard to avoid playing and when you don't have him, he is just so well missed. We didn't have too much trouble with this quest and it played out in that we took good advantage of timing with Bilbo waking dwarves that were poisoned and sort of min maxing the spread of poison tokens.

The Lonely Mountain
I misguided us on our first play through and the way we handled the Lonely Mountain was very poor. We didn't get all the treasures and the dragon just annihilated us when we moved on to the later part of the scenario. We never woke the dragon early, though I do love the way that mechanic just threatens you but doesn't have to happen to make the quest challenging. With some slight modifications to our deck, as shown in our final lists above, we managed to take all the treasures and actually put a swift end to the quest through superior willpower on the quest.

Battle of the Five Armies
This quest was the one we had the hardest time with as it was the least forgiving to our willpower heavy, combat average decks. We played twice and got beat quickly. We played a third time and were doing quite well, advancing to the final stage of the scenario and then had to put the game down for the night. We got back to finish the game the next day and then realized that we actually had no way at all of surviving Bolg and all of his bodyguards. That was a funny moment when our dining room table was clogged up with an unfinished game for a full day, only to pack it up and try again. Fortunately, two friends were over that day and one of them really wanted to learn how to play Lord of the Rings. So, I threw together an elf deck for one and a tactics deck for the other, trying again to only use characters that may have been there. I cheated a little and used the new movies as part of the benchmark for that. With that, it worked actually. The Tactics deck with Beorn, Bard, and the Eagles swept away most of the challenges and by the end of the game we were in pretty firm control. All the body guards still really made it a rough trod at the very end and we almost lost a couple of players before smashing Bolg to bits.

Our decks did actually do pretty well together. The only thing we were a little short on was early game combat strength. Also, locations became a hinderance on a few occasions.

Thanks for the article!

There is Elanor for cancel, and Power of Orthanc for condition-removal, but I agree, variation is good.