abUse the Force - Knowledge and Defense 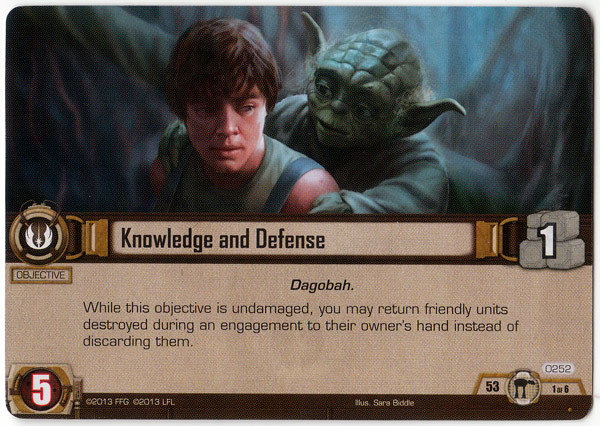 The resource potential and damage capacity of Knowledge and Defense are standard and unremarkable. The card's ability is interesting. While it is undamaged, friendly units destroyed during an engagement may be returned to their owner's hand instead of being discarded. There are two things that jump out at me right away, may and during an engagement. Let's examine the implications of these features in turn.

First, returning the unit to your hand is optional. There are interactions with other cards and game states that might make one not want to return the card to their hand, so it is nice that this is optional. Options are power, thus competitive players usually enjoy seeing the word may appear on these types of cards.

Also important to note is the fact that combat icons of different types (within the same unit) are resolved in the order chosen by the controller of the striking unit. So, when striking with a unit that has both unit damage and blast damage icons in an engagement against Knowledge and Defense as the DS, the striking player can resolve the blast damage first, putting damage onto Knowledge and Defense, negating its ability, and subsequently apply unit damage, with any destroyed units being discarded rather than returned to the LS player's hand. 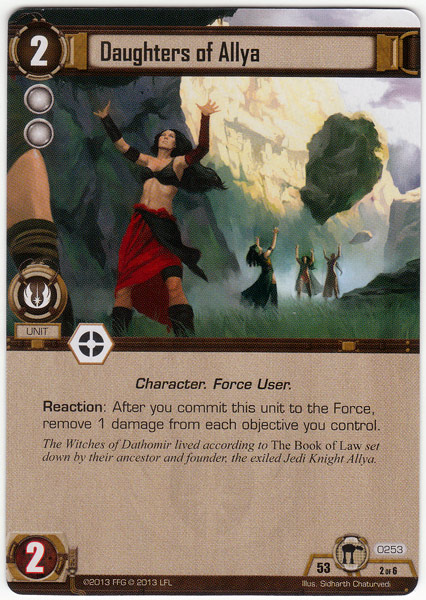 At first glance, this card appears slightly mediocre; there is only one edge-dependent combat icon. But, I think that this card has potential to be quite annoying for the DS. First, the Jedi now have another Force User, and one that is a 2x in this objective set; suddenly we all start thinking about the draw ability on Forgotten Heroes again. With the release of the Gotal Outcast, and now the Daughters of Allya, the ability on Forgotten Heroes has gotten better and better. The second thing that this card has going for it is a nice cost-to-damage capacity ratio and two force icons. In addition, after you commit it to the force, you remove one damage from each objective you control. Yes, the card says "each", which is excellent.

Daughters of Allya is a 2x in Knowledge and Defense, and so warrants the most careful consideration, since one will be drawing it consistently when running two copies of this objective set. At first glance, it seems like the Daughters' reaction ability is useless on the first turn, since the DS cannot attack during its first turn. But, with A Dark Time for the Rebellion seeing a lot of play right now, there are many instances in which the LS does begin its first turn with a damaged objective (or two). Imagine having your DS opponent reveal two copies of A Dark Time for the Rebellion in setup as you look down at the Daughters of Allya in your hand, smiling on the inside. Once you play it on your turn and commit it to the force, you effectively shut off all of the damage-dependent abilities contained in A Dark Time for the Rebellion, reducing the effectiveness of the DS's first offensive. In addition, the Daughters have nice synergy with Knowledge and Defense itself. They help prevent it from retaining damage, which helps to keep its ability active, which means that the Daughters are more likely to be returned to your hand than discarded, which in turn means that you are able to play them again on your next turn, and commit them to the force again, removing further damage from your objectives. Combined with the shielding abilities on other LS cards, these shenanigans could become quite annoying for the DS. I am excited to see what types of interactions people will take advantage of when building with Knowledge and Defense.

Yoda's Protection (53-0254)
This is a solid card. Who would complain about zero cost, and an ability that will most often repeat itself several times before the card leaves play? Many objectives have a damage capacity of 5, and are destroyed with an undefended attack from something such as the Devastator. Yoda's Protection helps objectives stick around longer, plain and simple. Interestingly, you can play Yoda's Protection on any objective, so you could enhance an enemy objective, if you wanted to. I cannot think of a good reason to do that currently, but perhaps in the future there will be cards that create some sort of penalty for having shielded objectives, or there could be some clever use for it in multiplayer; who knows…But, it is worth mentioning that the enhancement is not restricted to friendly objectives.

Protection (53-0256)
This card is not as versatile as Our Most Desperate Hour, but still has its obvious utility. First, fate cards resolve in ascending order, which means that Protection resolves before the DS fate cards Heat of Battle, Target of Opportunity, as well as Battle of Hoth, which is nice. Twist of Fate obviously negates Protection, but that is the expected risk in playing fate cards that we have all become comfortable playing around. Protection has synergy with Preparation for Battle, offering the LS yet another way to shield units. Protection also has synergy with Knowledge and Defense, since it helps reduce the probability of it taking damage. The obvious downside is that it is in fact a fate card, and so you have to enter a unit into an engagement for the possibility of enjoying its ability.

Confronting the Terror (53-0255)
This is like a LS version of The Desolation of Hoth, only better. Confronting the Terror can be played during either player's turn, which is nice. At a cost of three, it will be relatively easy to see this coming if you are the DS player. But, the DS has limited abilities with respect to dealing with events, although this card could be effectively countered with Imperial Suppression; yet, that just delays things, but could stop a devastating play. Also, It's Worse would cancel the effects of Confronting the Terror. However, Looking for Droids has not seen much competitive play, and is not a significant worry for LS players at this point. The flavor of this card is amazing. I like having the ominous Lord Vader appearing so large on it. Additionally, the three force icons make this an edge stack beast. The obvious awesome play would be to answer a strike from the Coruscant Defense Fleet or the Devastator with this. Confronting the Terror is expensive, but could be used for a wide variety of potentially clutch plays, and is otherwise a nice edge stack threat.

The first time I looked over Knowledge and Defense, I was not impressed or awed. But, the more my mind grinds away, dreaming up possible interactions and synergies, the better this objective set seems. It will be exciting to see how this affects the current body of competition-worthy Jedi deck types. Please share your thoughts, opinions, and play testing observations in the comments!

Jun 27 2013 10:38 PM
Great article. I was also thinking of this pod as a bit of an overly support-oriented focus, without any real meat. But this article gave me some ideas that I could see really working in a Jedi deck, or one that had a couple smugglers running around in it.

Jun 30 2013 12:10 PM
This pod just goes well with Gotals, i feel like we are starting to see the beginings of a jedi small guys deck, I know next FP that we will see the objective that gives all cards +1 Edge value soon the little small guys the jedi have will be winning edge battles and holding the force easy.

My problem with them is there is still no way for me to run Old be VRS luke/Yoda/Han The resource pods for jedi still stink and the new "resource pod" we got is really a boon for hoth decks more then jedi.