HERESY! The other card with Doom in its name 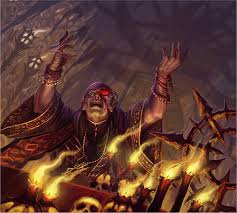 Keeping the pace up on Heresy (which needs to move fast, if it is to escape the orthodoxy-enforcing Inquisition) we dive in on yet another card that isn't so much under-rated as unused...

Prepare yourself, for this time we're engaging in some real Tzeentchian magic... The Mockery of Tzeentch

Look, chaos has some great cards, we know that. In fact, the card pool is so good that there are even cards that were rated 5/5 that don't even turn up in modern decks: Sowing Chaos and Slaanesh's Temptation come to mind as meta-defining cards that turned the chaos game upside down. When it comes to cool, disruptive tricks, chaos is right up there.

Chaos also has some truly awful cards. I'm not going to be writing a Heresy article about how to make a workable Blight Grenades deck, as I've tried and it can't be done (though I hope to be proven wrong, if anyone wants to take me up on that). Berzerker Warriors? Why would I ever want to use them when the best case scenario is them gaining Ambush? Doom Siren? Okay, starting to come together, but still not there.

Oft cited amongst the truly awful cards is our buddy here, the other card with Doom in the name,

No, not Doom. Not Doom Scythe Invader. Not Doomsday Ark.

Blimey, there's a lot of Doom in this game. I mean this card: 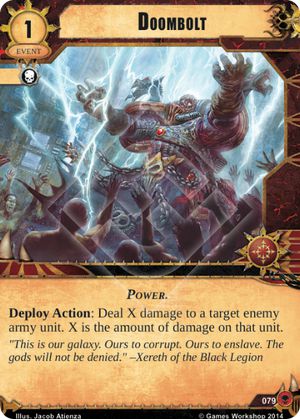 Jacob Atienza. One of the best artists in the game, with also some of the best cards... STC Fragment, Ymgarl Factor, Vile Laboratory...

But wait, you cry, I quite like some of those cards! Of course you do, that's why you're reading this column, because like me you want to love the cards that don't make the tournament scene.

You got to admit though, Doombolt is a bit of a stinker.

Removal/damage cards are often quite good. Klaivex Warleader is popular for some reason, and Zarathur's Flamers are pretty awesome. The thing those two cards have in common is sheer value for money and flexibility: you can gain some command, some combat presence, and some removal, all in a nice package.

But Doombolt? Its a removal card that is very hard to use on turn 1 of the game, and not that easy to use later in the game either. Damaged enemy units that haven't been killed yet normally means you've just lost a battle. Then, the maths has to work out just right for an opposing unit to have taken half or more of its HP in damage, and for it to survive being shielded.

Then there's that timing. Deploy Action? That means you can't use it mid-combat: while not telegraphed as such, it happens early enough in the game round that an opponent can play around it. Likewise, the king of direct damage - Zarathur - is nowhere near a planet in the Deploy Phase, so it misses out on his damage boost.

For sure, there'll be those wonderful moments when you manage to drop that Regenerating Shrieking Harpy just before it regenerates. Mostly though, it sits in hand waiting for an opportunity, then gets ditched as a 1-shielder.

However, with a little creative thinking, almost any card can be made to be useful...

Let's get straight to the decks! 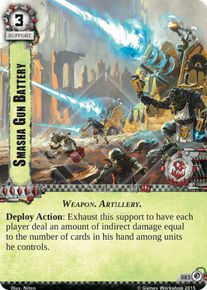 Deck One:
Nazdreg and Some Shields

For a Heretic like me, this is one of the big success stories in innovative card design so far. It turns the shape of the game upside down, mocking those Eldorath and Shadowsun decks that have 20 cards in hand (yet no support destruction). It performs as well, with Smasha decks doing well in major tournaments as the crazy wild-card opton, likely thanks to the strength and dominance of hard-drawing Kith and Eldorath decks.

The proper Smasha Gun deck, if there can be said to be such a thing, incorporates Astra Militarum allies for the sheer efficiency of HP that can be put on the table (Sanctioned Psyker, Griffon Escort, and so on). Some nutters even go with an Astra Militarum warlord. Generally speaking, the chaos faction doesn't have much to add to Smasha...

Nazdreg is the smasha warlord of choice, turning damage on your units into a boon.

These aren't conventional choices, but instead maximise the deploy phase damage output of the deck while nodding at HP. The proper smasha deck does better in command, but we just have to deal with that. Depending on tastes, feel free to replace Weirdboy Maniak with Mekaniak Repair Krew.

Most of the stuff here is just 2-shielders. You need 2-shielders when you fire off a Smasha Gun. Not only do they stop you obliterating yourself, but they also get your hand size down for the next activation.

Mulligan for Smasha Gun Battery. Just do it.
Yes this deck will go wrong as often as it goes right, but when it goes right... what a thing of beauty it is! 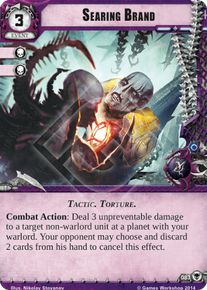 If you're playing Urien, you get instant kudos points anyway. Thing is, there are actually workable Urien builds. For sure, you pay more for Archon's Terror, but you've still got access to Archon's Palace, Klaivex Warleader and Ssylth Mercenaries, and you've actually got some of the best means to card choke and virtual card choke if you're willing to play the long game of draw control on your opponent. Sure, your 4x signature event is somewhat sucky (save for cheap delays to maximise Ssylth Mercenary), and sure, Kith and Morn get plain better warlord abilities, but you CAN play Urien and have a good game, believe me.

But to play Urien while running Doombolt at +1 cost? That's just stupid, right?

I prefer Heretical, but take a look....

Command command command. Oh, and Caius Wroth, who both provides extra hitting power, and sets up initial choke. With the low cost of this deck otherwise, its fairly easy to get your own hand size down, and if you can't, a lot of command plays aren't that good late game anyway.
Notable exception: Klaivex. This is a Heresy deck. If you insist on being conventional, then replace some cards with Klaivexs. Pfffft.
In fact, why not be unconventional and just ADD the Klaivexes to go to 54 cards? Its not as if Urien wants to draw his signature event, and a lot of functions in the deck overlap otherwise, so maybe a bigger deck is the way to go.

Command command command! A notable absence here is Suffering, as we don't actually care how many tortures are in our discard, as we're not using Soul Seizure.

The goal here is to get just shrink the game like crazy, to the point where your card advantage can create enough small unit deployments to win the game. Use Cuts to take out 1HP cappers. Using Searing Brand to take out bigger units. Use Doombolt to finish off bigger units, like those pesky Elites. Oh, and should another Elite remain? Power From Pain time. This deck is all about removal, removal and more removal. Its not terribly efficient, but the idea is that your command strength and choke allows you inefficiency.

No room for draw control shennigans here. Just choke. Use Oubliette's draw function sparingly, ideally only if a deploy pass has happened across the table and you can create a discard. 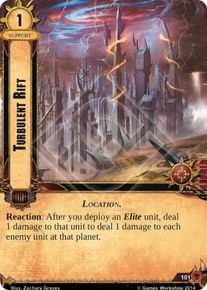 A properly under-rated card that could probably justify an article all to itself, Turbulent Rift is essentially a repeatable AoE1 event that can't be nullified. When it was introduced, it wasn't much good, because there was no practical way to run enough elites to make it consistent.

Now, of course, that's all changed. Elites are a thing. However, the weird thing is that at the same time it has become easier to play, its also become less necessary: more Elite decks means fewer swarm decks needing dealing with.

The reason I'm NOT running an article for Rift right now is that the deckbuilding is pretty simple: pick a warlord, run more Elites, run the cards that help Elites be viable, then run Rift.

The reason I'm mentioning Rift now is that it's actually a great accompaniment for Doombolt, and for some other Ku'gath cards.

The cards here either feed command, or feed attrition, or benefit from attrition. All pretty straight forward.

Resources are needed beyond the usual discounting, so Gut and Pillage is in there. Just be aware how thin you are on shields, and don't overexpose Ku'gath to more damage than he can deal with.

Vile lab is actually really good here, as the attrition game reduces the number of units on planet 1 during the deploy phase, which can then force Vile Lab onto a proper target.

This deck is actually the one that works the best of the three tested here: unsurprising really, even the Orthodoxy is starting to find that in the current meta, Ku'gath is pretty damn good.

This is where Heresy signs off: four short columns encouraging you to re-examine cards that you might have rejected, and to think over the possibilities of experimental deckbuilding. The things you try might work, or they might fall flat: don't give in to unoriginality, just keep trying out new decks!

Let's face it: the rumor mill is increasingly certain this game is coming to an end, but the point of these articles is that even if that happens the game still has some life to it.

Take the cards you have, find new ways to use them, and get more gaming for your hard-earned dollars!

Hope to play many more games with all of you, no matter what happens!

Thanks for these articles, I tried out the Kuut of Zogwort yesterday and loved it! I lost, but only because I only drew my second elite (and third and fourth!) on the command phase receding a planet four final battle. (They were in the bottom 20 cards of my deck too! I'm not used to having so much command, clearly!!) Keeing Malceptor, Loamy Broodhive - one of the worst cards in the game??  Are we playin'the same game?

or maybe You just throw every Nid card to "crap-box" just like that;)

thats some true heresy my friend:)

Keeing Malceptor, Loamy Broodhive - one of the worst cards in the game??  Are we playin'the same game?

or maybe You just throw every Nid card to "crap-box" just like that;)

thats some true heresy my friend:)

Yeah, I was being deliberately inflammatory.

The problem with almost every synapse, in my mind, is that its not Stalking Lictor. My buddy Caldera plays a lot of Venomopollutothropovenom (or whatever its called)  and gets a lot of mileage out of that, but I still can't get any synapse to perform better for me than Lictor.

Loamy Broodhive? Well, a 1R support that conditionally gives you 2 tokens every time you play a support... that sounds good on paper. But to me, Termagants are far worse tokens than Khymera, Guardsmen or Cultists. Snotlings are just as bad, but are generated far more easily.

Then there's the state of the Tyranid elite game, which has as its discounting STC Fragment, and that's it. Sure, you could discount further on infested planets, but we're running into the realm of too much interdependency of moving parts, all ran out of a 6 card 6 resource start with a relatively weak command game.

Basically, I can the parts coming together rarely enough for Loamy Broodhive to be most likely to be 1R for 2 gants once, fairly likely to be a dead card in hand all game, and fairly unlikely to give 4+ gants.